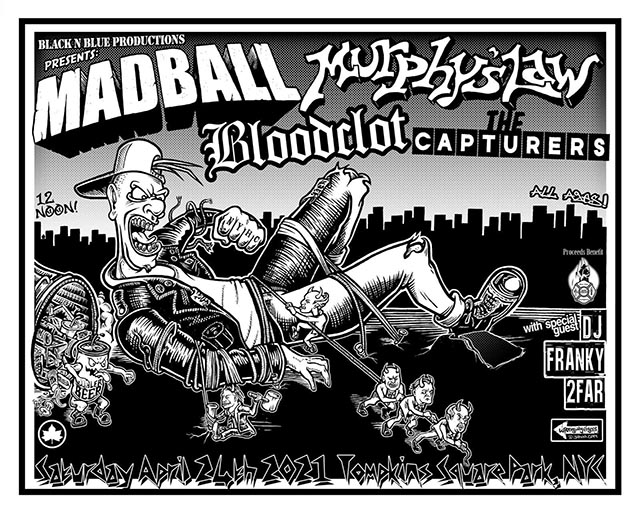 The New York City Parks Department is investigating a free NYHC show that took place in Tompkins Square Park on Saturday, April 24 after it violated several of the city’s pandemic restrictions.

Billed as a benefit for the New York City Firefighters Burn Center Foundation, the event was put on by Black N’ Blue Productions and featured sets from Madball, Murphy’s Law, Bloodclot (with former Cro Mags frontman John Joseph) and The Captures. The show was set to be one of the largest city-permitted events since everything shut down in March 2020.

However, more than 2,000 people showed up, most of which were unmasked and not abiding by social distancing measures.

In a post made to his Instagram, Joseph defended the show, comparing the event to last summer’s Black Lives Matter protests and a recent 4/20 celebration, saying:

“Yesterday in Tompkins Square Park History was Made. Well over 2000 people came out to a FREE show by the people for the people. It was a blast – we raised money for the FDNY burn unit and fed people organic plant-based meals. And let me say this to all the chumps and beeotch’s talking shit. For the last year in New York City there were protests – tens and thousands of people in the streets – some rioting and looting engaging in bias attacks – nobody said shit – the media condoned it. On 4/20 thousands filled Washington Square Park sharing blunts and weed pipes no masks – again nobody said shit. This was our fucking protest – this was our rally – people came out from all over the country and enjoyed live music! Those who didn’t want to come stayed away – good nobody Missed their ass. They were free to live in fear – hide under their table and talk shit on social media.”

A report by PIX11 also claims that Black N’ Blue Productions “misrepresented the event” on their permit application. According to the local news station, who say they obtained a copy of the permit, the event was supposed to be a “September 11th Memorial” “political rally with music and speakers” with an expected attendance of 100.

“I’m sure most people know the media lies almost all the time. But just for shits and giggles the permit says nothing about 911 Memorial on it!!  I have the permit in my hand. Fucking asshats .   Had look  at  it again to make sure but there’s nothing on it that says 911 Memorial LOL.”

In a statement made to Gothamist, a spokesperson for the Parks Department said:

“This matter is actively being investigated as the permit application filed and agreement appear to have been violated—future permits are in jeopardy.” That could mean that other shows, like the one scheduled for May 8 with Antidote NYHC, Kings Never Die, and the Last Stand, also in Tompkins Square Park, could possibly get cancelled. The flyer for that show, unlike the one for April 24, says that “Proper COVID-19 Protocol Will Be Observed.”

Council member Keith Powers, a proponent of the Save Our Stages Act who dropped by Saturday’s show near the end (and reportedly stood at a distance), told Gothamist about the event, “We’re all excited about supporting our music scene, but we still need to remember that we’re in a pandemic.” He also said (referencing a Gorilla Buscuits song) that he “reached out to organizers to remind them to ‘start today’ with better social distancing protocols.”

New York has been easing up on its Covid-19 restrictions over the last several months. Arenas will be allowed to open at 25% capacity starting May 19. The current cap for an outdoor event is 500 attendees. In all events, people are still required to wear masks and social distance.

In other news related to Saturday’s show, a photo of David “Springa” Spring of SSD, who joined Murphy’s Law on stage during their set, wearing a “Black Flag Matters” shirt went viral this weekend on Twitter. The caption from user @airbagged reads:

“imagine waking up less than a week after george floyd’s killer was sentenced to prison and a 16 year old black girl was murdered by police and deciding to wear a “BLACK FLAG MATTERS” shirt to perform in front of a predominately white crowd.” Black N’ Blue Productions responded to this tweet both correcting and empathizing, saying “‘predominately white crowd’ at a punk show in the LES ? 🤔…. total opposite of the truth , one of the most beautiful colorful crowds ever . 🌎 Please edit that . And yes this guys on stage is an asshat . Had no idea he was to be on stage . F him .”