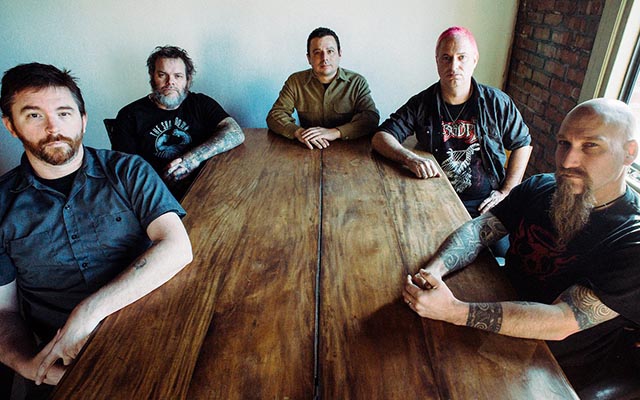 On Saturday (27th), Neurosis singer Scott Kelly issued a statement on Facebook admitting to abusing his wife and children while announcing he’s 100% retired from being a professional musician.

“Due to recent events, I feel that I clearly need to address some rumors and set the record straight. For the past several years I have engaged in the emotional, financial, verbal and physical abuse of my wife and younger children. When I became paranoid that people were going to find out, I found ways to keep my wife and kids from work and school and created divisions with friends and family members. I became obsessed with control and used threats, manipulation, threats of self-harm and suicide, inflicted physical damage on people and their reputations all to keep that control. When I knew my wife was going to leave I tried to convince her and others that I was crazy, and seeing things, and that I did not know what I was doing. She tried to help me with therapy and psychiatrists. My lies and deceptions fell apart in front of the professionals. When my wife finally tried to leave, I stalked and harassed her day and night and caused her and our youngest to live in a constant state of fear. I have lied or told half truths to so many people about so much of this that I can’t keep track of them. I don’t want to lie about any of this anymore. I love my wife to no end. She is the best person that I know. She is intensely honest, loving and good to her core. This letter is massive simplification of the irreparable damage I have caused and the unforgivable things that I’ve done to her and our kids. To say more in this public forum would not help anyone. As the truth has started to leak out there have been people who have tried to blame my wife for my abuse to give me an out and people who have spread ridiculous and damaging rumors about her. This is fucked. She deserves so much better. If you are adopting this mentality or spreading these rumors you need to fucking stop. I have some serious issues that I am dealing with and I have separated myself from anyone who is connected with my public life so that I can focus on my own toxic shit. When my wife has been kind enough to answer questions about my absence, she has faced crazy accusations. There was a recent situation that was so fucked up that it necessitated immediate action on my part to set the record straight. My wife absolutely speaks for me in my absence and I have already said she is intensely honest. If you don’t want the truth definitely don’t ask her questions. Additionally it is never appropriate to approach or question our children.

I know now that choosing to live a public life and be onstage was the worst decision that I could have made given the way that I am. I have hidden behind the attention and unfounded respect and adulation. I used my social position to directly and indirectly manipulate all of you and to hide the abuse of my family. I got satisfaction from my deception and perceived control of everyone involved. I am 100% permanently retired from being a professional musician. Some people can be in a scene like this where there is no accountability and maintain their integrity. I cannot. My sole focus for the rest of my life is on taking care of my family, allowing them safe space to heal and rebuilding their trust. I hope putting this out there will protect my wife from further attacks and finally allow my family some peace.”

Following Kelly’s statement, Neurosis went public explaining the band parted ways with the singer back in 2019 after learning about his behavior towards his family but keeping quiet out of respect for his wife and children, stating:

“A STATEMENT FROM NEUROSIS We cannot overstate the level of disgust and disappointment we feel for a man who we once called Brother. As a band, we parted ways with Scott Kelly at the end of 2019 after learning about severe acts of abuse he committed towards his family over the previous years. In the past, Scott had disclosed his marital difficulties and acts of verbal abuse, as well as his intention to get help and change his behaviors. The information we learned in 2019 made it clear Scott had crossed a line and there was no way back. We did not share this information out of respect for his wife’s direct request for privacy, and to honor the family’s wish not to let their experience become gossip in a music magazine. With Scott’s Facebook post of August 27, 2022 disclosing much of this information publicly, we can finally say what we believe needs to be said.

For the last twenty years we have lived far apart from one another and only saw Scott when meeting up to work on music or play shows. We had no idea what the reality was for his family when we were not around. By Scott’s own admission, his abuse was intentional, targeted, and a closely guarded secret – even from those of us closest to him. Once we learned of his abuse it was difficult to reconcile the horrible information with the person we thought we knew. It’s not surprising he hid the abuse for so long because it is a betrayal of our ethics as bandmates, partners, parents, and human beings. Since 2019, we have made numerous attempts to contact Scott. We wanted to have an honest talk about the status of the band and find out how he and his family were doing, but he has refused to speak with us for three years. And, in what we now see clearly to be a pattern, Scott refused to take responsibility for his actions. Having been through so much with someone for more than 35 years, one would expect some amount of closure, or at the very least a response.

Now, without returning any of the calls, texts, or e-mails of his bandmates and friends, Scott has made a public post about the situation. To us, this decision seems like another attempt at manipulation, another opportunity for his narcissism to control the narrative. Don’t allow Scott to make this about himself, it’s about the abuse his family has suffered. Usually, we would view public openness and honesty about mental illness as brave and even productive. We just don’t believe that is the case here. There is nothing brave about systematically abusing your wife and children. There is nothing brave about confessing wrongdoing when you have not done the work to change your behavior. There is nothing brave about refusing to speak honestly, or speak at all, with one’s closest friends and bandmates, people who have supported you and stuck by you for most of your life.

Compared to the impact of Scott’s actions on his family, the impact on our band pales in significance. Nevertheless, with the heartbreak and horror we also grieve for the loss of our life’s work and a legacy that was sacred to us. Again, our primary concern is for the safety and well-being of Scott’s wife and children, as well as anyone else in a similar situation. If someone you know is experiencing domestic violence or abuse, please reach out to one of the many local or national resources available. One national resource is: National Domestic Violence Hotline 1-800-799-7233 www.thehotline.org If you or someone you know is suffering from mental health issues that could make you a danger to yourself or others, please get help before you hurt yourself or the people you love. One resource for that is: www.988lifeline.org This is the only statement we plan to make about this issue. In due course, when it’s appropriate, we will provide more information about our future musical endeavors, but that time is not now.”

Sanford Parker, Scott Kelly’s bandmate in Corrections House and Mirrors For Psychic Warfare, issued his own statement on Facebook revealing he had no idea about the abuse, expressing:

“Just a friendly reminder: I barely use facebook so if you message me here I probably won’t see it, please email me here: [email protected] I only keep my account active as a promotional tool. The only time I check facebook these days is when someone calls me and says “did you see the crazy shit homeboy just posted?!” which leads me to my next topic. In response to Scott Kelly’s post I would like to make it crystal clear that during the active years of Corrections House and Mirrors for Psychic Warfare I had no idea the level of abuse Scott was inflicting onto his family. He always talked about his “mental illness” and things he did in the past he regretted, but nothing like this.

Over the last 12 plus years he and I have spent countless time together. I would be with him every second of every day for months at a time, often just the two of us and I have never seen this side of him. Not even close. It’s truly mind-blowing his level and power of manipulation he has on people. In January of 2020 Scott cut off all contact with me for no reason. I tried repeatedly reaching out via text, emails and phone calls and nothing. I tried several times reaching out to his wife but was told everything was ok. Then in March of 2021 she sent me a lengthy detailed email about the abuse she and the kids had experienced and it was honestly the most disturbing thing I have ever read, it made me physically ill. I wish I could unsee it. By that point though the damage had been done and as far as I knew they were away from him and safe.

I poured my heart and soul into Corrections House and Mirrors for Psychic Warfare and now they are rotten. I will never have the same pride for those bands I once did and that truly hurts. This has been hard for me to process over the past year, but by this point in my life I am used to it and I move on. I see a lot of people praising him for his honesty and that’s total bullshit, he deserves no praise. I have no sympathy for Scott and neither should you. I do have much love for his family and I really hope they are able to heal and move forward.”