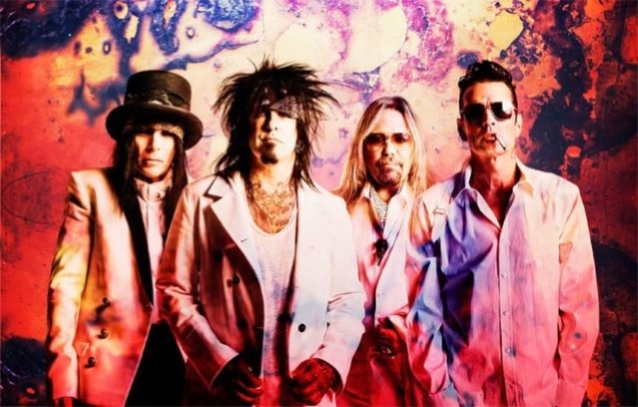 Mötley Crüe bassist Nikki Sixx says that the band’s setlist for its upcoming tour will include “hits, deep tracks and some cool surprises.” The Stadium Tour, will kick off on June 16 in Atlanta, Georgia and will conclude on September 9 in Las Vegas, Nevada.

In a post on his Instagram, Sixx included a photo of him with his two-year-old daughter, with the caption

“Early morning glasses club with Ruby!!-So happy to be home and missed @how2girl like crazy but I did have a successful time in LA working on new music with @fredcoury and seeing a few good friends. Great to spend the evening with @tommylee discussing #TheStadiumTour. Wait til you see the setlist. Hits,deep tracks and some cool [email protected] Look forward to seeing @thevinceneil & @mr.mickmars and the whole crew at rehearsals soon but right now we need to get back to Motown Magic and some waffles. #ItsTheWeekend #HomeSweetHome #Family #RocknRoll.”

During the presser announcing the band’s stadium tour, Sixx explained the band’s decision to return, saying:

“Honestly, I don’t think any of us thought, when we were on ‘The Final Tour’, we would ever get back together. We weren’t really getting along at that point. We had been together 35 years, and it had been a lot of years on the road. I don’t think we took a lot of time for ourselves off; we were just constantly touring for all that time. And when it came to the end, we broke the band up and everybody went their own ways. It was during the making of ‘The Dirt’ movie, we started working on the script, started being on the set, we started hanging out again together. And I think we really started to realize — without even talking about the music — how much we missed each other. And then that got us to go in the recording studio, which is where the whole thing always starts for all of us.”

The Dirt, is a film adaptation of Mötley Crüe’s 2001 memoir, featured four new songs recorded by the band expressly for the soundtrack.