Morbid Angel and Obituary were part of an $800 question on last night’s (11th) Jeopardy! The category was under “D.M Me” as the question read: “Morbid Angel & Obituary are popular bands in this genre.” The answer was “death metal.” 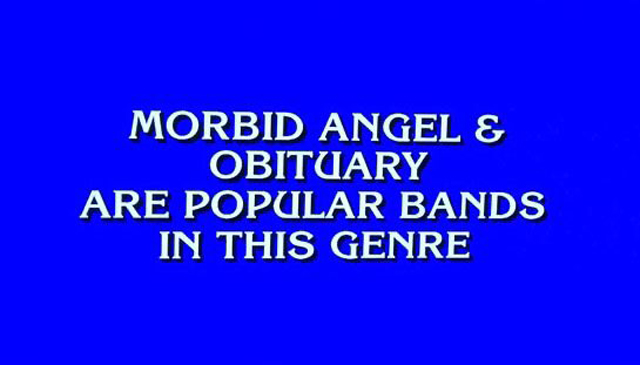 This isn’t the first time and hopefully, won’t be the last, when metal was mentioned on Jeopardy! Just this year alone, we’ve seen Lizzy Borden, Rob Zombie, and Five Finger Death Punch featured on the show.

Jeopardy! is currently in its 36th season, and Alex Trebek has been the host since 1984. Despite being diagnosed with stage four pancreatic cancer this past March, the 79-year-old icon has continued his role between chemo treatments. During the same episode, contestant Dhruv Gaur wrote, “We love you, Alex!” with a drawing of a heart for the word “love.” Trebek was visibly moved by Gaur’s message. The Gainesville, GA contestant wagered a total of $1,995 of his $2,000 earnings in the Final Jeopardy round to leave the heartfelt message as his answer. Those who watched the show would notice the change in Trebek’s voice when he read the message out loud, followed by, “Oh, that’s very kind. Thank You.” However, this led Trebek to tell Gaur, “You’re left with five bucks.”

Back in September, Trebek revealed he would need another round of chemotherapy. The host has been fighting a long battle, resulting in him no longer being afraid of death. Contestants have been supporting Trebek as Avi Gupta, who won the teen tournament back in June has recently donated over $10,000 for pancreatic cancer studies at the Knight Cancer Institute in Oregon.

With all the attention coming my way, I want to also re-up this play-along for Pancreatic Cancer on Thursday and Friday. Many of us are donating $1 for every question we get right when playing along at home to the Lustgarten Foundation for Pancreatic Cancer Research. Join along! https://t.co/0BzrvDo3RC

I’m just very grateful I got the opportunity to say what I know everyone was thinking. Sending all the love. #weloveyoualex

When Final Jeopardy came up, I could’ve tried to puzzle it together, but really, just kept thinking about Alex, and thought he should know. 3/n

…for context, Alex had just shared with us that he was reentering treatment for pancreatic cancer. We were all hurting for him so badly. 2/n

Obituary recently announced an East Coast tour with False Prophet and Extinction A.D. check out the tour dates below:

Next week, Morbid Angel will embark on their U.S tour with Watain and Incantation. Check out the tour dates here.