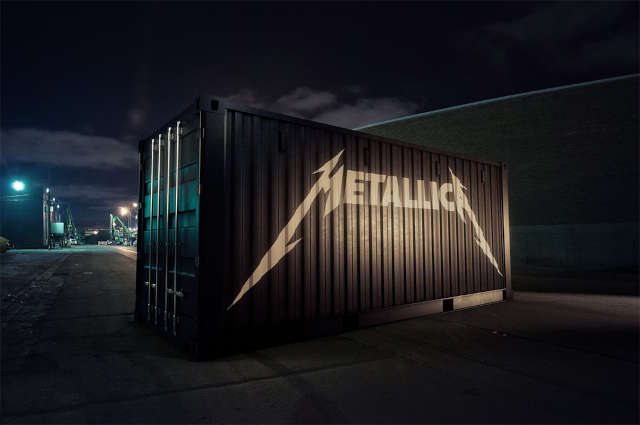 Metallica have announced the opening of The Metallica Black Box. The Black Box will offer an unprecedented and ongoing deep dive into every era of Metallica from the early 1980s garage days up to today and beyond. Follow the bands evolution through the items held dear by the band members themselves.

“We’ve been incredibly fortunate to travel to all corners of the planet, meet so many amazing people, and do things we once only dreamed of. And when you’ve been around for 40 years, you manage to collect a few things! Along the way, the four of us have hung on to many keepsakes, photographs, articles of clothing, sketches, and so much more, stashing these items away in attics, garages, and storage spaces.”

James Hetfield, Lars Ulrich, Kirk Hammett and Robert Trujillo will “unbox” their collections, pulling their favorite, most significant, and personally meaningful artifacts out of careful storage. Much more than a “gateway” to all things Metallica, The Metallica Black Box, in collaboration with Inveniem and Definitive Authentic, will provide access to the memories and experiences of the band members themselves, as it transports those who enter to virtually every imaginable time and place along the Metallica historical continuum.

The Metallica Black Box launches with The Black Album Exhibition, featuring a collection of items curated to share in support of the 30th anniversary of the Grammy-winning, 16-times-platinum-certified 1991 album that not only gave Metallica its first No. 1 album in no fewer than 10 countries, including a four-week run at No. 1 in the U.S., but remains unchallenged as the best-selling album in the history of Nielsen SoundScan, outselling every release in every genre over the past 30 years.

We’ll continue to add to The Black Album Exhibition with additional artifacts posted before the end of the year. Next year we’ll return with new exhibits, including a 40-year retrospective and a showcase of the incredible creations of the brilliant graphic artists we’ve worked with over the years. Grab a beverage and a snack and dive in deep to The Metallica Black Box!”