Metallica has announced a “San Francisco Takeover” as part of the band’s 40th anniversary celebrations next month. Among the events being planned are performances by Taipei Houston, featuring Myles and Layne Ulrich, sons of Metallica drummer Lars Ulrich. Also performing will be the band Ottto, the three-piece band featuring Tye Trujillo, son of Metallica bassist Robert Trujillo and The Wedding Band, which is the side project of Metallica guitarist Kirk Hammett and bassist Robert Trujillo, along with Whitfield Crane vocalist of Ugly Kid Joe, and Bad Wolves guitarist Doc Coyle.

Metallica said in a statement:

“We’re just one short month away from celebrating 40 years together, and we can’t wait to welcome fans from around the world to our hometown! When we first told you about the two shows at Chase Center on December 17 and 19, we also promised a full weekend of ‘Tallica family vibes with curated live music, Blackened Whiskey tastings, and other events starting the night before the first show. Well… we’re back with all the details!

The festivities get started early with our friends White Reaper, who graciously appeared on the recent ‘Metallica Blacklist’ album, playing at August Hall on Thursday, December 16. Other ‘Blacklist’ artists Goodnight, Texas and Kamasi Washington will also be hitting the stage around town during the weekend at various venues, or you can check out the Ottto, Taipei Houston, and Bastardane show… a few of the musicians on stage may look somewhat familiar!

Of course, the Blackened Whiskey team will be everywhere with welcome and pre-show parties, specialty cocktails, and drink specials. There’s a film-fest rolling some of our concert movies on the big screen and an opportunity to see some of the finest METALLICA tribute bands. Photographer extraordinaire Ross Halfin will be busy all weekend signing books, doing a Q&A with our own Steffan Chirazi, and hosting a gallery show.

Tickets go on sale this Friday, November 19 at 10 AM PST. Already set to attend the two Metallica shows and want to make sure you get in the door at every other official, ticketed, Metallica event in San Francisco that weekend? A very limited number of ‘Takeover the 40th’ upgrades will also be available on Friday.

Upgrade includes entry for one person to each of the events below that require a ticket (must be 21+ years of age to attend) along with:

– One signed setlist from each of the 40th Anniversary shows

Full schedule [is available here] and additional city-wide activities will be announced soon. Please note that San Francisco proof of vaccination and mask requirements apply to all events. For more information, visit SF.gov.”

The Metallica announced 40th birthday celebration is a massive event taking place all over San Francisco! 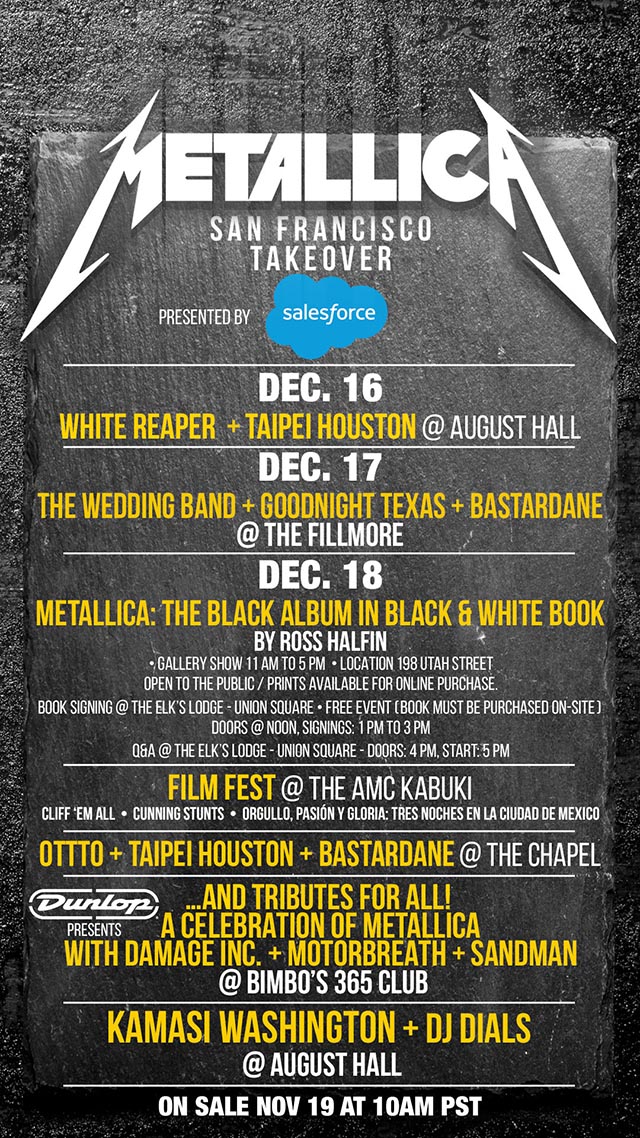