Last night (1st), you may have feared celebrating the New Year was off to an ugly start. Based on one story reported on the Entertainment and Gossip website, Radar, claiming Ozzy Osbourne is “on his deathbed.” Given this was the only report. It wasn’t very easy to believe there was any truth behind it and their alleged sources. Since the disturbing news made very few headlines, a screenshot has been floating around of a recent Instagram post by Kelly Osbourne denying these allegations, stating:

“Today, I had a wonderful start to 2020. I went out to lunch with my family. Then spent the rest of the day laughing and hanging out with my dad. I come home to read sickening articles about my dad supposedly being on his “death bed.” Sometimes the media makes me sick!!! It’s no secret that my dad has had a rough year when it comes to his health but come the FUCK on this is utter bullshit.”

We agree with Kelly as this alleged false reporting wasn’t fair to Ozzy, his family, friends, and fans. One week before the report, Ozzy’s son, Jack Osbourne, shared an image on Instagram, revealing a photo of him and his family on Christmas with the Prince of Darkness himself.

2019 wasn’t Ozzy’s year as he spent most of it recovering from health setbacks that all started with the case of the flu. Finally, things started looking up for him when the genetic mutant rescheduled his tour dates and surprised us all revealing his collaboration with Post Malone. This didn’t stop there as he announced his first album in ten years, Ordinary Man, will arrive sometime early this year. He also released new music! Fans have been concerned about his overall health for most of 2019. To see his sudden comeback has been a relief.

With the digital age, there’s been an increase in fake news where you’d see fabricated stories published over serious journalism for the sake of financial or an opinionated gain. Journalists Resource reported back in 2017 that these misinformed articles will not go away anytime soon. While it looks as though Kelly’s Instagram post has been removed, we can only assume Ozzy is doing OK until an official statement is made saying otherwise. 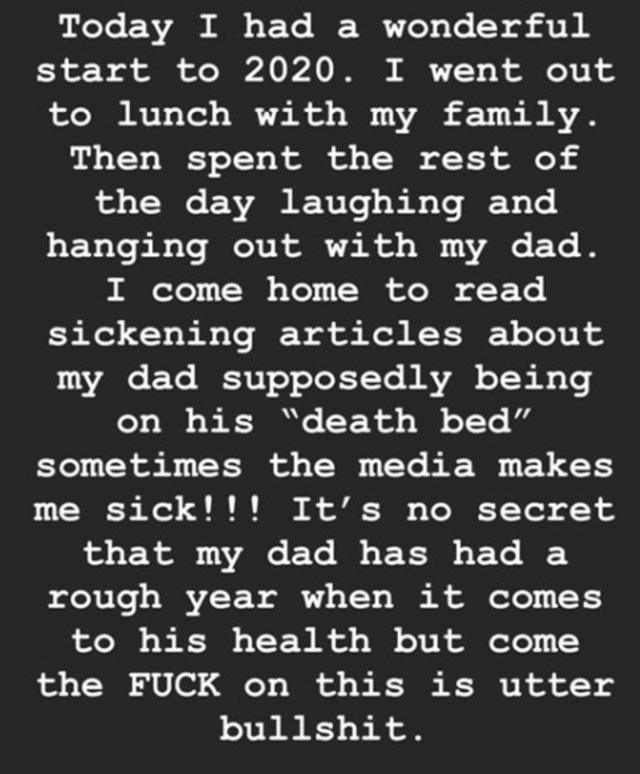