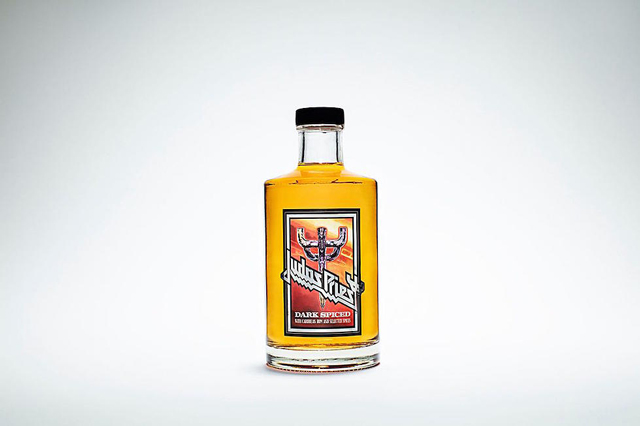 Judas Priest Spiced Rum was released to the Swedish market on Wednesday (23rd) in a limited run of 5,000 500mL bottles. Bottles are available for 349 SEK through Swedish retailer Systembolaget.

The band’s first foray into the world of spirits, Judas Priest Spiced Rum was created in partnership with Swedish marketing company Brands For Fans. “We are thrilled to announce the release of a new rum produced together with Brands For Fans,” said the band in a statement announcing the product. “The complex nature of this new blend and the general versatility of rum goes hand in hand with the music produced by us over the last 50 years. It’s rum with a touch of evil.”

Said Brands For Fans of the collaboration:

“Judas Priest, a truly legendary band. Who’s not heard of them? Such an honor to be able to create this spiced rum with the band.”

Brands For Fans has been collaborating with rock artists and festivals for years on special alcoholic beverage releases. The company has previously worked with artists such as Motorhead, Scorpions, In Flames and festivals such as the Sweden Rock Festival.

In other Judas Priest news, frontman Rob Halford said in a new interview with Yahoo that he would like to be a judge on Ru Paul’s Drag Race.

Halford said the following in the interview:

“I am a RuPaul’s Drag Face fan. I just love that show just for every emotional dimension of what’s being presented… the interaction, and the support, and the fun, and the bitchiness, and all this kind of stuff. It’s great. It’s a beautiful insight to a part of our world and it’s really important.” He even suggests a premise for which he would be an expert judge. “Get all the drag queens in full-on metal. Let’s do it, Ru!”

Halford, who came out in 1998, has a lot of love for the exposure of shows like Ru Paul’s Drag Race and Queer Eye have brought to the LGBTQ community.

“Show like Ru’s show, or the Queer Eye show, these things are wonderful opportunities for people that don’t know about us. Just to look and listen and learn. That whole thing about we are your bus driver, we are your nurse at school, we are your judge court. We’re their airline pilot. We are everywhere. Just taking away and destroying this horrible pushback that we have.”

The rocker also got political on the matter, talking about how this “pushback” is still a concern going into 2020. Though not a naturalized US citizen yet, he remarks,

“Even today we’re about to get to 2020 and we still have to talk about this. Particularly in this current climate here in the U.S. it’s terribly, terribly difficult.”

“We’ve been practically ignored by this current administration. And thank God that [Trump] won’t last forever.”