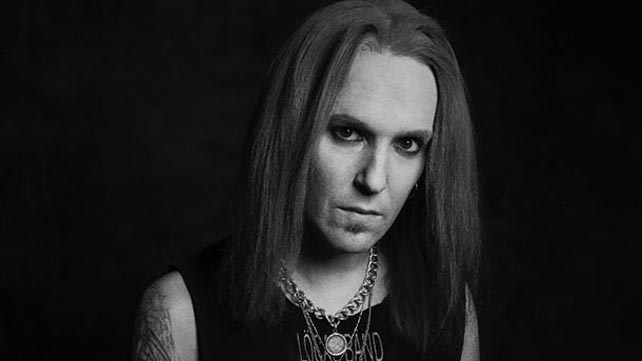 Children of Bodom/Bodom After Midnight frontman/guitarist Alexi Laiho’s cause of death has been revealed. According to his former Sinergy bandmate Kimberly Gross, whom Laiho never legally divorced, the frontman died of “alcohol-induced degeneration of the liver and pancreas connective tissue.” A cocktail of painkillers, opioids, and insomnia medication was also found in his system during the time of his passing. Laiho passed away on December 29th, 2020, in his home in Helsinki, Finland. He was 41-years-old.

“This morning I received the final forensic report with the official cause of Alexi’s passing. As his legal widow, I am privy to this information. The certificate reads in Finnish, “Alkoholin aiheuttama maksan rasvarappeutuminen ja haiman sidekudostuminen”. The English translation is, “Alcohol-induced degeneration of the liver and pancreas connective tissue”. Furthermore, he had a cocktail of painkillers, opioids and insomnia medication in his system.

The loss of this extraordinarily talented and beautiful soul is a tragedy that was entirely preventable. He had so many good years left in him. Imagine all the amazing music we could still be getting if he had just accepted help. I plead with anyone who is struggling with alcoholism or any other substance abuse problem, to please seek support. You do not have to meet this same fate. If people are trying to help you, remember that they are doing it out of love and concern, so please do not push them away. Please do not surround yourself with enablers who promote your addictions. Let this be a cautionary tale that no one is invincible.

I do not want his death to be in vain. My hope is to eventually start a memorial foundation or charity in his native, Finland to help others struggling with these same demons. This needs to be an open conversation, not a source of shame. We are all human, we all suffer, but help is out there. If his story can save even ONE life, then something good can come out of this horrible loss we have all endured. Rest in peace, beloved Wildchild”

Annihilator’s Jeff Waters, who had his run with alcoholism, responded to Laiho’s cause of death by sharing the difficulties of addiction and what led him to get sober:

“So just heard from Alexi’s wife that his autopsy report showed death from “alcohol-induced degeneration of the liver and pancreas connective tissue, with painkillers, opioids and insomnia medication.”  Alexi and I hit it off right away, back in 2003. I loved his playing and he loved mine. We loved the same guitar players, too! From day 1, however, he would ask me thing like: “How did you quit alcohol?”, “How much did you drink?” and “Didn’t you go through withdrawal and how did you defeat this?” Well, I’ve met MANY who drink excessively but wish they could stop. Sometimes, I get befriended by “stars” who know MY story and feel safe confiding in me about theirs. It is a good feeling when I hear that they have got help, kicked the addiction, etc… BUT more than not, they get to that point of confiding and wanting to get help but then go right back to their former addictive and often deadly ways. Then, they stop talking to me when they are back using. Sadly, Alexi was one of them. HE REALLY WANTED to get clean. Addiction is a nasty fkr. Denial is a HUGE factor. My denial finally ended in the most strangest way: an episode of the Oprah Winfrey show. Yes. The Oprah Winfrey show!

The show featured an alcoholic mother who was trying to say she didn’t really drink much and “only beer”. I thought “hey, that’s like me!” Oprah asked her how many beers she drank a day and the woman replied “8-10” and the crowd let out a huge “OOOOHHHH NOOOOO”.

I didn’t know how to react because I was drinking 10-16 beers PER NIGHT! (that fact was also laughed at by 2 of the Pantera guys on March 4th, 1992, in Vancouver, when they asked why I wouldn’t drink with them. I told them I quit a few months ago… they said “Is that all you drank?” and laughed. HOWEVER, one of them came over quietly later and asked how I “did it”…

The next day, I felt very ill but I ate lots and slept a lot.

BUT the 2nd day, I was watching TV and noticed what I thought was a moth or butterfly inside my shirt. I was not an insect: IT WAS MY HEART. I took my pulse and it was around 180 bpm. RESTING HEARTRATE. I called 911 and said that my heart was literally seen through my chest. She said “sir, what kind of drug did you take, Cocaine? Speed?”  I said “I don’t do drugs!”. She sent the ambulance asap and assumed it was a drug overdose.

Basically, I was poised for a heart attack. Literally a few more minutes and I would have had one. The doctors asked me a few things and then figured out I was going through withdrawal.

WOW! I was weened of alcohol slowly, then released.

I did NOT want to die. I love life, so I knew I could never do that again. So I didn’t drink for 4 years after that, when i slowly introduced a few beers here and there… but it slowly crept up over the next 3 years until I realized “OK, I am not going back to that former addiction excess” so I stopped for good. No AA. No help. I did a lot of reading on addiction and living with it … I did it. decades of sobriety now. But for most others, at this level of addiction, getting help is exactly what should be done. No shame, No blame. Getting/Asking for help actually shows strength and love of life. So often people become so addicted to mask horrible things and a crappy start to life makes it hard to see that life IS worth living, no matter what the past was like.

Babbling over. I promise! Alexi and countless others DID want help… it was just beyond their capability to ask, get it and continue sobriety. If you have or think you have ANY addiction issues, get help: it shows you are strong and you WILL make your life special, no matter how crappy or hopeless things are or have been. IT JUST GETS BETTER.