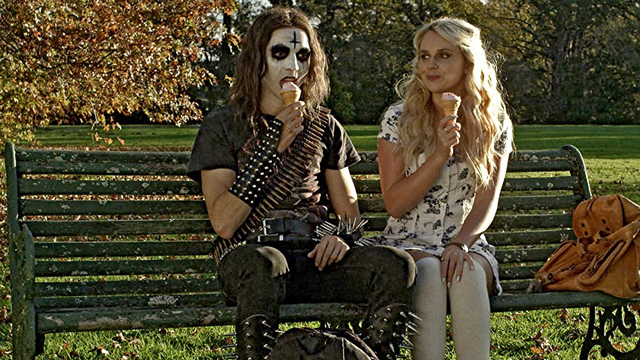 As time progresses, the older you get, the harder it is to find the match of your dreams, a match decent enough to date, or a person joining you at metal shows. With online dating apps like OKCupid, Plenty of Fish, Tinder, Bumble and what have you, for a metalhead, you tend to run into people who are not your type. Typically, many will settle and compromise their own personal interests, but there are several out there still looking for their fellow metalhead. As embarrassing as this could be, I am one of those who is honestly looking for a match where I can be myself, go to shows and festivals all over the world with someone that has the same interest and desires. It is not easy to find like-minded metalheads, and earlier this year, an event at Brooklyn’s St. Vitus created by comedian Dave Hill called “Speed Metal Dating” sought to remedy that.

The event, held on April 10, 2016, at St. Vitus felt very publicized, as the press was all over the venue. I initially went to this event to see what the fuss was all about, and hell, it was going to be my first “speed dating” event in my life. I anticipated it to be more guys than girls, and well, I had no idea what to expect. The event surprisingly had a fair mix of roughly 38 women and 38 men. The music was blasting where you had to shout at each person you spoke with, and I don’t even think they knew how to properly time each “date,” since time did run out and we were unable to speak to everyone. The crowd at this particular event was a mix, I managed to meet a few guys who weren’t into metal at all but curious about the publicized event. Others were mainly St. Vitus heads or looking for someone and a few were looking for a female concert buddy. I had a few decent conversations, laughs, and added a few on Facebook. Did real romance spring in the air after that? No, it did not.

With Speed Metal Dating a long lost memory since that Spring evening, this past Saturday (3) fellow Brooklyn metal bar Lucky 13’s Saloon decided to do the same thing. It amused me as they featured an image from the movie Deathgasm (if you haven’t seen the movie, you should) and well, I was again, curious how this one would turn out. This event appeared less publicized than the inaugural St. Vitus event, but it did end up having a similarly large turnout.

Now I’m a person that loves to experience, observe and maybe even take a chance to find a real, “mate,” so of course, I was there for the occasion. I had no idea how this one would turn out, and part of me thought it would be some random exchange at the bar. This event had two rounds one for hetero and one for gay. I only experienced the hetero portion of the night since things did run a bit late. The event started at 10, and we sat in the back room. No one knew what they were doing or had to do, so it was a bit confusing for many, including myself. It ended up you had to wear a name tag, followed by writing your name and phone number on a numbered index card. On that card, you wrote the number of a person that you liked, and at the end you would receive a text message from the coordinator stating who your mutual matches were. In theory, that’s a cute and fair idea, but no one knew they had to do that.

The crowd was a bit mixed, but this time, there were more men. Lucky 13’s is not an easy bar to get to, taking me almost two hours to get there, but there were people from Connecticut, New Jersey, Harlem and all over New York, making a true effort to find a match. While some women appeared to be metal fans, that wasn’t always the case, like one a male friend spoke to that only liked Pearl Jam. Likewise, there were a few guys that sort of ruined the fun, just there for the hell of it and not even caring about music at all, especially metal (that one was the longest four-minute date of my life). From my experience, I noticed quite a few good looking men and enjoyable fun guys to converse with. There were a handful of socially awkward men who appeared terrified to speak to women and one I had to give a bit of a breathing lesson to feel better and comfortable. A few women looked nervous as well. The age group ranged from early twenties to late forties, where I think a few did look like they were in their fifties but I’m not entirely sure. The organization was missing when at first they had half the girls leave the room to do two different rounds. It was a bit of a mish-mosh and hopefully, if they do this again, I would suggest letting people stand and having everyone in the room all-together.

Once the hetero round was complete, no one knew what to do, since we wanted to know who our “matches” were. This is what I thought was the most hysterical – after the event was over, the men went back to ignoring the women, and it turned into a typical night at Lucky’s that included one of the exotic dancers that showed up later in the evening placing their boobs on my face. After an hour or so having a few drinks with friends, I observed a few men that I “dated,” and noticed them ignoring the women, looking at the dancers, or awkwardly standing alone waiting for the results.

When all is said and done, I would suggest that people not be afraid to speak to each other afterwards and to attend these events without any expectations. You never know who you will find, or you might end up having a good time and making new friends. I did not expect how much fun speed dating would be and the best part about it with Speed Metal Dating is the obvious common interest. I think more people should be less shy about it and try it out. It’s not that scary; we are just humans having a conversation about the music and lifestyle they love – metal.