This past May, Mayhem announced their new album will arrive on October 25th and today (12th), these Norwegian black metal legends have revealed the title of their overall sixth studio effort. Daemon marks the follow-up to 2014’s Esoteric Warfare as the band explained:

“‘Daemon’ isn’t a direct follow-up to ‘Esoteric Warfare.’ Like all Mayhem albums of their time, ‘Daemon’ is unto itself. The wolf solitary and singular. Indeed, “Daemon” also isn’t a new chapter in our storied career. Rather, it’s a new tome, authoritative yet wild in character. Composed and decomposed with the same lineup – Necrobutcher (bass), Hellhammer (drums), Attila (vocals), Teloch (guitars), and Ghul (guitars) – that handled ‘Esoteric Warfare’ and performed ‘De Mysteriis Dom Sathanas” in its entirety over the last few years, ‘Daemon’ isn’t a retrofit of classic songs like “Freezing Moon,“”Pagan Fears,” or “Buried by Time and Dust” either. That’s what the live album, “De Mysteriis Dom Sathanas Alive” (2016), was for. ‘Daemon’ is change, an opportunity for the maw of hell to open wider.”

Pre-orders will be available on August 30th. In the meantime, check out the track list and artwork by Daniele Valeriani below: 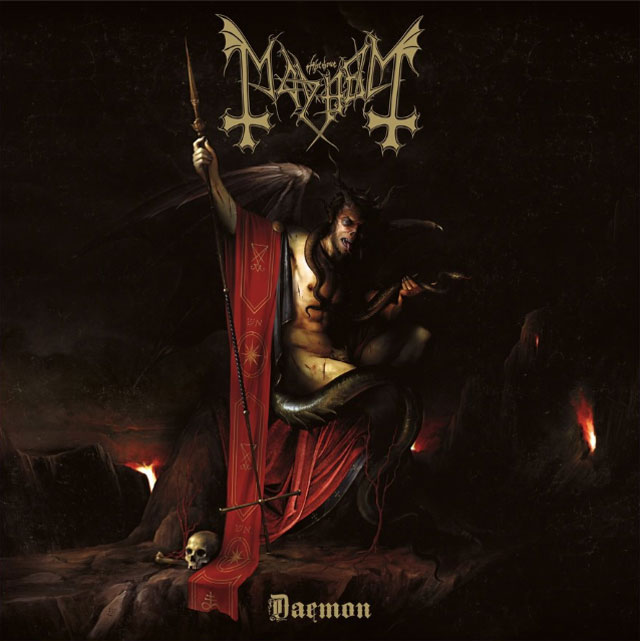