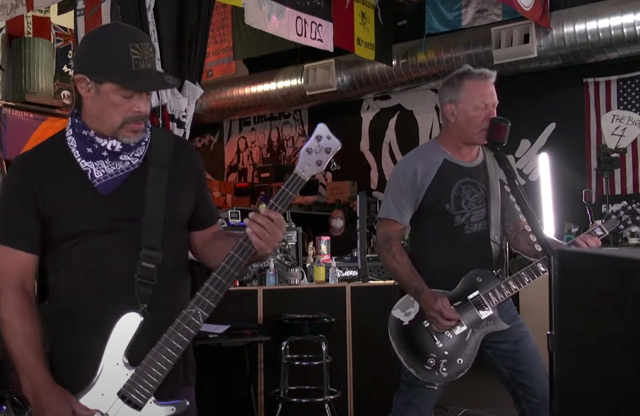 Metallica made an appearance on Howard Stern’s SiriusXM show on Wednesday (12), talking to the famed shock jock and performing three songs.

The band announced the appearance on August 9, saying, “Our great friend, and ever loyal Metallica supporter, Howard Stern has invited us to pay a virtual visit to his show this Wednesday, August 12. It’s going to be yet another first during this very unusual time as we’ll be hanging in Northern California at HQ and chatting with Howard while he’s camped out in his home studio. In between the banter we’re going to fire up the amps, get behind the drums and beam a few songs live to Howard as well.”

During their appearance, the band played three songs, including “Wherever I May Roam,” “The Unforgiven” and “All Within My Hands.” Videos of all three performances can be seen below.

While on the show, Metallica also discussed aspects of their history. Starting things off, Stern asked the band if they felt any pressure to fall into the “glam metal” scene that was unfolding around them. To that, James Hetfield responded, “We were far too ugly to look like women,” with Lars Ulrich more seriously saying adding, “These are our peers now and we totally respect these guys in different ways,” though they used to be “the enemy, the opposition, that was who stood in our way for achieving what we wanted to do.”

Stern also asked about the band’s much maligned 2011 collaboration with late Velvet Underground frontman Lou Reed, ‘Lulu.’ Even though the album was thoroughly panned by critics and fans, the band felt that working with Reed was a “rewarding experience.” Though Kirk Hammit complained that Reed would not let him use his wah wah pedal, Ulrich said that he “wouldn’t change a thing.”

The subject of Hetfield’s sobriety also came up in conversation, with Stern asking how he’s holding up during the pandemic. Said Hetfield, “For me, it’s a real blessing that I get to be home in Colorado for more than two weeks. Now, being at home … [I’m] building a community of friends that I did not have before.” Last year, the band had to cancel their Australian tour to give the frontman an opportunity to enter rehab. Earlier this year, the band also had to cancel two of their five Danny Wimmer Presents festival dates that conflicted with events Hetfield needed to attend for his recovery (before all five had to be postponed due to the pandemic).

This is the first time Metallica has appeared on ‘The Howard Stern Show” since 2016.

The full episode from Wednesday can be streamed now on SiriusXM.

Last week, it was announced that Metallica would be producing a concert film for the ‘Encore Drive-In Nights’ series that is set for release at drive-in theaters and pop-up drive-ins around the country on August 29. Said the band in a statement, “We’ve been rehearsing at HQ for a show that will be shot specially for the drive-ins at a location nearby later this week and then we’ll pass it off to our award winning production team to then be edited and mixed at the highest standards possible to be beamed into your cars from the big screen.” The band will be the first rock act to be featured in the series and the second musical act to take the stage (Blake Shelton premiered a set back in July). A list of theaters around the US and Canada showing the film can be found here. Tickets for these showings are available now.

The drive-in show comes the day after the release of Metallica’s upcoming live album, ‘S&M2,’ on August 28. The album captures the band’s shows with the San Francisco Symphony Orchestra  from September 2019 celebrating the 20th anniversary of the original ‘S&M’ album. 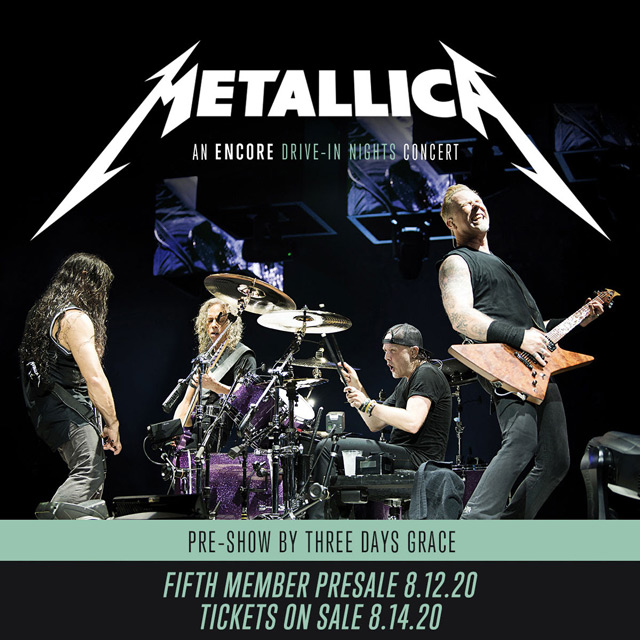