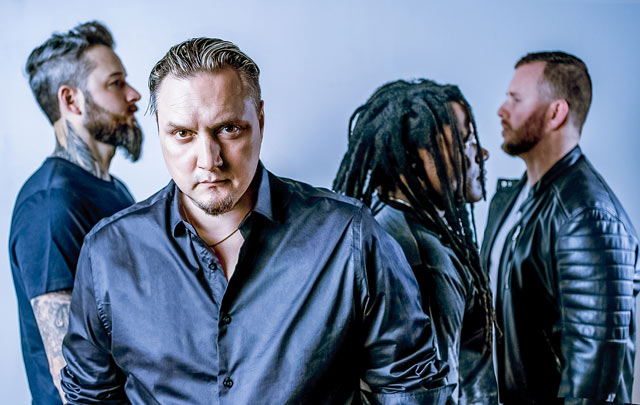 After a nine-year hiatus, Canadian hard rockers Stealing Eden are back! Last month, the group officially returned with a brand new single, “Edge of the World.” However, there’s a lot more planned than one single as they are working on a new album along with a North American tour. Shortly after the band’s debut, Truth In Tragedy, they had to step away from the industry after a series of conflicts between their record label along with personal disputes. Nine years and over five-million Spotify streams later, the group is back, and we caught up with frontman David Ottoson to learn more about their return.

Looking back, what created your initial hiatus after your debut album Truth in Tragedy?
There were a lot of factors, member changes, friction with the record label, personal issues.
Together it became just too much to handle.

How long ago was it when you decided to regroup?
I’d say 3 years ago, Max (guitar) and I bought our debut album (Truth in Tragedy) back 5 years
ago from our label and have spent a lot of time since then building our own label, learning
business and marketing and slowly got to the point where we are able to to release more new
music.

What challenges did you face when you decided to reform?
Mostly scheduling, all of us work full time or own our own businesses, Max and I have kids so
it’s a juggle. Slowly working towards touring soon.

Can you talk more about the single “Edge of the World?”
Edge of the world was one of those songs that just refused to be written till it was ready lol. It
literally had dozens of chorus/verse combinations, only part of the song that never changed was
the intro riff and the bridge. Truthfully, right up to just before we needed to release a new song
we still hadn’t committed to all the parts. But I think what we finally went with, ended up
perfect.

Moving forward, is there anything you can reveal to us on a possible new album?
For now, we are just focusing on releasing singles and waking up all our dormant fans (we have
been away awhile), I think mid 2021 will be the first full release. We are planning on going down
South to work with Chris Dawson (Saul, Any Given Sin) he has been mixing our new stuff but
We are excited to have him produce our next full length.

Do you have any touring plans for this year?
None yet but we are planning to do some shows coming up here in Canada. We do everything
ourselves (manage, produce, market etc) we’ve had a few offers but nothing that fits yet.

Overall, how does it feel to see the return of Stealing Eden?
It feels great! Can’t wait to get back out there.

Is there anything else you want to say or add to your fans?
We want to thank all our fans that stuck around with us and put up with us promising new music
but then letting them down. So thank you for putting up with us! We won’t let you down again.