Texas death metallers Creeping Death have unleashed their debut album, Wretched Illusions, on September 27th via eOne (order here). Their record has already been featured on year-end lists, including Revolver’s Best Songs of 2019. While the band is wrapping up their tour with High on Fire and Power Trip, guitarist Trey Pemberton managed to take some time to speak to us about their new album, the Texas death metal scene, and more.

How has the reception been so far with your debut album, Wretched Illusions?

It’s been amazing so far. People have said so many nice things and put it on a bunch of lists and all sorts of stuff. It’s been overwhelmingly positive. Everyone’s been giving us a lot of big ups and props. It’s been awesome. I wasn’t sure how it was going to be exactly, but it’s definitely exceeded my expectations

What are some of the challenges getting this album made?

Definitely trying to write it and record it in between, all of us have other jobs, and we went on a couple of tours in the winter while we were in the process of recording the album. So that kind of held things off. Our producer that we used back home, he’s a friend of ours named Daniel Schmuck. I’m actually in another band with him called End Time. He recorded and produced it with us, and he’s got a full-time job too. So just coordinating everybody’s schedule is going out of town, and working on stuff, that was the biggest challenge.

Having a full time job and working on other projects can get tough. Can you talk about the initial formation?

We’re all from the Dallas DFW hardcore scene, so we’ve all known each other for years. I played drums in a hardcore band with Rico. He played guitar in it for a little bit. So we all knew each other. We all wanted to play a different style of music that we never played. We’re all metalheads as well as hardcore kids. So we were just like, Oh, why don’t we try something new? You know, have fun and jam with our friends. At the time, we were all pretty much living in Denton. Dintech was not too far. I was in school going to UNC, it started as a fun thing, just wanting to branch out and start something new.

And now you’re touring with High on Fire, how did that come together?

I think it was because they’re on our record label, eOne, and then Power Trip was already on tour. They’re from Dallas, we’ve known them for years. They’ve been our homies for awhile. They come from the same hardcore scene we do. So there was that avenue, and then I think there was some other avenue somewhere in the background, but there is basically three ways pulling for us. Then it all came together at once, and it worked out.

I don’t think I can announce the tours yet, but we’ve got some plans in January. We got stuff going through the spring. We plan on being on the road for most of 2020. Hopefully, we can get over to Europe sometime next year, too. Just expect to see us touring the US Canada, hopefully, Europe and beyond next year.

How’s the death metal scene out in Texas?

There’s always good metal and hardcore bands. We get punk bands too. There’s always something coming out of Texas that has a little bit of a metal tinge to it. It’s pretty sick. Pantera comes out of Texas. So everyone’s a little bit, even if they don’t want to admit it, are a little bit influenced by them whether they like it or not. That’s just how it goes. Some of my favorite bands coming out of Texas right now – Kombat, another sick death metal band Skeleton from Austin, Texas, is another really good band. There is a lot of cool stuff coming out, even out in Lubbock, our homies Judiciary. They’re killing it right now too. So the whole state is becoming the best metal coming out right now.

Are there any albums that stand out to you that was released within the last 10 years?

Oh man, there’s like 550 albums. I can sit here and rattle off. I feel like there are a lot of consistent bands out there, where I’m like, “Oh, I really like this.” One of my favorite bands in the world is Blood Red Throne, a death metal band from Norway. Probably one of the reasons this band even started. They consistently release new music. I really like Skeletal Remains, that’s another one. They released an album last year. Power Trip’s Nightmare Logic and Manifest Decimation both came out this decade. Mammoth Riders released a bunch of stuff. Blood Incantation has a million being this day and age. It’s crazy. I just named a bunch of stuff. I guess that will have to do, but I can keep going for hours.

Is there anything else that you want to say or add about your debut album?

Thanks to anyone who’s checked it out. Thanks for all the support and if anyone wants to try to support and buy our merch, records or anything like that. Head over to creepingdeath.net, it’s got all of our links to everything, all the socials, the important information. A big thank you to our fans because we never really thought anything like this would happen. This was just kind of a fun thing to do with our friends and it took off. It’s been amazing since. 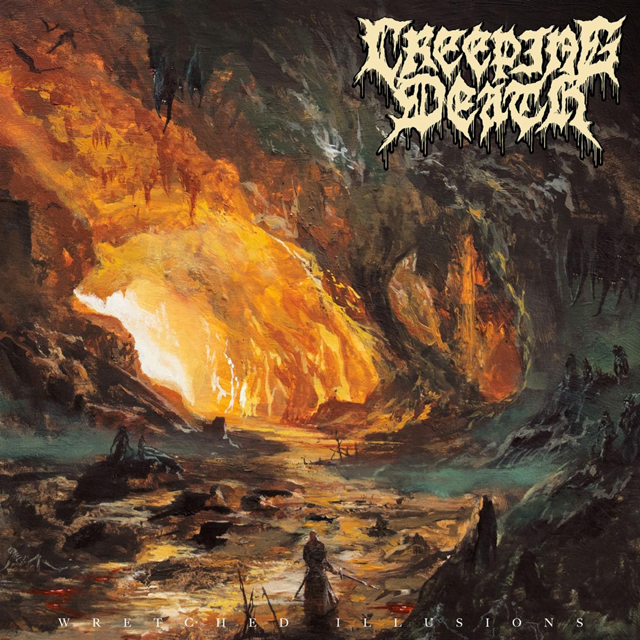