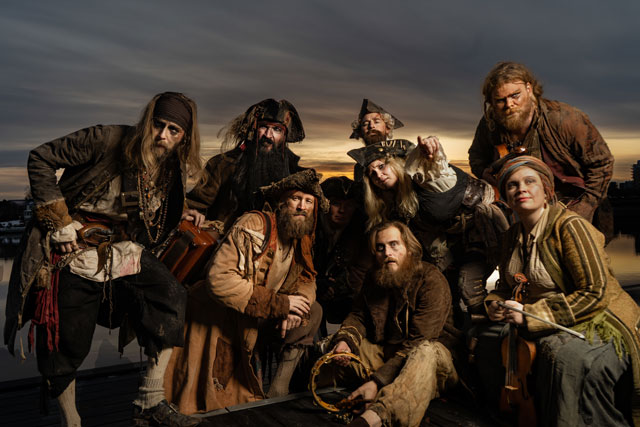 While bands such as Alestorm highlight the pirate life with drinking in Mexico and having live shows with the famous inflatable duck, there’s Ye Banished Privateers that showcase a darker side of the sea rover. The group’s new album Hostis Humani Generis was released on Friday (7th) via Napalm Records (order here). Their latest effort demonstrates the harsh reality that lurks behind the life of a pirate. We were interested to hear more about this group consisting of at least twenty members as these Swedish sea-folk explorers explained how their record label allows a “band with the impossible name make the album with the impossible title.”

How long have you been working on the new album, Hostis Humani Generis?

The concept has been ready for a long time since it’s based on actual historical events. Most of the songs were written during 2017 and 2018 with this in mind, but we’ve been saving a couple of ’em for longer than that. We went into the studio in april 2019 to record the songs and since then many hours have been put in to perfect the sound.

What is the overall process like to create the album, especially having over twenty members?

Everyone who has song ideas bring them to our rehearsal space. That’s where we make arrangements and breath the Ye Banished Privateers spirit into the songs. Our biggest strength is that everyone is good at different things. Someone creates amazing hook melodies, someone else is great at writing lyrics, making vocal arrangements, mixing, creating artwork, etc in addition to the fact that we have a lot of really good musicians in our group.

How would you compare Hostis Humani Generis to your prior efforts?

This one is by far the most cohesive of our albums, we have had the story and vision for this album pretty clear since before First Night back in Port. When it comes to the sound, the biggest difference is how much we have grown as songwriters, as musicians and as a band playing hundreds of live shows together. There’s a lot of detail in the arrangements as well as in the lyrics and compositions. 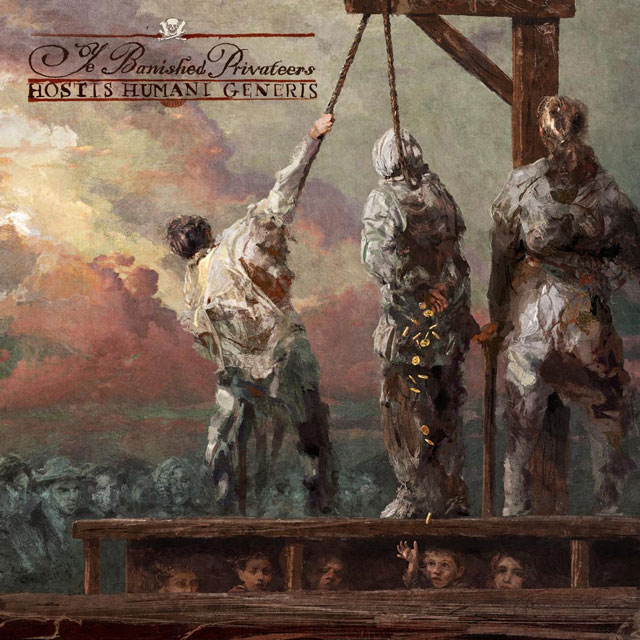 Based on the artwork, the record seems to show a darker side of the pirate life. What are some of the themes of the album?

All of the lyrics follow the theme of the duality of piracy. Today we think of pirates as pistol wielding party characters with treasure maps and hidden trunks of gold. We try to focus more on the real humans behind the myth. In the eyes of many, Pirates were violent criminals with little respect for human life. To others, pirates were devoted fathers, brothers and sisters, who had no other choice than to break the law in order to survive or provide for their families. Behind every person labeled as an enemy to all of mankind, there is usually a deeply tragic story to be told. In our album, we focus on a few of these individuals and their path to the gallows.

What was the experience like on the video for “No Prey, No Pay?”

It was like it always is with us. We forget to record the video in summer and suddenly we are in a run down barn in the harsh nordic winter trying to pretend we are not freezing our asses off. The highlight was watching Hampus chasing cockroaches with his mouth and revel in the thought – at least I am not him.

With such a big number of members in the group, can you discuss your live shows?

Sure, we work on developing our live show all the time with cool effects and different ways to engage the audience. We do have some props that we use but we tend to change the way we use them up a lot. Also most of what we do on stage is improvised. We have a lot of fun together and try to not always tell everyone what’s going to happen. In that way we are always on our toes!

Do you have any plans for a North American tour or one-off shows?

We sure have our sights set on North America. We do have dialogue with promoters and we know that there are people who will support us when we get there, and we can’t wait to meet them! There are no definite plans that we can share with you right now, but we can promise that it’s going to happen.

Is there anything else you want to say or add on the new album?