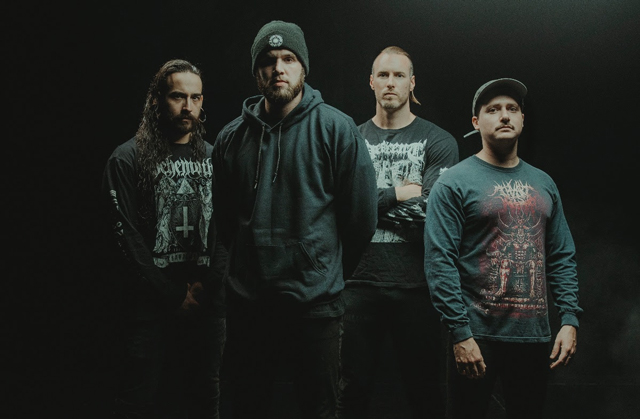 Australia’s mechanized death metal group Aversions Crown released their new album Hell Will Come For Us All via Nuclear Blast Records on June 12th. We sat down with drummer Jayden Mason to learn more about the record and his time in quarantine.

So, how’s quarantine been treating you?

Man, it’s been all right, apart from obviously not being able to work at home, and the biggest part not being able to tour, play our music, it’s been all right. Everyone is safe on my end, my family and stuff are well. And all my really close friends and people that I know in my life are all good. So, cannot ask much more than that in terms of how it’s going. But it is also shit at the same time because we can’t do anything. And it’s easing off a little bit now, but still not being able to get out there and play the music is definitely pretty taxing, taxing on my mental stability, on practice, and staying motivated and all that sort of stuff. But that’ll come back once this is all over, I’m sure anyway.

During quarantine, many bands have stated that they have been staying creative by writing new songs, teaching lessons or working on side projects. Is that something that’s happened to you?

Absolutely. Yeah, big time. The band has definitely been putting the time into writing our material and working on stuff that we don’t normally get the time to work on as well. I’ve, I guess, tried to take my practice to a whole different section of things I wouldn’t really have the time to practice, normally getting ready for a tour for this band and stuff. So, that’s definitely something we’ve done as well, which it’s cool. It’s weird, you don’t realize how much time you don’t have when everything’s really busy and then when it’s like this, it’s like, “Oh, wow, you can do all these other things as well,” which is kind of odd, but it’s cool.

You guys have dropped a new record, Hell Will Come For Us All via Nuclear Blast. What was the main driving force of this album?

Oh, man, I think that the maturity of the music was the main driving force of the record that we’ve tried to really hone in on and focus on. The writing and creating songs that we feel in a live situation, will be fantastic for the crowd, fantastic for us to play and just all round enjoyable. So, that’s definitely one of the big drives is the music and obviously, the slight change in what we’ve been trying to do as a band, is got us all amped up for the release of this record, which is super cool.

How long did it take you to write and record the album?

Well, this one was funny because it was… The process took way too long to be honest because we had some funny things happen along the way. And obviously, we recorded all the instrumental stuff for this record in Australia, in Queensland, actually where I live, up at the sunshine coast and with one of our really good friends, Matt Shorter, he was the engineer for all that. But then obviously that was all sent off over to Will Putney to be mixed and all that stuff. But in the interim of recording all the instrumentals and touring at the same time, we had to do it part by part and within that whole time of that happening, we had this vocal change situation which drew out the process quite substantially.

So, it is what it is. It’s worked out perfect in the end, but the process was definitely a little bit more prolonged for this one than normal. But we were writing those songs pretty much, not straight after our last album Xenocide, but a few months after that we got into compiling material and starting to write songs for the next one, which obviously, it’s all led to this and it’s turned out well in the end.

Can you delve into why it was so prolonged?

It was pretty much due to just the tours and we had a lot of stuff booked and whilst that was all happening, Mark, our previous vocalist, had a change of mind in how he felt and he was struggling with touring. He was struggling with band life in general and dealing with a lot of stuff. So, pretty much his departure from the band did prolong everything because then we had to pretty much pull the reins back and go, “All right, we’re in the middle of getting this record sorted, what do we want to do?” sort of thing. So, it presented a lot of different options for us, but obviously, they weren’t options that we could just make a decision on overnight. We all took our time to think of the best solution to the band and the future and what we were doing.

So, that’s honestly the main reason why it was prolonged so much. We just had a lot on our plate and a lot of decisions to make in terms of where the band was going, and help Mark along his way to get to where he wanted, and it all just built up to the point where we’re like, “Oh, wow, time flies and we’re still trying to get the rest of this record sorted.” But it still didn’t obviously change the experience of it. The experience of doing the record was still fantastic. It was just different to the last ones.

While dealing with all that was happening, was there one track that was sticking out to you while this whole process was going on?

Oh, that’s a good question. Not really because I pretty much recorded all the drums and we had a lot of that happening pretty early in the interim before the whole situation escalated to a point where these big decisions were trying to be made. So, I wasn’t really focused on that whatsoever when I went into record the drums. I was just fully focused on what I was there to do and tried to put as much effort into every single song, every single track as I could. So, I had a clear mind, clear pathway of what I was doing in terms of my part for that record. So, I can’t really narrow it down to one song standing out because they’re all such a big challenge for me and they were super fun to write and create. So, that’s the best I can do to answer that one, I think.

Well, it’s definitely something we’ve spoken about. We haven’t delved into it too much because even though everything is coming back to, I guess, some form of normality, that there’s still a lot of weird stuff going on in the world and we’re not entirely sure what’s going to happen with the U.S., what’s going to happen in Europe and what’s going to happen in Australia in terms of traveling and show congregation, large amounts of people. But we absolutely would love to and have spoken about doing an album launch show, headline Australia tour, U.S. and Europe. It’s something that is definitely on the books but we just haven’t delved in selected dates, timeframes or anything like that because it’s almost near impossible because we keep getting told so much different information. So, it’s almost impossible to try and reorganize or organize any shows and tours at the moment, which is a bit of a bummer.

What’s something fans can look forward to? And are there any upcoming projects we should be looking out for?

Yeah, for sure. Well, in terms of the band, we’re super busy, even though this record is about to come out, we’re already working super hard for future stuff and we’ve got a lot up our sleeve and a lot that we want to get done once obviously, we’re allowed to get out there and play shows and stuff again. But in terms of new music and stuff like that, there’s some really cool stuff happening. So, I reckon that’s the biggest part for everyone to look forward to. Especially us, we’re so keen to show off more of what we’re trying to do and where we’re going, and we just love writing music for everyone to listen to. So, it’s going to be sick. It’s going to be a good looking future, I reckon.

Grab your copy of Hell Will Come For Us All here.