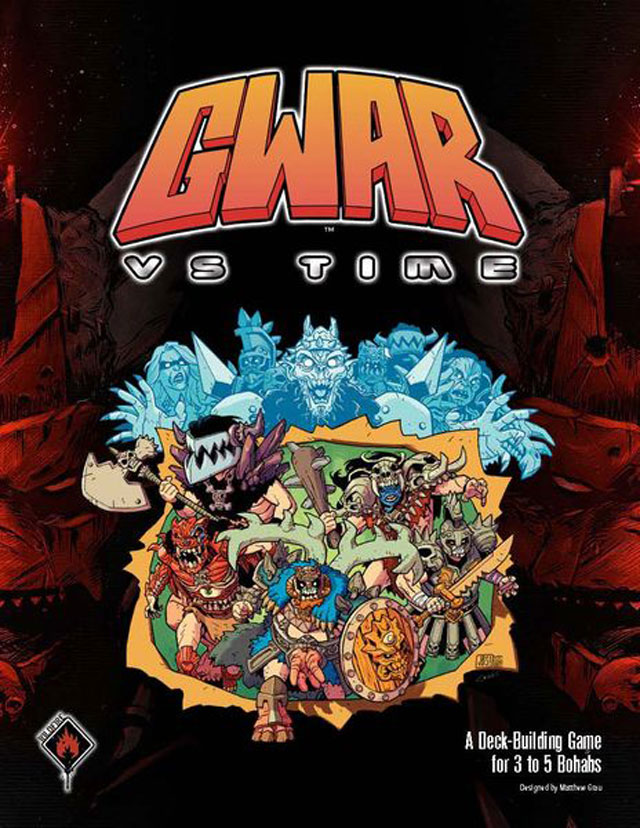 It’s no secret that the members of GWAR are a bunch of full blown nerds. The Scumdogs of the Universe have released a Wargame, comic books and even the late Dave Brockie wrote his own RPG adventure. I’d be willing to bet some money that there are some scruffy neck beards under their alien skins/carapace; that same money the folks over at Slave Pit Inc. are out to get by any means possible! To quote the great Mel Brooks: “Merchandising! Merchandising! Merchandising!”

The next ploy to separate Bohabs from their money is GWAR vs Time, a Deck building game from the folks at Wildfire Games. In case you haven’t heard of them, they make Space Poo The Card Game, which I assume was the deciding factor in getting the GWAR license.

To get the inside scoop on this intergalactic scam, Metal Insider sat down with the Chief Game Designer/traitor of the human race, Matthew Grau. GWAR vs Time is set to release March 2020 and just raised $46,124 through Kickstarter. (Which means they have already scammed 495 people without even shipping them anything!)

What’s your background in gaming, heavy metal and planetary conquest?

My background in gaming is diverse. I’ve been writing and making worlds professionally since I was a teenager. I’ve worked with a number of licenses, including Dungeons & Dragons, Frank Herbert’s Dune, Star Trek, and Star Wars. I was one of the primary narrative designers and world-builders for League of Legends, starting from before the game was launched. I have also won several awards for game design and presentation, and was a protege of Dave Arneson (co-creator of D&D) and have worked with Margaret Weis and Tracy Hickman (Dragonlance).

My background in metal I guess goes all the way back to Die Krupps, a German band generally considered to be one of the first Industrial bands. The music sounded like it was made in a warehouse, banging on all sorts of interesting things. I bring them up, because they were my introduction to harder forms of music. Like anyone my age, I then grew up listening to a lot of Metallica, Judas Priest, and Black Sabbath & Ozzy. Naturally, I’m a big GWAR fan and have been hosed down at several shows.

And my background isn’t planetary conquest, but more in planetary extinction. Sort of like Flab Quarv VI. I’ve actually destroyed several worlds, but you’ve probably never heard of them. But really, it’s just a hobby.

How did this come together? How did you connect with GWAR?

A Bohab named Sol Blair found out the band wanted to branch out into games again. He told our licensing agent, Jessica, who proceeded to interview around 20 game companies who expressed interest. We were the last to pitch, and we said the right things to make Matt Maguire think we were a good match.

GWAR has been a genuine pleasure to work with and I’m very happy this has come together. We all have fun doing this kind of thing.

You’re pitching your kickstarter now to fund the retail release: why not tap into GWARs vast riches instead?

Have you met Sleazy P. Martini?

What are some highlights of the Scumdog universe that GWAR vs Time touches on?How many presidents do players get to kill ?

The luxury of a deck building game is that you can create a lot of different cards. We put in all kinds of stuff from throughout GWAR history. There’s something from every album, as well as some new stuff. For example, there’s Viking Death Machine from The Blood of Gods, Madness at the Core of Time from Battle Maximus, and characters from the Morality Squad from the early album America Must Be Destroyed. New stuff includes Toto Destructo, who was mentioned as a footnote somewhere, so Matt Maguire drew him up, or deciding what Captain Carnage actually looked like. It also includes fallen members of GWAR, such as Oderus Urungus and Flattus Maximus.

Oh, and no presidents in the game so far. Pretty sure Blothar is killing one in his image, though.

So far you’ve list Kickstarter backer tiers, but only so much in terms of development steps. What’s the road ahead, post-funding?

Post-funding is going to be a lot of work on it’s own. We have to manage the surveys, get everything manufactured, which may end up coming from several sources, and make sure that we get our backers what we’ve promised in a timely fashion. We all hate it when a Kickstarter takes forever to fulfill.

We’re about to start discussions with GWAR about what we want to do next. It seems like we’ve got a good marriage here (Jizmak da Gusha’s words), and we’re excited to do more work together. Naturally, if GWAR vs Time is successful, we’ll look at doing a card expansion. There’s a ton of fodder in the GWARverse, so we won’t be repeating ourselves.

People who play board games and Gwar fans, what do you think is the link there? (Besides the smell)

From my experience in the adventure games industry, there are a lot of gamers who are secretly serious metal-heads. Others not to secretly, like my friends Travis and Damon. It’s a great match for those people.

Our first indication that there was crossover was last year when Wizards of the Coast had a booth at GWAR-B-Q, selling Magic: the Gathering and Dungeons & Dragons. They sold product to a lot of people at the festival, finding the secret gamers under the metal.

I guess a lot of metal has its own imagery and, in some cases, story. There’s a theatrical element to it and a lot of people like the imagination in addition to the music. It doesn’t seem like too big a step to float that imagination into games that are imaginative.

I hope we can create more Bohabs out of gamers who like the game, but haven’t seen or listened to GWAR. They need the full experience.