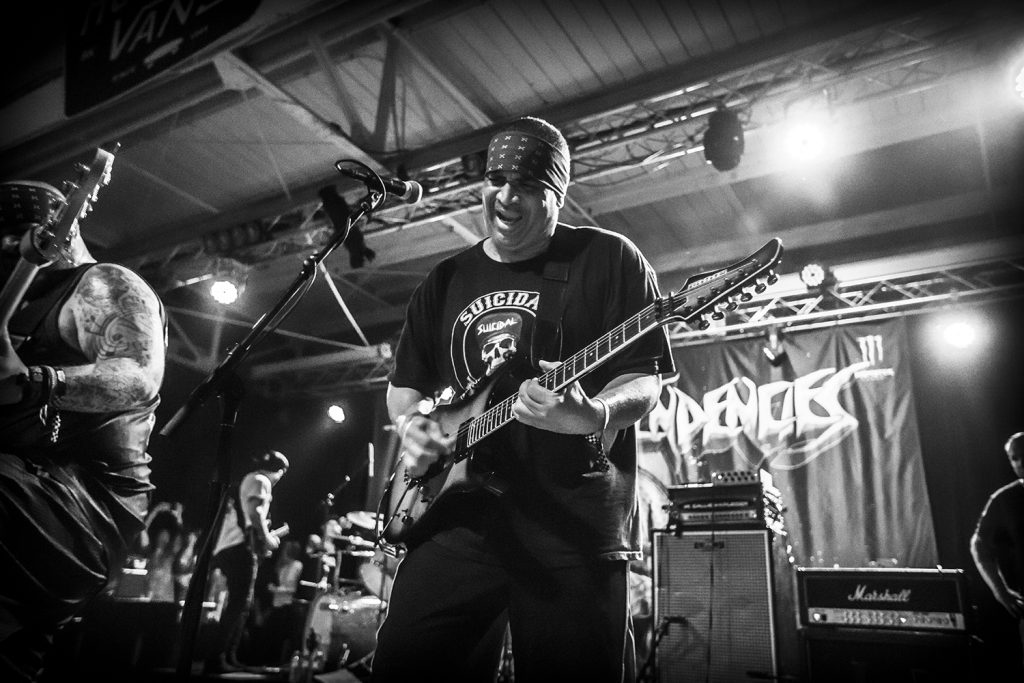 Suicidal Tendencies recently released Still Cyco Punk After All These Years and celebrated the release with two shows this past weekend on the East Coast bringing out Sick Of It All and Iron Reagan as well as playing the bands very first album in its entirety. Having attended the Boston show, I can assure you it wasn’t one to miss. ST’s guitarist Dean Pleasants took some time to speak about the new album, being the bands longest-running guitar player and what the future holds for ST.

Suicidal Tendencies just finished playing in Boston and Washington D.C. over the weekend. How did it the decision to play the band’s first album in its entirety for those two shows come about?

We did it at the House of Vans in Brooklyn for the 35th anniversary of the album so we decided to do the same thing for those shows for the Converse collaboration release so we wanted to play the first record there and throw in some of the old school and some of the new so that’s how that came about. It was really cool to do, in that I always love to do songs off their first record like “Subliminal,” “Possessed,” you know all those songs. I think it’s also cool to also play in front of all new generations, if there’s kids there that haven’t heard some of the songs off the first record maybe it’ll spark their interest you know?

How is it to see such a wide variety of generations coming out to the shows nowadays?

My first concert was opening up for Ozzy Osbourne when I was playing with Infectious Grooves. Me and Mike were talking backstage before the show and there were people there that had their grandkids here, and that’s when you know you have a deep fan base. In the past five years, we have people walking up to us that saying ‘hey this is my son and he’s 27 years old,’ with his kid there and then to have him saying his first concert was Suicidal and his sons first concert is Suicidal. For us, its really cool. I never imagined I would be a part of it but now I am. I don’t feel old, but it’s awesome to have three generations at our shows. Then there’s kids that just came on their own – they see people wearing the swag, see people with Suicidal on their chest or riding the skateboard and they got a flip up hat and they want to know where that came from and what it’s about. They come see us and they say ‘ok, this is Suicidal!’ And it’s really cool to talk to them and see them at the show, just keeps us going and gives us energy.

After a couple of weeks off you’ll be bringing out Madball, what can fans expect from the rest of the tour?

Still Cyco Punk After All These Years was released last Friday (7). What kind of feedback have you received since that?

You know everybody on my Facebook and friends all love it. At first some people were like ‘oh is this another Cyco Mike record, then they hear it and they go ‘shit this is wild!’ I think because when you say remake, people think you’re going to make the record exactly how it was, but not us, that’s not how Mike works. We’re going to try to push the boundaries, push the limits and to have Dave Lombardo come along it just put the thunder on it and gave it a whole new life and a whole new fire. Playing these songs has always been fun for me. I’ve actually toured with Cyco Myko several times and playing these songs in a different way is really cool.

From being in the band for so long how do you feel about the bands current lineup with Ben Weinman and Dave Lombardo?

It’s great, its great playing with Ben I call him the Shining. He’s crazy, I look up and he’s standing on top of the roof or something waiting to jump into the audience I don’t know what he’s going to do next. Then Dave man, when Dave first got in the band in 2016 it was like the most amazing thing, we both really needed each other. It’s kind of like bumping into a friend you haven’t seen in a while. The first practice, we were all just looking at each other like ‘this is going to be real fun,’ and with Dave this music just fits him. People know him from Slayer, but when he came in and started playing the old punk stuff, and he just looked at us and said ‘man I love the first record, that was my shit.’ He just started playing it, and we were all amazed. We’re still on the honeymoon with Dave. It’s just amazing, the fans love him. A lot of Slayer fans probably wouldn’t have watched Suicidal or come to the shows if it weren’t for him.

After releasing an EP and an album this year, will it be a bit until we can expect new music from S/T?

I never know. Mike always surprises us. We’ve talked before and said we might do an EP and another record. Not sure if we’ll do another one, but hey we did this one, so I couldn’t really say. I don’t want to put words in anybody’s mouth, but there’s always that possibility.

After seeing so many lineup changes since joining the band in 1996, how does it feel to be the bands longest reigning guitar player?

It’s funny someone was asking me about that recently and I haven’t even thought about it that way. Time doesn’t seem to equate to me, because it’s just been fun. I remember somebody walking up to me saying ‘you’ve been in the band longer then Rocky and Mike Clark.’ I know both of those guys very well. When I was in Infectious Grooves and toured with Suicidal, I hung out with Rocky and Robert. Me and Rocky would go over a lot of cool stuff, he showed me a lot of cool funky riffs. It’s definitely an honor. Robert Trujillo actually introduced me to Mike and that’s how I started playing with them. We didn’t even have a name, but became Infectious Grooves and we were just doing jams in the studio. We became friends and we stayed that way, and I think that’s where the longevity is. We both respect and understand each other. I think that’s the simplest way to put it, and you go from the there. The road isn’t always without a pothole here and there, but we get along and we respect each other. To me, this is where I want to be and I’m here and I’m very proud of the longevity I’ve had in the band.

Over the past few years you’ve gone out with Megadeth, Slayer, have done various festivals such as Ozzfest and Knotfest. What else would you really like to see in regards of the band touring moving forward?

All those things are great, playing with big bands like that is fun. Megadeth is very cool Dave Mustaine is always good to us. Slayer was very cool with us. Slipknot were amazing and the coolest people. I never even realized how huge they were until we started playing with them. As far as next, I think just continuing to grow our fan base and whatever comes we take it on as an adventure. A few years ago we played on the Motorhead Motorboat, and that turned out to be one of Lemmy’s last shows. We obviously didn’t know that was going to happen, but we were honored to be asked to do the show. We weren’t sure how to feel about being in a boat in the middle of the ocean playing metal, but it was the coolest thing in the world, and all the bands were awesome.

I think with everything you get offered or you try something different, you make it what it is, so with Suicidal whatever we do were going to be Suicidal. We’re going to do our thing and be cool to the fans. We’re blue collar, we’re the peoples champs, we’re hands on. People know us, we talk to everybody, we sign autographs, give out picks, sticks you name. We love to keep that kind of family thing going, so if something else cool comes up we’ll try it and see how it goes.

After 35 years of Suicidal Tendencies do you see any slowing down at this time?

We all have our aches and pains were all older haha, Mikes mending his back all the time keeping himself healthy and in shape my back started hurting recently but hey we all get out there and do our best it’s always fun getting out there and playing on stage I look at it this way, I approach every show I play as if it’s my last one no matter how I feel every fan that comes to the show deserves to see the best music they can possibly get and that’s how we all feel about it. I think there is still a spark in life in us I don’t know how much longer we’ll go maybe 5 or 6 years who knows but I definitely think there will be a few more years for everyone to check out Suicidal.