After a relatively short but much needed hiatus, Swedish folk metal outfit Falconer has returned with their release of Black Moon Rising earlier this week on Metal Blade Records. I was lucky enough to have a chance to sit down with guitarist, songwriter and band founder Stefan Weinerhall (Falconer, ex-Mithotyn) to discuss the the album, and what the band has in store for the future, which may or may not include some European Festival dates.  The album can be streamed in its entirety here, and is available for purchase in the United States here.

Just fine. I actually just opened my box of new CDs, so I got them today, about a week after the European fans got them.

Well it’s an awesome album, I can’t wait for my copy to show up.

Yeah, I’m very proud this time. I think we’ve “woken up” so to speak.

I’ve been a fan for quite a few years, you should be proud of every album you’ve done. Going off of what you did with your last album, Armod, and it’s been awhile, was it hard getting back in the swing of writing and recording.

Yeah, I haven’t had this long a break of songwriting and guitar playing as with this time. I think it was a good thing. I could just relax and be away from music in order to musically reboot. I didn’t just continue where I left when I started to write for this one. I think it was a very good break. I think I got a little nostalgic during the break because I got a bit unsure about the future of the band since I’ve had some family tragedies, not to talk about that too long, but I decided not to take any drastic decisions at that time. I just pushed the band away for the moment, and when I came back I was a big nostalgic and started listening to the old bands I used to listen to maybe 15-20 years ago, and the old Mithotyn albums, and the old Falconer albums. So I think with this album, musically, I got the same kind of inspiration as I had 15 years ago, a bit more “hungry” so to speak, not as laid back as maybe Armod was—Slower tempo, acoustic songs, sung in Swedish, not very intense album, but it was time to change and shape up .

I’m sorry for your loss, but I’m glad you’re back. This album sounds heavier, and more guitar -oriented, than those in the past. Was that intentional from the start, or did it just happen as you were writing?

I think I had the idea when we recorded the last one [Armod] I knew that “Ok I really want to start doing riffs, and you can double-dip bass up a bit more, so this is gonna be a faster and more heavy album.” that was clean from the start, but then of course my rough one or two years colored my songwriting in some kind of way. It didn’t really bring more positive lyrics, but it was a chance to write off some aggression or frustration, which I think now afterwards, was a good thing and I think the album benefited from it.

Many of your songs in the past have revolved around Swedish historical events. Is that the case with Black Moon Rising.

Actually for this album the majority of songs are not about history at all, although whatever I tend to write about I try to, in my not-too-colorful English language, I try to impersonate some kind of Shakespearean English poetry in some kind of way. I like the sound of that kind of language, if you know what I mean, even if I sing about greedy, modern politicians who destroying the world just to make an extra bucks. Environmentalism, I think we’ve done it in the past too, but a couple of the lyrics are about it for this album. The almost extinction of the Native Americans is the topic of “Dawning of a Somber Age”, for example. But, the two last tracks [“Age of Ruins” & “The Priory”] are among the first Viking lyrics Falconer has done.  I got the inspiration for that as I, I cannot say that I did read, but I tried to read, the entire book of How to Decipher Rune Stones and how the grammar and the language has changed over the thousand years in Scandinavia. My grammar isn’t top notch, but I did my best and it was very intriguing reading. And how they talked upon poetry, verses, and rhyming 1000 years ago, it really inspired me.

That’s really cool, because it does not show in the lyrics.  It seems like you would have a really good grasp of the language.

That’s the main idea in a ways. [Laughs]

With Armod being entirely sung in Swedish, does your writing process differ between writing in the two languages?

No, not musically. I just thought that for Armod, concentrating on the folk elements of the music, the music just told me that it had to had Swedish lyrics because it would just be a mismatch otherwise. It’s not as easy to write in Swedish because I’m not as familiar with the poetic kind of writing, I’m just used to the everyday Swedish and you can’t really sing in that language, it just sounds dumb. It’s easier to express yourself with English, but I wouldn’t say that the creation of either the music or lyrics differs that much depending on the language. It’s a bit harder in Swedish, I’m not as smart maybe, if you want to sell a lot of albums. Although we don’t sell a big amount of albums anyway, we had to do that album. It was just a matter of time that we did a more folksy album.

That’s surprising; I thought it would be a lot easier to write in Swedish.

I’m not just used to it, but a lot of sentences sound corny to a Swede or pretentious. Maybe it does in English too, but I don’t realize it. [Laughs]

Since Mathias [Blad] isn’t a typical metal singer, is it hard communicating with him musically with what you are trying to do?

Well of course it is easier to talk about the arrangement or the ideas of a metal song with fellow metalheads, so to speak. With Mathias you can’t really say “Do that thing that Halford used to do,” ”Huh? Who? Halford? Never heard of him.” So you have to try to speak in a more musical kind of way, and I haven’t read music in so long, so when Mathias starts to talk about counter-points and all kinds of things I don’t know what he’s talking about. He usually does what I have done on the demo. I’ve often told him “Okay this is the main melody, and he’s the lyric, feel free to do what you want with it.” Nine out of ten times he does exactly as I’ve done the vocal melody on the guitar. We don’t really have much communication about it anyway. Maybe the overall performance in the studio, “hold that note a little bit longer” or “put another harmony on that chorus,” but that is quite easy things.  Of course we’re not from the same musical background, so it’s a bit different  but I think it’s something that fuels the music, something that makes the band different from the rest of them.

I always something that made you guys stand out from other bands. You guys never do much touring, do you have any plans for that for this album?

No, we’re quite a strange band. We don’t promote the album and still we got the record contract, so I don’t know how we’ll manage. We told everyone from the beginning it was just going to be a studio project, but when we got the proposals for Wacken Open-Air in 2002 it was hard to say no. So we started to do a couple of shows here and there, but not on a regular basis. I wouldn’t call us a touring band, because we’re a studio band that might do a couple shows here and there. Now it’s been five years since we’ve been on stage at all, and that might be a bit too long. As far as your question, touring, no that’s not going to happen.

Do you see any even one-off shows any time in the future?

We had plans to try to book a couple festivals and a couple of plug shows this year, but I started to contact the most interesting festivals and I realized afterwards that we were just too late, a lot of them were already full booked. We decided to postpone the shows until 2015. I’ll try to talk with the festivals this fall even just so we know what we’ll have next summer, if it’s worth to start rehearsing the old songs.  I don’t remember many of them, a riff here and there, but I really have to put on the CDs and check out the songs once again. As for 2014, it’s not going to happen. Maybe record another music video, but that’s pretty much it.

It’s not the most natural thing for us to do I think, that’s pretty much up to the label to decide. I don’t decide to put out a live album, and honestly I consider Falconer to be a studio band, and doing a live album is quite foreign to me, and I don’t know how much repairing we would have to do in the studio, [Laughs] but I guess every band does it. I don’t know how much of a live album is live, but one of my favorite albums is Alive with KISS.  Live After Death by Iron Maiden, for example, is something special. We’ll see if we do it in the future, but as I said it is pretty much up to the label to decide.

Other than that, what can we expect for the future of Falconer? If you’re to be doing a music video, what song would you pick for that?

If we were a professional band, I will tell you the music video should have been out by now, but we haven’t recorded it. Hopefully in August we’ll hopefully have a music video out for probably “Halls and Chambers,” one of the best songs, I think, from the new album. It’s gonna be the same director from the two old videos [“Carnival of Disgust” & “Vid Rosornas Grav“], and it’s really, really good. Thinking that we don’t have a big video budget, I’m really proud of those two. So a music video out, and then we’ll have to think about the new album!… in a couple of years or something. First of all we’ll try to get some shows for next summer. Maybe we’ll have something special going for this winter, a special treat for the old fans, but we’ll take that later on. 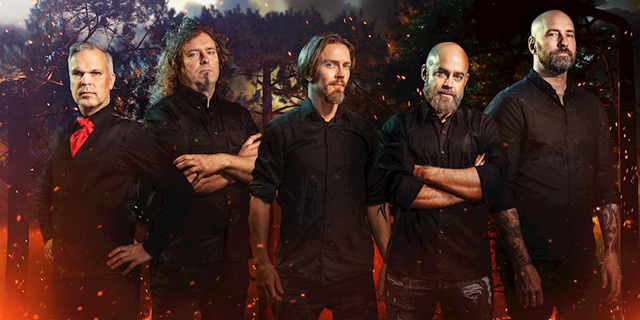