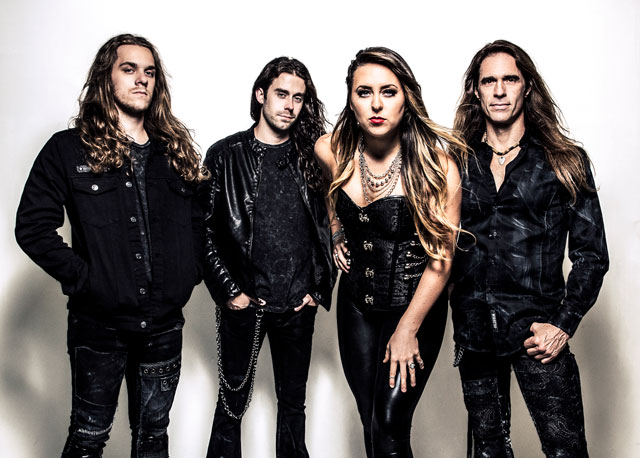 Springfield Missouri rockers, Paralandra have been touring across the United States as they’ve been supporting legendary guitarist Yngwie Malmsteen’s headlining trek. We caught up with guitarist/vocalist Casandra Carson to discuss their latest EP Ascension, their overall sound, and more.

How long did it take for you to make Ascension?

Not long, we were only in the studio for about 2 weeks!

Some fans have been comparing you to Halestorm, do you notice any comparisons?

I mean, we’re both rock bands with a female lead singer, so I understand some of the comparisons. However, in my opinion, our music has a very different sound. We tend to focus our songs a lot more on guitar riffs and soloing (and I like it that way! Lol). We’re definitely more of a classic rock meets modern rock vibe.

We like to call ourselves hard rock or melodic rock. Heavy music with catchy melodies and hooks.

Being on tour with Yngwie has been quite the ride in many aspects! I’m really glad that we’re here though because we’re winning over fans in huge numbers at every single stop, and that’s all we could ever hope for.

Have you been working on new music?

Yes, we have! We’ve actually been testing out some new songs on this tour that no one else has heard before. I think people love the idea of being a guinea pig for unrecorded material, so it’s fun for the crowd, too.

What are some of your favorite heavy bands from Missouri?

King’s X for sure! Some current locals everyone NEEDS to check out right now are TROY and The Many Colored Death.

Do you have any touring plans for later this year?

We definitely have more touring plans for the fall. No details just yet!

I’d just like to add that I’ve been listening to Yngwie Malmsteen literally my entire life, and being on this tour is completely mind blowing. It’s proof that hard work pays