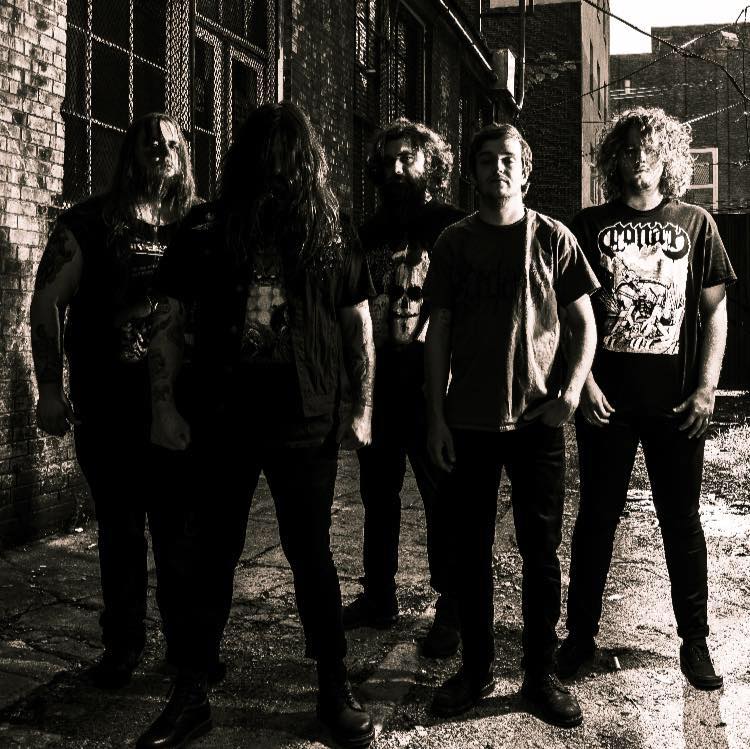 Pennsylvania death/doom metallers Outer Heaven just completed touring with Full of Hell, which was also a celebration for the arrival of their Relapse Records debut, Realms of Eternal Decay (order here). Prior to their run, we spoke to vocalist Austin Haines to discuss their new album, the band’s overall sound, future plans, and more.

For those who are unfamiliar, can you explain the overall sound of Outer Heaven?

In a nutshell, our influences range from Cannibal Corpse, to Morbid Angel, Gorguts, Demilich, those are some of our bigger influences. Some earlier Incantation stuff, we just like to play heavy music with a little bit of technicality. You know, interesting riffs, stuff like that.

How did you guys get signed with Relapse?

One of their main offices, is actually only about 30 minutes from where we live. So, going to shows and playing shows in the area, you know, a lot of their guys, their offices, either have seen us play in the past, or have reached out to us at a show, gotten to see us a little more than maybe some other bands just because we are so local to where they mainly operate. Then eventually, it just came to exchanging a couple emails. They were kind of just feeling us out to see what our brands were, if we had an album ready to go, if we were interested in putting out an album any time soon. We did have an album pretty much written at the time we started talking to them, and then from there we just hashed a few things out, signed a deal, recorded the album, and here we are.

How would you compare the writing of Realms of Eternal Decay to your previous demos?

​I attributed to a lot of the success of the new record to the fact that we did our first attempt at writing with two guitar players. Up until the album, we only ever had one guitar player. And he was mostly the main songwriter for the band. So, when it came time for the album, they could both bring riffs and ideas to the table. Bounce ideas off each other. And then it also kind of gave us an opportunity to open up our live sound a little bit. Being able to write some things that can be played with two guitar players live, that we tried to stay away from in the past just because we didn’t want to record too much on a record that we wouldn’t be able to play live. You know, stuff with leads, doubled up guitars, and stuff like that. I think having a second guitar player has made a huge difference between the older material and the new album.

It’s definitely a new experience for you guys on stage. And what are some of the lyrical themes on the album?

I write all of the lyrics in the band. So, as I’m writing I’ll bounce ideas off the guys. Send them some ideas I might have, or lyrics I’ve written, just to get opinions. Because I want to be able to make sure that everything’s up to par. And I was bouncing a couple of ideas off the guys and we basically got into a discussion on what is called “The Stoned Ape Theory”. Which, in short, it basically is a theory that state that mushrooms, and psilocybin mushrooms, and hallucinogenics played a big role in the evolution of human speech, creativity, language, stuff like that. So that basically, that discussion evolved into the concept of the album, which is sort of a tripped out, slime mold that takes over the beings on a planet. Trips them out, makes them go crazy, kill each other, cannibalize each other, and kind of decay into nothing. So basically a whole planet withers away from that.

It’s interesting that you mention that because in your video for “What Lies Beneath,” it reminds me of something similar to that. It also reminded me of the trippy film Enter the Void.

What are you planning on for the tour with Full of Hell?

​Well, I’m actually sitting on the floor right now of my living room folding up some special record release covers for the LPs for a record release show that we’re going to have on Wednesday of this week. That’s actually the first day of our tour with Full of Hell. It’s just good timing so we’re going to have some early copies of the record with special covers. There are actually 3-D, and they come with 3-D glasses, so I think that’ll be cool for anybody who picks up a copy. And then, we’ve got a couple dates locally with Full of Hell, and then we take off on Friday for some of the further dates going down into the Carolinas, Georgia, Florida, going down, shooting back upto Atlanta, and should be cool. We’ve been friends with those guys for a really, really, long time, and we never got the opportunity to tour with them, until now. So, just something we’ve all been looking forward to for a long time.

What artists do you guys plan on adding for your playlist while on the road?

There’s a band from New Jersey, they’re called Replicant. Basically a perfect brain-child of Gorguts and Demilich. We put them onto the record release show on Wednesday. Just ’cause we were all big fans of those guys. We’ve been listening to a lot of Suffocation. I’ve been listening to some Cynic, Traced in Air. I just picked up over the weekend a Bolt Thrower, Realm of Chaos, Earache Records first press, 12-inch. So I’ve been spinning that. Some Destruction. I got the new Scorched record, stuff like that. Some new stuff, some old stuff, it’s always a mix.

​Well, we are talking to a new booking agent who is working on a few things for us. We’re hoping to get out to some festivals. We’re planning on getting out to the West Coast, probably in the middle of next year. Not sure with who yet, but it’s in the works. And then Relapse wants to get us over to Europe, probably Fall of next year, so we’re working on that as well. Nothing official yet, but we have got some official offers to play some festivals over in Europe. So you know, it’s just timing and planning and all that. But, I expect that we’ll be out quite a bit in the new year. 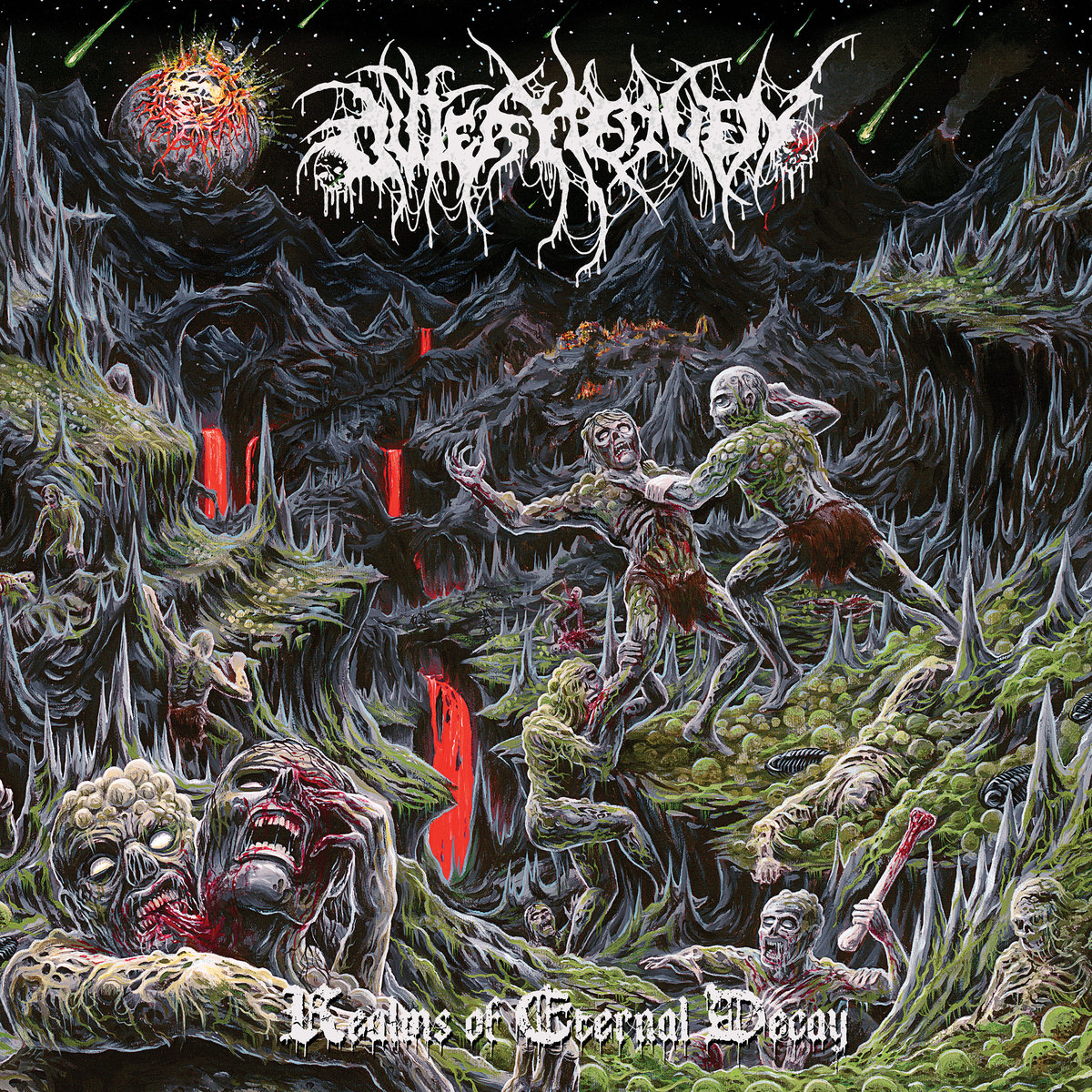