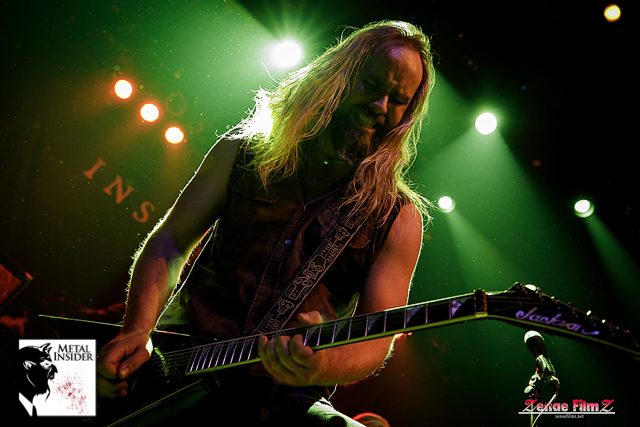 One should have a calendar for Insomnium/Omnium Gatherum guitarist Markus Vanhala as it doesn’t look like he’s been getting much time off between tours. While his commitment with both bands remain highly commendable, one could believe superheroes exist based on his hectic schedule. For example, when you watch the guitarist perform, there are no signs of exhaustion.

Between both bands, he’s performed at 70000tons of Metal at least three years in a row, embarked on a number of tours supporting 2016’s Winter’s Gate as well as Omnium Gatherum’s latest effort Grey Heavens. Back in 2015, the guitarist had double duty for the Insomnium/Omnium Gatherum North American tour. It’s safe to assume, Vanhala is either on the road or writing new tunes.

Somehow, we were lucky to speak to Markus before Insomnium’s show at Gramercy Theatre. He discussed subjects such as Winter’s Gate, his busy schedule, playing on the cruise, thoughts on Vinnie Paul, new album plans, and more.

What music have you guys been listening to on the road?

On the road? I think our all time favorite over the past few years has been Night Flight Orchestra. It’s like traveling music and you have the guys from Soilwork (Björn Strid and David Andersson). They kind of formed the band on their own and it really tells their whole story. So that’s basically what we’ve been listening a lot.

I know you finished writing for the new Omnium Gatherum album (The Burning Cold) and it looks like you’ve been touring all the time [laughter]…. How do you have so much energy being committed to both projects?

​I don’t know. It’s so weird. It takes persistence. I’ve been with Omnium Gatherum since I was fourteen and when I joined Insomnium, both bands weren’t that successful at that time, so it was not so busy. So, I thought I would easily be part of two bands but now, these two bands are touring a lot. ​It’s very busy at the moment but I don’t know how it happened. So far, so well. I did about six tours over the past six months and got an album done and [laughter], write the songs, somehow. If you wanna do something then you have to. It all happened, I don’t know how [laughter]!

Back on the road in September, right?

How was the experience playing Winter’s Gate on the cruise at 70000Tons of Metal?

It was really fun and weird and, you know that you have to do two gigs always on the cruise so of course, we decided we wanted to do Winter’s Gate outdoors, on the pool deck because it was under the Caribbean sky, in really hot weather. We were playing in the middle of the night so it was really cool, one of the best kind of experiences. ​It’s been really fun to play that song in particular because it’s something completely different than what we’ve ever done and it’s kind of different, kind of eager always to play that song.

There’s something about that song that makes you not wanna stop listening to it.

How weird! ​I don’t know about that! [laughter]. Been playing that for two months so I haven’t listened to it lately!

It doesn’t seem like you have too much free time as of late but do you have any hobbies outside of music?

I always, always answer Insomnium if someone is asking in an OG interview but Insomnium, I say OG! But trying to live a normal life at home sometimes with my dog, cat, and wife, that’s my hobby! My wife! [laughter]

What inspires you to continue writing new music?

Music itself, it’s kind of like… trying to top what you’ve done and… it’s a magical feeling when you get a new piece done. It’s one of those feelings you cannot get anywhere else so that is a big inspiration by itself and you can get inspiration from everything – with good music, movies, and usually nature. If there would be an easy recipe for writing music, I’d do it even more! [laughter]. But I don’t know it!

Did you write for OG while you were on tour with Insomnium?

​Basically, not. I need to concentrate, I need… Silence. I mainly compose at home. ​It’s really nice and relaxing at home and after the tour, you are always full of energy, wanting to start writing new music. It’s a different world to play tours and compose. It’s like three-sided. It’s playing concerts, then composing the music and then creating the stuff in the studio, it’s a three-piece process and they are really different from each other so it keeps things interesting. And all of us have the energy. If you have seen the creative process circled at how, our mind is going like… At the first you feel like nothing is coming out and then something is coming out and you feel yourself being  a genius and then on the next minute you feel everything is shit. ​Then it slowly again comes back like ‘okay, this is decent [laughter].

Is there anything you can reveal to us about Insomnium plans after the tour?

Well, just two more this year and then we are really going into the writing mode and we are aiming to have something new in the later half of nineteen, next year.

Looking forward to that!

​Then it all starts again! [laughter].

How do you feel about the overall success about Winter’s Gate?

We don’t really think about success or something like that. 2014’s Shadows of the Dying Sun was and it would have been easier to do a safe kind of album but somehow we had the urge to do this forty minute song. So then, we called the song at first like ‘commercial suicide’ [laughter] because… a forty minute single doesn’t sound like a huge product but it went really well and we’ve been really happy to see it. There is still hope in the music scene. You need to get everything for free these days and people don’t listen to music, they just give it a one minute chance on Spotify so… that’s making me really happy that people have taken this forty minute ‘commercial suicide’ this well.

The hard rock and metal world is reeling from the sudden death of Vinnie Paul, how did he mean to you?

Yeah, we just heard about it right after going off-stage. Pantera, huge influence, for me back in the day like Cowboys from Hell and Vulgar Display of Power were the first brutal metal records I have ever listened to. Of course, it’s a huge influence for us and, really one of a kind band. I think everyone remembers where you were when Dimebag was murdered. I still remember, I was at class, at school. So I think the Vinnie Paul moment will be the same. I will always remember going off stage in Toronto and hearing the news and at night, after that playing Pantera, and we had black torch with the Oceans of Slumber guys on the bus and had a Pantera night. Sad things happen.

How was your experience last time here with Epica and Lacuna Coil?

​Really nice, we played at really big places with Epica and Lacuna Coil, because they are huge bands, bigger than us and, we get to meet new fans and we could really see on this tour, there were a lot of Epica shirts so we could steal their audience pretty well. And really awesome people in both bands, really good friends from now on.

This time around, you guys are finally headlining here in the states, it’s been about three years?

Yeah. 2015. It was really weird tour. Niilo had a family emergency and we had to find a finn in guy with four days notice. It wasn’t possible to cancel the tour because it was already running so it would end up in a really big mess. But Mike Bear did really well. People seemed to understand. We had this situation and it was like the first in years of headlining a tour in the states, so it was weird.

And you still powered through back then, shows your dedication. Now, between then and now, do have more difficulty getting into the US?

OG, last time there was some delaying with the visas but we managed it so, not exactly. I’m just at the moment applying visas for OG, for the next tour so we’re hoping they will be…

Yes.That would be a huge, huge disappointment. [laughter]. It’s another big tour us metal-heads out here are looking forward to see.

Do you have anything you want to add and say to your fans?

Keep on listening to metal and be happy, be safe. Thanks for taking Winter’s Gate. It’s great that lot’s of people love the record because, we did really big things for that record and that’s a personal album for many of us. And see you on the road and take out Night Flight Orchestra because it’s cool! 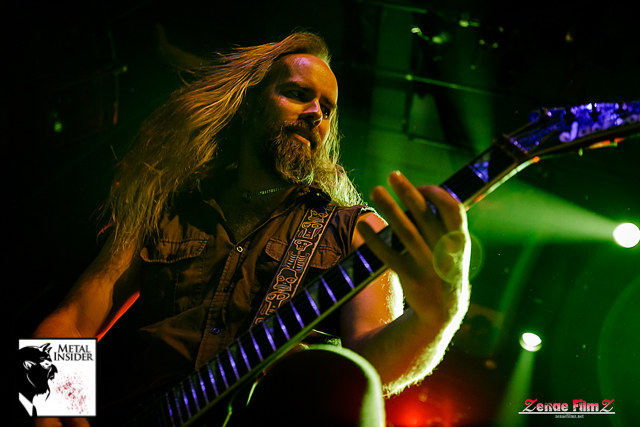