Austrian party thrashers Insanity Alert started off the new year by releasing their new album 666-Pack via Season of Mist (order here). The band has been growing and have their first tour in Asia on the horizon. Insanity Alert’s frontman Heavy Kevy took the time to talk with us about the group’s latest effort and what lays ahead for the band in 2019.

Insanity Alert’s latest album ‘666 Pack’ was released in January, what kind of feedback have you received?

So far so good! Lots of positive reviews all over the world, and more important, the thrashers seem to dig our new baby as well. People sing along at shows, tag us on all the social media and spray paint our song titles on walls.

How would you compare this record to the band’s other albums?

It’s definitively harder and faster. I think we show progression in all areas. The guys have become even better musicians, the production is through the roof and the levels of anger, frustration, party and weirdness have reached new heights.

For those who are just getting into the new album what songs would you recommend to start off with?

I’d suggest just listening to the record from the start, it only takes half an hour hahaha. But if you don’t feel like it, just listen to the first three songs, for in those three tracks we’ll show you all there is to know about Insanity Alert.

How was it having the band form and take off in Austria?

I love it here, but I think there are better places to be from as a band. Our region is full with tourists, both summer and winter, but the music scene pretty much evolves around schlager and apres-ski music. And Austria is also not the first country that comes to mind when thrash, metal, punk or hardcore are mentioned. But again, living here is great, and we do what we can to get that crossover thrash party started every once in awhile.

For sometime now there has been the new wave of thrash metal, are they’re any bands that you follow from this era?

Oh yes! When we started in 2011, bands like Municipal Waste, Gama Bomb, Toxic Holocaust and Evile were really kicking it hard, and we thank them all for it. Nowadays all those bands are still thrashin’ hard and with killer ‘newer’ bands like Iron Reagan, Crisix, Toxic Shock, Space Chaser and many many more, the scene is alive and ass-destroyin!

You’ve taken part in some big tours with Suicidal Tendencies as well as the Persistence tour with Hatebreed, is there any tour or show in particular that stands out to you?

I love every show, big or small, but the Persistence Tour was really an amazing experience. Massive halls, thousands of people every night. Getting a glimpse of how bands like Madball and Hatebreed do it is really cool too. And I slept in a bunk, in a bus, in a train, in a tunnel, under the ocean!

Play a lot, party hard and drink beer / smoke weed! Promote the new record as good as we can here in Europe, playing festivals this summer like Hellfest, Obscene Extreme, Sylak Open Air, Jera On Air, Antwerp Metal Fest, Dokk’em Open AIr and mucho more. We also are working on our first Asia tour, planned for October, and of course we would love to come over to the USA and drink light-beer.

What are your expectations on your first tour in Asia that’s in the works?

Well, I’ve been to Asia before with my other band and just on vacation, and it has been mind-blowing every time. I hope the people over there will like what we do, and that they will go mental with us. I also wanna drink and eat much weird shit and relax in the sun.

Ideally who is the one band you hope to tour with down the road?

Wow, so many! But I’m just gonna list a few: Nuclear Assault, Goatwhore, Crisix and Metallica 🙂

When can fans expect to see Insanity Alert tour the states?

Really no idea! As soon as we get a cool offer, we’re down!

For anyone traveling to your neck of the woods, what are some of your favorite beers you would recommend? 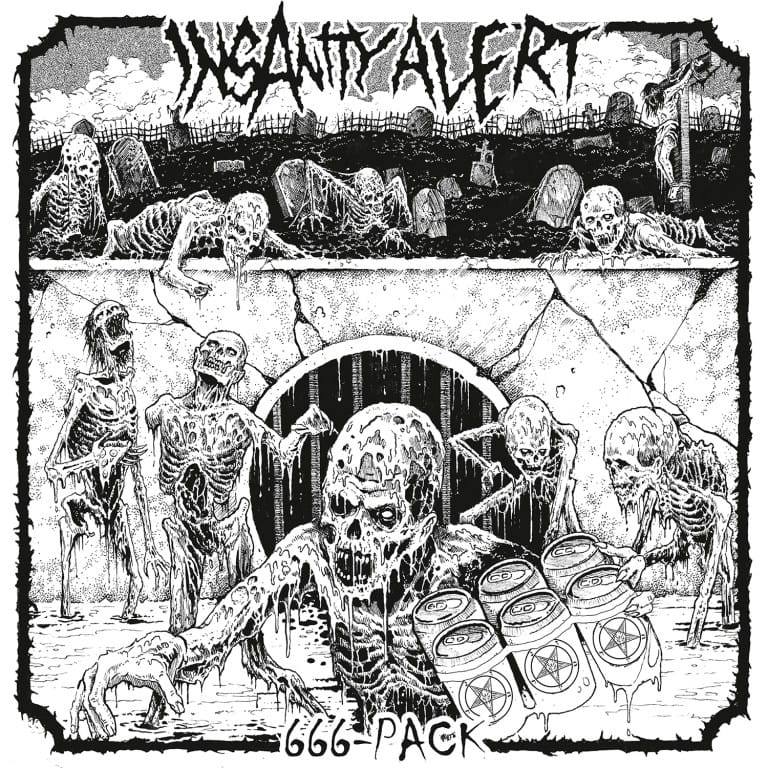