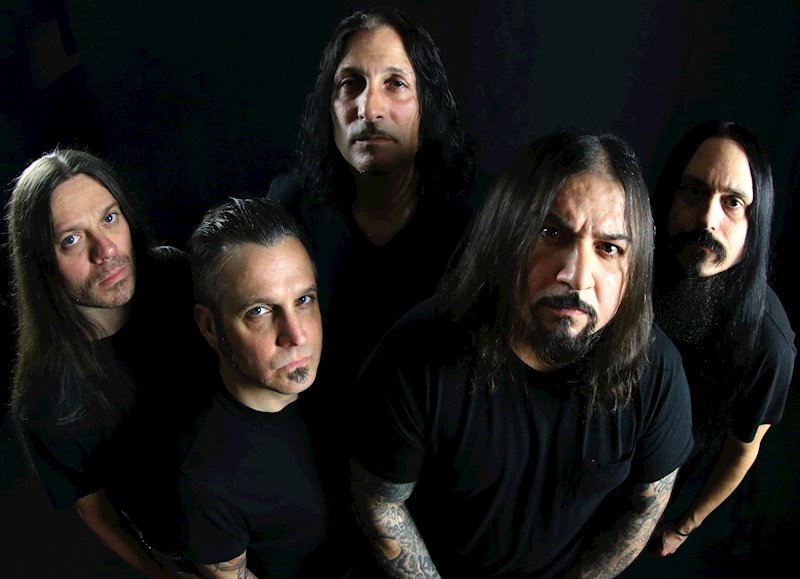 On January 18th, A Pale Horse Named Death released their first album in nearly six years with When the World Becomes Undone (order here). It is the overall third record from the group featuring former Life of Agony and Type O Negative members. We spoke to the group’s mastermind Sal Abruscato a few days prior to the group’s record release show in New York City discussing the new album, his departure with Life of Agony, and more.

When the World Becomes Undone is a compelling record from start to finish. One can describe it as Type O Negative meets Alice In Chains. With that being said, how long ago did you start writing it?

The sketches of the album’s concept began as far back as 2014. I had the title since then and kept it under wraps, and never told anyone about it. It was brewing since but life took over as well as a few changes. Things were moving in different directions and quite a bit of time had passed. There were also member changes, and we finally had time to work on it last year and delivered the record.

Do you have any other reasons for the time gap?

There was a couple of reasons. One was personal. For one, I and my wife, our second daughter was born, disabled. She was blind and had to go right into surgery. I had to deal with a heavy period in my family’s life. At the same time, Life of Agony wanted to have a reunion and get back together. I agreed, and then it turned into one week of shows, to a two-week tour. Then it went from a two-week tour to another tour and then it turned into yet another tour. After the touring, the band wanted to write another record, we received an offer and yadda yadda. I got involved in writing the music for that record and it delayed again. Life of Agony took a lot of my time as well as dealing with my family to the point that everything else had to wait and take a break. I wouldn’t have been able to do it right if I was busy with so much other stuff going on.

Then finally I realized, I needed to get back to this because I needed to finish off some things personally and get it out there, musically. I’m thrilled that it had to wait because it seems like the world couldn’t be in a better receptive way for this record. It seems like there’s nothing like this anymore in music as far as the genre. There’s also the climate of the planet and the changes that’s happening in the world including the divide in the country. I guess, you can say the album touch people in different ways. We’re in a dark and yet technologically advanced society and we’re still not progressing in the right way.

The record did arrive at the right time. Musically, the album is a mix between 90s grunge that has a modern twist. Can you explain some of its lyrical themes?

Sure. It’s a personal record, but I don’t try to be too specific where it isolates people. I try to leave it open for interpretation. Of course, the title track, “When the World Becomes Undone,” is a track that explains what it is. It reflects a lot of what the sad case that’s going on, humanitarian-wise, and what’s going on in the world. I referred to children a couple of times, which is in essence, shows the future. I also touched on my daughter a little bit.

Every song that I do has a mix of emotions, and you take the song like “Love the Ones We Hate,” that’s kind of a reflection to the bitter departure I ended up having with Life of Agony. Their not worth my time and I should just let it be and let it rest and subside the anger. “Vultures” is one that’s about people who enjoy watching you suffer and only coming around when something’s going well, just to get something out of you. But for some reason, they seem to be the same people when something wrong goes on in your life. They mysteriously show up in your life all of a sudden because they are reveling in your misery. It goes on and on. “Fell in My Hole,” is a reflection on myself because I am a manic depressant. I’ve been diagnosed, and I get full of these sweats and need to snap out of it sometimes. It’s also about getting caught up with all of these emotions. It goes on and on. A lot of tracks on the record, I can talk to you for the whole half hour about every song. 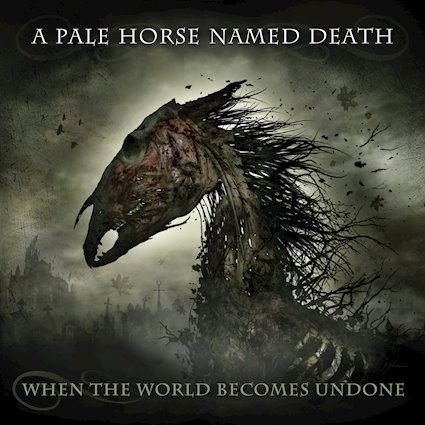 It’s reality. Too many people are going through everything that you described, they’re battling their own personal turmoils, dealing with fake people, loss of friendships, etc.

Exactly. It’s the stuff that everyone deals with in life. I’m not specifically saying anything to anyone, and I think these influences come from places like that. Some are subject matters of the apocalyptic side like the end of days and the apocalyptic side of the end of humanity. “Dreams of the End” is more on the subject of suicide. I touch a lot of taboo subjects on this album.

They have to be discussed too. A lot of people are struggling with mental illness, and there’s been many suicides as of late. It’s good to speak up for people to know that they aren’t alone.

Right. Exactly and if one song reaches someone in a way that makes them feel that they’ve been there too, then maybe it will change their minds and help them work something out than handle things in detrimental and violent ways.

How do you balance your time between your personal life and creating the album?

It’s a different ballgame. When I was in my 20s or 30s, I would devote 100% of my entire time, 8-10 hours a day working on music. Now for me, I have to pick and choose that open window. And that’s what was going on with the album, it took a while to record because I have work schedules out with family and other things going on in my life. It takes longer. The older you get and the more responsibilities you have, especially with children, I have three daughters now, and my younger just turned one so we’re still going through that part too and my second daughter she turns 6, and she’s disabled, and my oldest is 8, and she’s getting involved in other things and growing up too fast. Everything takes time, and I have to make time and take time to take one to the movies or just watch one of the kids while my wife goes out to do something else. You have to tag team it all of the time. Three’s an odd number. I live in the country, and I live in upstate new york. I have to deal with a lot of ground maintenance and work on things myself sometimes I feel like I’m a farmer out here. I’m on a track, I live a very hands-on life. It’s not a bubble. I’m not a rockstar, in any way. I love doing all kinds of stuff. I work on my car, get greasy and dirty. I enjoy being hands-on, I don’t like being a primadonna in any way.

That seems to be becoming an endangered species now. I’m older; I’m not a millennial in any way, I’m a 70s kid, I grew up in the 70s, a teenager in the 80s, we’re a dying breed. So, yeah. Real person.

Speaking of real people, you recruited. Joe Taylor, who worked with Doro and Lita Ford, how did you get him to join?

We wanted to get back to work, and Matt Brown didn’t want to be involved anymore, he was pursuing other things in life. Eddie Heedles said well, I know Joe Taylor; he’s back. He was in Germany for a long time and came to the United States and was doing a few shows with Cycle of Pain. Eddie eventually gave him some songs to learn. He showed up, and pretty much nailed it. Taylor was pretty much doing all of the parts without any issue. He’s an amazing guitarist. I feel like I have two awesome guitarists in this band. I’m very proud of it, and I’m proud of the whole line up. We all love each other and have a lot of fun. It’s nothing but jokes going back and forth. Everyone’s a comedian in the band, and it’s really funny.

Last year, there was a back and forth between you and Mina via social media. With that being said, do you think social media has made it easier to take things out of context as well as believing in “fake news?”

It was an unprovoked attack on me. I didn’t do anything to her, didn’t say anything. It’s because some fan poked at her saying, “oh Sal, said you voted for Trump.” I didn’t say that. Anyone can write anything really. I was blown away because I didn’t expect that at all.

There’s nowhere, anywhere, anywhere on paper, on record of me attacking anybody. It’s this sensitive climate that we live in where everyone makes a big deal about everything that anyone says, and no one can speak the truth or speak their feelings.

My generation wasn’t born in this garbage. Now you have 18-year-olds who were born in the early, and they think they know more about life and want to try to tell us older folks on how to think. I think the problem is with society is everyone gets offended right away. It’s called freedom of speech and if you don’t like it, you can keep scrolling and walk away. It’s very simple. But we have hordes of people who are trying to make everyone think the same, and it’s not cool. I feel like the song written by Paul McCartney, ‘Let it Be.’ You know, Let it be.

It’s true. Social media can clearly make people take things out of context as well as misinterpret what they hear and take offense to it. Can you explain why you left Life of Agony?

I left because my daughter had 20 procedures that year and I was diagnosed with a medical condition that was leading to cancer, and I was also diagnosed with manic depression. So, 2017 was a rough year for me. I left on tour two times while my daughter was in surgery in the hospital. I didn’t care about the transitional stuff what I cared about is that people didn’t understand how I was inside all the time. All though they may say they cared but they didn’t really care and that I wasn’t cool enough for them anymore because I was worried about my family and my daughter getting surgery while I’m touring in Europe. And instead of canceling and not doing the tour, I did it because I didn’t want them to lose money. They were un-understanding of my situation, and I felt I had nothing in common with them at all.

You moved on; you have your project, there’s a lot of steam going on and a lot written for the record. What plans do you have for this year?

Are you looking forward to your record release this Friday?

We put our heart on our sleeves and if it helps anyone in any way for those who are coming out of a rut, putting a hole out of their head, coming out of sadness or depression. There’s always a light at the end of the tunnel. We appreciate the fans all of these years waiting for the album and appreciate the reception it’s getting. We thank everyone.