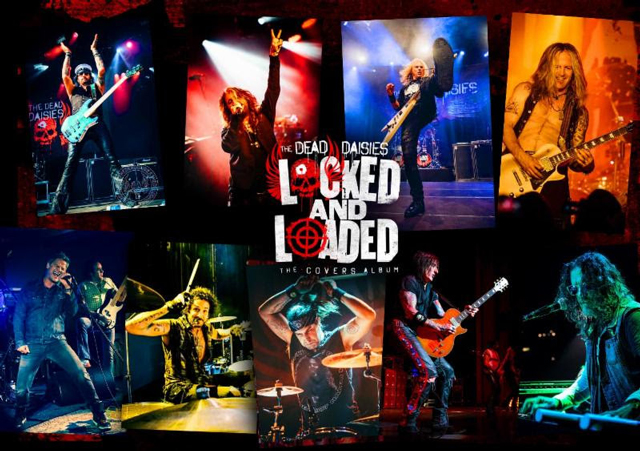 The Dead Daisies have embarked on their next chapter as Glenn Hughes (ex-Deep Purple, ex-Black Sabbath) replaced John Corabi and Marco Mendoza. Since the initial announcement, the supergroup has unveiled the new song “Righteous Days,” to introduce their new sound. We caught up with guitarist Doug Aldrich to discuss their overall change, the future of The Dead Daisies, and the band’s open-door policy.

I was surprised to hear about the lineup change. Can you discuss how this happened?

The thing with The Dead Daisies is unique. It’s always been looked at as a collective, especially from a management point of view. Sometimes schedules wouldn’t work out, and somebody would come in and somebody would go. But the band was pretty stable for a while, once they had Richard Fortus, Dizzy Reed, John Corabi, Marco Mendoza and Brian Tichy. That was pretty stable for a couple of years or so. Then the Guns N’ Roses reunion happened, and Richard recommended that they talk to me and I took over. And that line up was even more stable, with me, John, Marco and everybody.

We’ve been busting our ass for three and a half years, since I got with the guys. Made a couple of studio records, and we definitely felt like we were upping the game every time. And then we got, I think to the point where we were working so much, we decided we needed to take a break. Speaking for myself, I definitely had been enjoying it. I think during that time, John especially wanted to take a step back and look at what his priorities were and what his options were, in terms of knowing that he’s part of the Daisies sound, that he can come back if he wants to. But at the moment I think he wants to focus on his solo career. He’s got a solo band, he does acoustic shows for thousands of people around the world. Just him and his guitar, and he has fun doing it. I don’t blame him. At the same time, of course I’m going to be bummed not working with him, but I’m extremely excited about the addition of Glenn Hughes, it’s major.

How did you recruit Glenn?

I know it’s a surprise and there’s going to be fans that don’t get it right away. And they think it’s too drastic. Changing lead singers, is almost like changing the band because that’s the frontman. That’s the first thing you hear is the vocalist. I think it came totalk fruition. They were ing about options and somewhere along the line they decided to talk to Glenn. And when I heard about it, they had already spoken to him and he was already considering the opportunity. The band was as well. I immediately thought, you know, that’s a radical change. But it’s definitely an exciting change. I thought it was something radical enough to where it could actually work.

I think it’s something like this, when you’ve got a guy that’s as popular as John Corabi, it’s difficult to trying to replace him. I think it’s a good move to go with, in a different direction. And that’s definitely a different direction with Glenn. Speaking positive about Glenn is very easy because he’s a legend. He’s the voice of rock. He’s got an amazing voice, very different than John. He’s a killer bass player too. Equally, same as Marco. Marco, he’s a monster. I think it’s going to be pretty cool. We were really happy with the way our songwriting sessions went. We don’t have a full record written yet, but we have a bunch of ideas and recorded four of them.

One of them is “Righteous Days,” which you’ve probably heard. There are three others that kick ass. We felt “Righteous Days” is the best first teaser. It’ll be available for about a week or so. Then it’s probably going to go away and come back on the album. We’ve made a different version, a re-recorded version, a remix, something different. We thought it was a good way to make an announcement to show, let the music do the talking. This is what it is.

How has the creative process change with the different line up?

When I joined the band that was one of the coolest things that we sat down together with acoustic guitars and bashed stuff out. All of us with guitars. The first day I sat down with those guys, it was six of us with guitars. The producer being one of them and Marti Frederiksen. We were all hacking through stuff and had ideas. And finally he got the idea and all right, let’s break it up. Two guys go together, another two guys go together. Everybody write one song or two songs, whatever you can for the rest of the day. And then we’ll listen to everything tomorrow and we’ll go through it. And so, that was really cool.

Brian Tichy and I wrote a song, two songs, I can’t remember. But we all wrote a bunch of songs. And then the next morning we listened to them. We tore them down and rebuilt the best ones. And it was really a band process. I thought that was unique to that group of people. I started to realize that’s a great way to write. To be in the same room and do it together. That’s what we did with Glenn, just getting our feet wet with him. It was the first session we’ve played together. We’ve written together and now we’ve recorded together a little bit. But most important job is probably yet to come.

What’s the next chapter for Dead Daisies?

The door is always open for people to come and go and you never know. At some point, who knows what will happen. Maybe there’s a tour that comes up and Glenn’s busy and The Dead Daisies want to do it. I’m not saying that’s going to happen, but it’s an open door in a certain sense. If I’m not available, say, somebody in my family is sick or something and I can’t be there. Then if Richard Fortus is available, he would come and do it. Basically right now we are focusing on Glenn and getting the four of us, Glenn, David and Deen and I to really gel. Then we’ll get in the studio and record. And next year we’ll have a record out. We’re definitely excited about where it started with this line up and then we’re going to keep moving forward.

Dead Daisies have had quite a few collaborations. Are there any musicians that you would like to work with in the future?

The Dead Daisies, I mean, it’s always hard to make a change, so I would say that I’m happy with this situation. But yeah, down the road, I mean there’s always people that you would love to collaborate with. It’s a dream to think about, getting a chance to sit down and jam with one of your heroes. I just went and saw the Stones play. They blew me away again. And the two guitar players together sounded amazing and, finding that chemistry with somebody else the way that those guys have is really cool.

As far as people that I want to work with. I haven’t really thought about it that much really. But I guess maybe doing something with Joe Bonamassa would be amazing. I’d love John Sykes. I’ve had the fortune to play with a lot of great drummers and bass players. That would be insane to work with David Lee. The Dead Daisies have great chemistry with David Lowy. I’m working with Deen Castronova who’s amazing, and now Glenn. So I’m going to roll with that for a little bit.

Are there any albums that you’ve worked on that you found was the most challenging for you as an artist?

The last Dead Daisies’ album was a little challenging for me because the production was where we wanted to change the sound of the band. The producer was heading in a little bit of a different direction. I found myself stuck in the middle trying to maintain what the band wanted to do but to also keep the producer happy. It was difficult but the record turned out great. There was definitely days when it was like, oh man, how am I going to navigate this? Just like any job, you know, those things happen.

There was a record I did that a lot of people really loved. It was with a band called Hurricane a long time ago, back in 1990. It was a record called Slave To The Thrill. It did really well. It was my first real tour, touring the States, and we had a blast. But making the album was difficult for me because I was a one trick pony. I do one thing pretty well. I love to dabble now because I’ve learned from people like Coverdale and different people that it’s really good to experiment. And so that’s how Jimmy Hendrix got his sound in experimenting.

But at that time I was still a really young kid in my mind and I was boneheaded and I wanted it to be a certain way. The producer, who was in charge, was again trying to steer me in another way. He kept wanting me to go in this direction. I’d go in another direction and he’d reel me back. Finally, we found a meeting point in the middle, it turned out to be the record. It was fine and it turned out great. When I hear those songs now, it reminds me of that time and it’s hard to listen to it sometimes. But other than that, recording is usually easy and a blast. You get in there, experiment and see what works best for each song.

I would say, it’s like, any band changing members is difficult because people hold it really precious. They hold the band precious. The band that they have seen live a bunch of times. They don’t want it to change. They want it to stay the same. And I’m the same way. I’m not easy with change, but that’s part of life. If you don’t like it, you don’t have to stick around. But of course, I hope people will. Everything was amicable, it’s not like we were in a fight, you know, or anything like that. There’s nothing like that.

I am a guitar player and I love playing guitar. I wake up every day feeling blessed to do what I do. And fortunately,I’ve worked with Glenn so it’s not as foreign to me as it could’ve been. I’ve been a fan and friend. I know change is hard, but for fans, we might lose some people, but we’re going to gain some people as well. I think it comes down to, what The Dead Daisies as a team want, they want the music to do the talking and the music to be the real focus.

I would say to the fans, thank you so much for all you’ve done to support me inside and outside of The Dead Daisies. And then for The Dead Daisies fans, we really appreciate all your support over these years since I’ve been there anyway. And look forward to seeing you guys on the road. And to all the new fans that we have now that Glenn’s in the band, you know, I’m really excited to be back on stage with Glenn.