Visions of Atlantis continue to evolve as the group have been through a series of significant lineup changes. However, nothing gets in their way to creating new music. Their latest effort, Wanderers, which was released on August 30th via Napalm Records (order here), marks another change to the symphonic metal outfit. Last year, the group parted ways with vocalist Siegfried Samer and have recruited Michele Guaitoli (Temperance) as his replacement. We recently spoke to singer Clémentine Delauney to discuss their new album, the next chapter of Visions of Atlantis, and their most recent lineup change.

Wanderers feels like a continuation with the next chapter of Visions of Atlantis that started with 2018’s The Deep & The Dark. With that being said, how did everything fall into place after the significant lineup changes, which started after 2013’s Ethera?

Our line-up is stable since early 2018 when we turned our live bass and guitar players into official permanent members, after the founding members who were brought back in the back had to leave due to lack of time. We had another significant change last year when Siegi (Siegfried Samer) decided to leave the band but the arrival of Michele Guaitoli made us feel complete again. Now we really have the feeling that this is the line-up that will sail the seven seas for a very long time. Our bond is strong, not only are we good bandmates but we are also very close friends. VOA feels like a second family for all of us!

How has the overall creative process changed having a new lineup?

For the last two releases we’ve worked with a producer, Frank Pitters from Silverline music. We work as a team to create the song structure and ambience and then I polish or write the complete vocal lines. Michele wrote two songs entirely for this new album, and I wrote one, the title track.

Can you talk more about adding Michele Guaitoli?

I was nervous thinking of having to welcome a new singer. Everything went so smoothly with Siegi I thought it would have been hard to find someone who would be talented, kind, professional and who would live not too far from Vienna. But when we got in touch with Michele, and had him on tour for a try for the first time, he adapted so fast to us that it quickly felt as if he had been in the band for years! He’s a very positive and open minded person, serious, dedicated but also fun and warm, he brought a refreshing energy into the band. It’s amazing to have him on board.

How would you compare Wanderers to 2018’s The Deep and the Dark?

It’s the continuity and yet the challenge was to go further and I think we managed to do so. It’s more epic when it has to be, it’s even more personal on many levels. We want to keep bringing in different influences, using the diversity of our singing, pushing the limits of the definition of what symphonic metal is. We’ve improved the production, recorded the drums in a better room, we are pushing ourselves with every release, improving all aspects step by step!

Can you talk more about the emotional video for “Nothing Lasts Forever?”

We want this video to perfectly convey the song’s meaning. I wrote the main concept which was polished by the video company CS Productions. The locations they found were so beautiful and the actors did an amazing job. It was a fantastic experience, it felt like shooting a movie and I love how much they went into detail to create this warm yet melancholic atmosphere which best fits the message of the song.

Are there any particular songs on the new album that was more challenging for you as an artist?

Some songs were more challenging vocally, making me push my own limits and I loved it! Then for some songs I had to put myself in a special mindset in order to be able to deliver the most genuine interpretation. I wanted to sing in the purest way, letting emotions out instead of focusing on technique. And this is actually the hardest part as an artist. To use technique with instinct and not with the brain in order to stay true, pure.

Do you have plans for a North American tour?

Not yet but we are working on it!

How would you define the next chapter of Visions of Atlantis?

We need to continue this journey, to go on with this new sound and approach to lyrics. We will keep pushing ourselves and setting up new challenges so that each release seems to top the previous one in terms of songwriting, production, and emotion.

Anything else you want to say or add about the album?

With this record we want to tell people that it is ok to feel lost, to feel incomplete, to feel that you haven’t found yourself, what you want to do in your life, what makes you happy. We want people to start this introspective journey to find out their own truth and this requires to get lost, to step out of your comfort zone, to go through darker periods of time. If you listen and follow your heart all will fall into place and you’ll find your way to happiness. 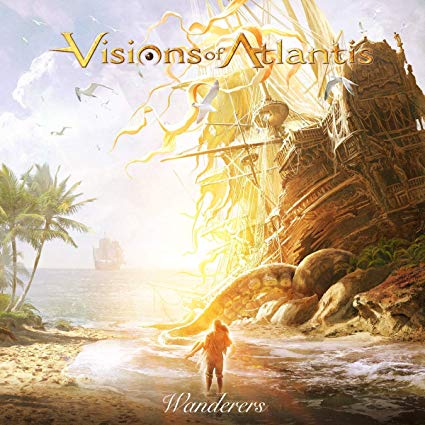