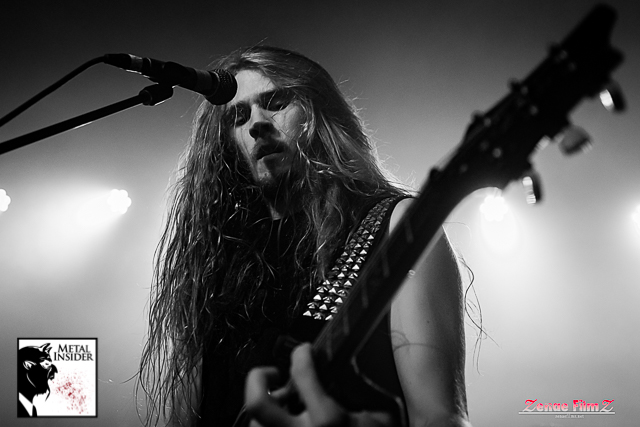 St. Louis thrash metallers, Black Fast just released their new album Spectre of Ruin via eOne (order here). The group has come along the way both technical and creative as they continue to bring a killer performance whether it’s live or through a studio recording. The group recently stopped at Brooklyn’s Saint Vitus (16th), and we were lucky to chat with guitarist/vocalist Aaron Akin to discuss the new album, Slayer, the St. Louis scene, and more.

How would you say you guys evolved since your first album (Starving Out The Light)?

Oh, boy, since our first record. What’s the corniest thing I can say? We’ve matured as songwriters. I don’t know. I still like the first record. You can hear for yourself. Though it’s just a little different. I think I’ve gotten better, lyrically and vocally. I didn’t know what the fuck I was doing. I still don’t know. I think the songs allow for more, and they allow Trevor to really shine and be creative with guitar solos and they’re just structured. They make a little bit more sense and the new songs are super fun to play. They’re really fun to play live. I think that the general, it’s just kind of all more to the point, I guess. As far as the arrangements go, the lyrics, the way that we structured things on the last record and especially this one has really allowed Trevor to kind of let her rip.

Awesome. And, speaking of lyrics, can you explain the lyrical concepts of the new album (Spectre of Ruin)?

Well, that would get rid of all the fun, wouldn’t it? There’s a lot to unpack there. I don’t know what the hell it’s about. I mean, I do and I don’t. I know that I was in a certain space. I went there with the title in my head when we went to record the record and I wrote all the lyrics while I was there. So that’s pretty much what I was doing the whole time. And I would just have listened to the songs on repeat, have images and ideas in my head about what I wanted to write about.

But, I had the title, ‘Spectre of Ruin.’ I was just like, I think I write an album to that. I think I can pull together a lot of things about prophecies, different cultures throughout history who have had seers and augers and various different cultures. And certain interpretations of bad things to come. And the way different cultures interpret that. I felt like I could write about some grand, unifying supernatural entity. I’m into anything absurd and weird fiction, and, obviously horror movies and all that kind of stuff. So I wrote it from the inside out with the title in mind.

I was gonna say what inspires you to write new music and now that you said, horror films...

Yeah, but I’m not necessarily… I haven’t seen the majority of them, if I were to talk to somebody who was a truly into horror films, I probably couldn’t have that great of a conversation, but,  yeah, I’m into, the weird and the strange, we’re a heavy metal band so I can really get into it.

I can only imagine.

What music have you guys been listening to while on the road?

Oh, last night also on the drive was Tupac and Wu-Tang, I think, but now it’s Phil Collins.

For fun, have you ever considered playing or filming outside the Earth Cam, the live webcam in St. Louis by the gateway arch?

There is, there is a webcam. If you look up the Earth Cam.

By the Gateway Arch.

Are there Earth Cams in different places like all over the world? Is that why it’s called the

I have no idea. I thought maybe you guys about filming there.

There is a webcam right there that’s, I believe a 24 hr surveillance, you can go the site right now. Look up Earthcam St. Louis, Gateway Arch.

I went to the Arch once when I was like, in third grade. So that’s about. I went there, like one time. I guess I’ll at least have to get online and look at it and check it out. I haven’t heard of it.

How’s the metal scene out there in St. Louis?

It’s great. It’s small. I don’t know what it is in proportion to other cities. I might be kind of ignorant to that, but there’s, like, five or six bands that I legitimately like to go see as much as, touring bands that come to town because their just that good. There’s a band called the Gorge who has, a new record that’s in the can that they’re gonna put out sometime. They’re great friends of ours. They’re one of my favorites to see. There’s a Doom band called Fister that’s always putting out killer music, whether they’re doing whole records or splits. They’re touring a lot. It seems like they’re in Europe all the time. The Lion’s Daughter, they’re on Season of Mist, they have a record coming soon (pre-order Lion’s Daughter Future Cult here). You should definitely fucking buy that because what I’ve heard, it’s different for them in a really cool way. They’re always experimenting. They’re a great band. What else? There’s Hell Night, Slow Damage, Path of Might, there are all sorts of bands that I see as much as any touring band that I look for.

Who do you think the next Slayer will be?

No, there won’t be. What do you mean the next Slayer? I’ll tell you what, I don’t know, but I hope that there’s a band that do what Slayer did to me when I was a kid, which is, scare the shit out of me. I was terrified of Slayer when I saw a VHS tape in ’93. I was probably, six years old, and I was into like Van Halen, Ozzy, and Black Sabbath, and then I heard ‘Master of Puppets’ (Metallica) and I was like, oh, yeah, that’s cool. And then I think I had an older cousin who was like check this Slayer concert. And I was like, Oh my God. Are these guys actually evil, are the people in the crowd really gonna kill each other? You’re a little kid so that left an impression. And then, obviously, it does something to your psyche where, that is in there, and I love heavy metal for it because it’s not like anything else. I don’t know that there will be, but I hope that they’re a band that does what Slayer did for me.

What are your hobbies outside of music?

Sitting around and playing acoustic guitar on the porch, listening to old country and folk, firing up the grill. I fish a lot. I’m a Pretty boring person (laughs) in general.

The simple life can be a blissful thing.

Which musician would you love to collaborate with one day?

We’ve talked about doing something, with my buddy Rick from the Lion’s Daughter for a little bit. I don’t know what that would be, but I think that would be cool to get some fellow St. Louis guys together and do something. So Rick, if you’re listening, text me. Let’s do it.

My last question is, once the tour is over, what future plans do you guys have that you can reveal to us?

To put all of the life plans on hold for probably the next two years because we’re gonna be touring a lot, I’m sure. And we really want to get over to Europe. We haven’t been over there yet. Get ahold of your local promoters if you’re over there. We would very much like to leave this continent and go play our dumb songs that I wrote with my stupid friends for people, places elsewhere.

Thank you very much.