On July 22nd, Boston thrash/death metal mainstays Revocation will release their sixth full-length album, Great Is Our Sin. The record is their second on Metal Blade, following an independent release, a trio of albums on Relapse and an EP for Scion/AV. With the variance in labels over the past eight years and with the band’s gradual ascendance from talented local up and comers to standard bearers of thrash metal in 2016, when we got the opportunity to catch up with singer/guitarist David Davidson, we had him go over the band’s catalog. Over coffee at New York’s Gregory Coffee, we went over the Revocation’s discography album by album and also got to hear what David brings on the road as his survival kit.

We had all this material for quite a long time so we wanted to go out there and just start the recruiting process. We hired Pete Rutcho to record it. We recorded it at Ken Susi’s studio at Western Massachusetts. We did all the artwork ourselves, solicited for crowds ourselves. It paid off in the end because I was handing out some different demos of the CD before we had the artwork and it found its way into the office of Gordon Conrad of Relapse Records, and the rest is sort of history. He came out to see us a few times, and that was the record that got us signed.

Did you have a dream label?

Relapse was certainly one of our dream labels to work with, there are so many great bands on there. I think the three main ones for metal, Metal Blade, Relapse, Nuclear Blast– each one has a great roster and bands and a unique approach to how they market their bands. We were very happy to get signed with Relapse to start off our career

How much do you think the New England metalcore scene led to your development as a band?

I think for a lot of people, they associate metalcore coming from Boston but a lot of that stuff was coming from West Massachusetts, so the Boston metal scene, I actually found to be quite diverse. We were playing with a lot of death metal bands, a few black metal bands that were playing, some thrash  bands. There was a band called Random Acts of Violence that I really looked up to when I was younger in the scene. They were playing this technical thrash style. There was a good scene in Boston for different bands but a lot of stuff obviously got overshadowed because people tend to think of metalcore being the main export that came from Boston, when really it was coming from Western Mass in location.

The scene definitely shaped our sound, we played basement shows with punk rock and hardcore bands and then we would do bar shows with death metal bands. It was a lot of cross-pollination between the two scenes. Our live show was really inspired by the boisterousness of the punk-core shows — being crammed in sweaty basements and people are crowd surfing with beer flying everywhere. The technical aspect of metal — the band I mentioned before, Random Acts of Violence and also other bands, Goritory. They’re a death metal band that came from Boston area, and are super technical death metal. There’s a lot of gems that came from the Boston scene but they obviously didn’t get as much press as the bigger metalcore bands.

You weren’t a death metal band when Revocation started, were you?

Pre-Revocation, we were thrash metal band kind of vibe, old school, but we developed our sound over time. I think we just got better at playing our instruments. So with that added skill we just started writing better songs and we could craft the sound and execute the sound closer to what was in our heads.

That was our first record on Relapse, so we sort of had something to prove I think since it was our first record on a bigger metal label. We didn’t have to self-finance it so we weren’t spending our own money to record it. It wasn’t like we had a huge budget or anything like that, but it was a fun process and I remember being really excited. I remember wanting to make a splash in the worldwide metal scene, since Relapse has distribution all around the world. We were really excited and stoked about the material and that’s our sophomore record.

Can you think of a highlight of the whole cycle of the record?

Going to Japan, probably. It’s usually rare for bands to go over and tour pretty early on in Asia so the fact that we got a tour offer to go over there to play with Behemoth and Job For a Cowboy, who, at the time were at the  peak of their popularity, it was quite a fun tour and experience.

Had you been out of the country on tour before?

We had done Europe prior to that, so that was a really eye-opening experience and a lot of fun. But that was the first time we were over in Asia, and touring Japan was quite a trip.

That was your last record as a trio right? Did you know that at some point in time you would want another guitar player?

Yeah, actually Dan came in on the Existence is Futile tour cycle, even though he wasn’t an official member yet. He had been out with us, and we just had him go through the trial period where we take him on the road and see what he’s like touring but we knew pretty early on after touring with him for a little bit that we wanted him to be an official member. Which brings us to the Chaos of Forms era.

So you’re already on Relapse, you already put a record out.  What changed over the course of time between your first Relapse album and your second?

Not a whole lot changed, to be honest. We still wrote that record in a similar fashion, the way we usually write all our records. Nothing changed wildly, record to record. I think we just got better as songwriters and musicians so we learned how to execute our ideas better, but it was pretty similar. I think the budget was a little bit bigger, but it was the same.

Did anything stand out about that record?

I think musically, we were trying to push the envelope and bring in different influences. You never want to write the same record twice, so I think we definitely brought in our sound on that one. 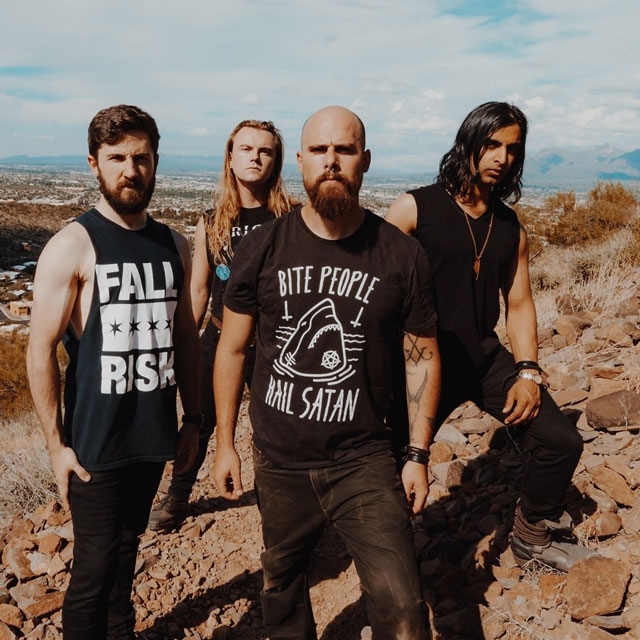