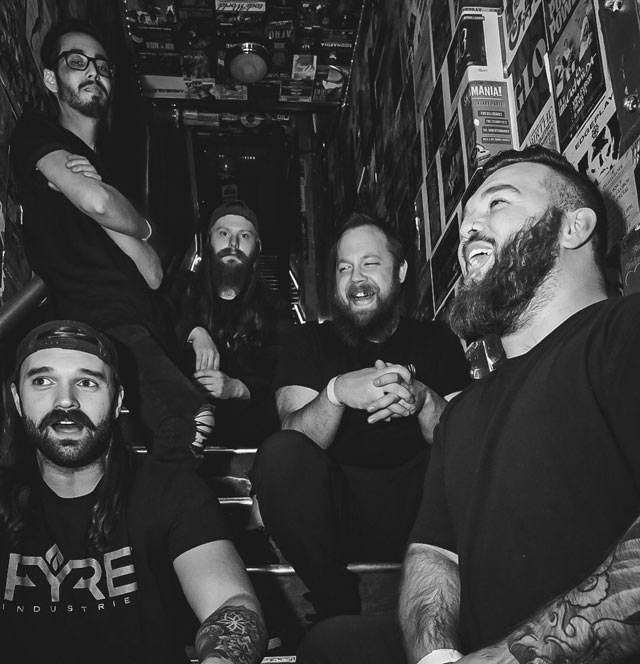 Dragged Under, the group featuring former Rest, Repose members, have released their debut album, The World Is In Your Way, on January 17th (order here). The group has been celebrating their new record by supporting The Used’s North American tour. After leaving the past behind, we caught up with vocalist Tony Cappocchi to learn more about their next chapter with Dragged Under.

For those who are unfamiliar, can you talk more about the formation of Dragged Under?

There’s not really much to say here, it’s a bit of the typically story really, Dragged under is a band born from what was left of another project (the leftover dudes that still wanted to be in a band) It’s also a bit of a super group comprised of the most dedicated guys in the Seattle and all l have a love for the type of heavy fast music we play.

What have been some challenges to go from Rest, Repose to form a new project?

Honestly we’re blessed to say there have been very few challenges. I think with Rest, Repose, we tried so hard to write what everyone else wanted to hear. With Dragged Under, we write what we love and we’re just lucky people are responding. But we’ve never seen more success than we are seeing with this project. We have a great producer, amazing fans, great management and labels calling every other day. We couldn’t be happier with this response.

What was the recording process for the new album, The World Is In Your Way?

This process was different than anything we’ve ever done, For the first time we just said, “fuck what people think, we’re doing what we want on this release” that on top of the fact that we worked with an amazing producer (Hiram Hernandez). Having that impartial ear in the room and someone who has a LOT more songwriting experience than us was a big help. He was the perfect missing piece to push us over hurdles and help us navigate the writers block that we would experience from time to time. It’s something I recommend to everyone now. We also started writing for the stage, and for the live show. We decided we wanted songs that would come across as sing along/crowd participation songs, more than what we thought radio DJ’s wanted to hear.

Can you share a few themes on the album?

I’ll take these track by track

This one should seem pretty obvious, there’s a LOT of “fake friends” in music, especially the industry side, but “The Real You” is about a few people specifically that continually claim to have our backs, but all we hear from others is how fake they are. It’s a song employing people to stop being fake with us and to just be themselves for better or worse.

This one is pretty simple, it’s about how I feel about my health all the time. And how i’ll come to these rash conclusions in my head about things that I think are killing me, only to find out im perfectly healthy.

Roots is a fuck you to the side of the industry that preys on bands. Record labels that lock bands into this shit contracts or take all their money, while the band slaves away on the road, and just an expose of the gross politics needed to play in today’s industry. I don’t care for it, and I hope to never have to participate in it.

This song is about everyone who let me down in the past, specifically in music. Members that didn’t have the dedication or drive to succeed, people who slowed down the band or held it hostage, etc. This song is about someone specifically but I’ll leave it at that. “Here for War’,’ that phrase specifically to me means, i’m here to fix the shit you’ve been messing up, get out of my way cause i’m going to do this 100% and if you’re not, we’re leaving you behind, this is a conversation that we’ve had as a band a few times, there’s no such thing as a safe member, everyone is expendable. Being in a band is more about doing it for the 4 other guys than it is about doing it for yourself. It takes a LOT to make this work. Don’t allow people who don’t care to slow you down.

This song is about my battles with myself. For a long time I blamed others for my problems, and thought it was someone else’s job to make me successful or happy. Instability was my wake up call. I wrote this song about myself and how im the reason that i’m unhappy, or broke, or tired all the time. I wasn’t doing my best, yet I thought I deserved the best. I was and still can tend to be my own worst enemy, and most of my problems can be solved by myself, I need to step up and stop complaining. This isn’t to say ALL problems for everyone are able to be fixed with the change of one’s mind, but if they can be, it’s your problem to live with and yours to fix, and if you don’t, I have little sympathy for you. No one is coming to save you, it’s up to you.

“Chelsea” is about my Fiance. She has always been my biggest supporter and I thought she deserved to be praised. She has never once asked me to put my dreams on hold, she was there when I had nothing to show for all my work, and she’s still here now. In the song you can hear the juxtaposition though. I can’t say that I was always the best boyfriend / Fiance in the world. I fall short a lot in our relationship (nothing crazy honestly) just, typical shit like, not always prioritizing what she wants to do, or saying hurtful things when we fight. Either way it’s not cool, but she’s the best.

“Covered in Sin” is an acknowledgment of all my weaknesses, interpersonal, emotional and otherwise. The chorus always stood out to me, because like the song says, i’m not looking to change anything about me. Even though I know I have problems, and faults and some might even say “issues” I’m not looking to change myself right now. Some of the things that may seem like a problem to someone are what make me unique, and have led to my success. I’m focused on fixing myself where it matters most, not necessarily where others think I should.

Pretty simple, this is our protest song, not necessarily to any party / administration specifically, but really to politics as a whole. Especially to policy that affects the working class and people looking to better themselves. The american people forgot that the Govt. works for them, not the other way around, hold on to what rights you have, and NEVER give them up.

I was in a really hard relationship right after high school, with a girl that I really loved, but she was battling a drug addiction, and barely 6 months sober. This was really a situation that I should never have gotten involved in, she needed time to figure herself out and I was too young to be trying to take on someone else’s shit. This was the reason I ended up leaving the town that I was born in after 21 years, I was hurting so bad, that just driving past the street she lived down would put a pit in my stomach. I always worried that one day I’d find her overdosed, or strung out on the floor, and I just couldn’t keep trying to save her, I needed to figure myself out first, but quitting her was one of the hardest things I’d had to do up till then.

How has the tour with The Used been so far?

The shows have been insane. As a small / newer band, to walk out on stage every night to a roaring crowd and a full room, it’s more than we could ask for. Truly we feel blessed. The crowds have been overwhelmingly positive. They seem to be really locking onto the nostalgia in our music of the early 2000’s skate punk that we’ve been trying to bring back. We always hang out at our merch booth after each show and some of the people are saying some things that blow our minds daily. People who have never heard us say things like “you’re going to be huge” or “I thought you were a feldman band based on the songwriting” that will never get old.

The goal is to tour as often as possible! That’s really all! Outside of that, we’re just trying to grow the team, maybe a record label to family to help us get some more opportunities.

We absolutely couldn’t do this without you, thank you for supporting us and believing in us. You are Dragged Under. We just play the songs. 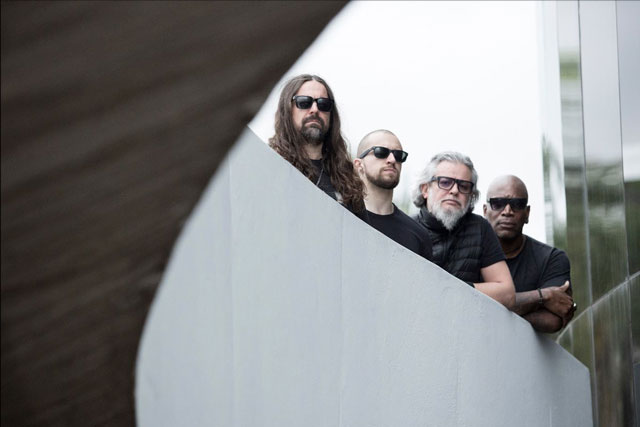