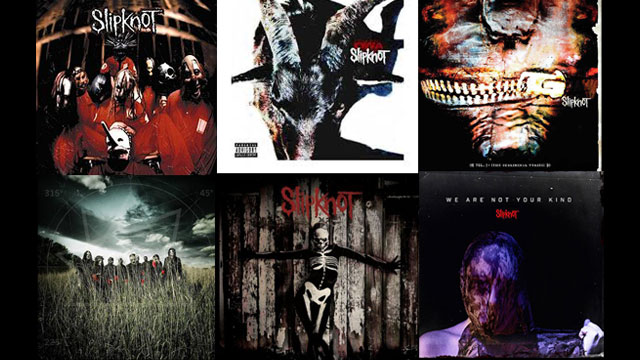 Slipknot’s new album We Are Not Your Kind has finally arrived today (9th) via Roadrunner Records. This marks the group’s overall sixth studio effort as it was just twenty years ago when the band released their self-titled debut. After waiting five years for a new album, we decided to have a headbangers brawl on ranking all six.

Chris Annunziata: This is tough. I’m a huge fan of Slipknot and love all their albums in different ways. Want something disgusting and heavy? Iowa. Want something more melodic but dark? Vol. 3. Overall, I would have to pick their Self-Titled as my favorite. I love the style of the record and the production. It’s the home of all the Slipknot classics. Iowa is amazing but I usually go back to the Self-Titled the most. I discovered the band right before Vol. 3 came out, so there is nostalgia surrounding that album. The Gray Chapter was a huge comeback after the disappointing All Hope Is Gone. Don’t get me wrong, All Hope Is Gone is good but was nowhere near the level of the other albums. After waiting four years after Vol. 3, it did not reach the level of expectations I had. It had a lot of filler songs and didn’t resonate with me like the others. It’s hard to judge We Are Not Your Kind because I haven’t had a long time to fully digest the album. It’s a great record but as of now, I don’t think it’s better than The Gray Chapter.

Bram Teitelman: I’ve always liked Slipknot, but casually. I wouldn’t consider myself a maggot, and it’s been a while since I’ve put on a Slipknot album and listened to the whole thing (unless you count the new one today).

That being said, since I’m only one listen in to it, It’d be hard to objectively judge it, so you’ll have to get back to me on it. If you look at the band, they’ve got an interesting trajectory, in that the first album was like a punch to the face. There really wasn’t anything like it, and it’s hard to improve on something you’ve never heard before. It was pretty great that they put an album out that was even heavier with Iowa. There’s going to be black metal and hardcore fans that will never give them a chance, but I’d put some of the heavier moments of their first two albums up against anything Code Orange or even Nails are doing these days.

I don’t want to say they lost the plot after that, because they still write a handful of catchy songs every album. But at this point, it’d be hard to be surprised by a Slipknot album. I think the last time I was legitimately surprised was Vol. 3, where “Vermilion,” which was heavy, but more melodic than they’d ever gone, but didn’t sound like Stone Sour. They’re definitely an interesting band that now write music that  doesn’t have to rely on their gimmickry, but that still makes them an interesting band.

Zenae Zukowski: Like Chris, selecting an order is difficult. Slipknot is a big part of my life. Hell, if it weren’t for them, I probably would have never found my best friend. I’ve listened to Slipknot since their self-titled debut. It feels like yesterday when I had a few friends wear those orange jumpsuits, and it was also the time when wearing masks was a brand new thing (R.I.P MudVayNe). I will never forget what an old friend said to me, “Slipknot is one of the good nu-metal bands.” There was a long time when it felt like you weren’t allowed to mention the term “nu-metal,” in the metal community and that’s probably why Vol3 isn’t on top of my list. As you get older, the truth is: you listen to whatever the hell you want.

The group’s debut album will always be my favorite and remain untouchable. It’s what my coworkers at the time used to blast on Friday nights at the music store. Nothing will beat  “(Sic),” “Surfacing,” and “Wait and Bleed,” period. After their explosive debut, it took me a long time to get into Iowa. Over time, that record grew onto me. Maybe it was after hearing “My Plague” on the Resident Evil soundtrack or blasting “People = Shit” on days when I just had it with people. In time, I went back to it and rediscovered its greatness.

After giving the new album a few spins, I decided to place it at number three. There’s a lot of anger in We Are Not Your Kind and as I said in my album review, it might not be their most influential to date, but the creativity and production of it all have brought it to number three. Plus songs like “Orphan” and “Red Flag” helps the boost. Then we have .5 The Gray Chapter. This record brought me to Knotfest in 2014, and it also brought a second “Fuck it” anthem with “Custer.” I consider this record one of the most powerful in terms of emotions. All Hope Is Gone marked my return to maggot status and Vol3, I will go back to it one day, but it arrived during a time when I wasn’t feeling the group anymore. We all have stages, and you can hear Slipknot’s in each record. No matter how mellow, heavy, or melodic, their production value never disappoints.