Sonic Temple Art & Music Festival returns to the Historic Crew Stadium in Columbus, Ohio after a 3-year hiatus. This Memorial Day Weekend May 25th-28th, some of the biggest names in Rock today will bring this much anticipated festival back to life! Foo Fighters, Tool, Avenged Sevenfold & KISS, Godsmack, Rob Zombie, Queens Of The Stone Age, Deftones, & Many More are enlisted to make this comeback one to remember! Hosted by none other than Sirius XM’s Jose “Metal Ambassador” Mangin, and presented by DWP, Sonic Temple will be a festival to be reckoned with.

The daily music lineup for Sonic Temple is as follows:

Presale For Email List Subscribers Begins Wednesday, January 11 At 10:00 AM ET. Sonic Temple passes go on sale to the general public on Friday, January 13 at NoonET. New passes in 2023 include Stadium VIP and the Columbus Owner’s Club (4-day pass). Returning pass options include Field GA, Field VIP and Stadium GA—all available as weekend or single day passes. For a full description of passes and pricing, visit the official website.

Prices start as low as $109.99 + fees. And through January 31, passes can be purchased for only $10 down, with layaway payments amortized evenly through April. Passes are also available at DWPSonic.comwith “buy now pay later” via ShopPay. To keep up to date on any changes as well as to purchase tickets visit www.sonictemplefestival.com 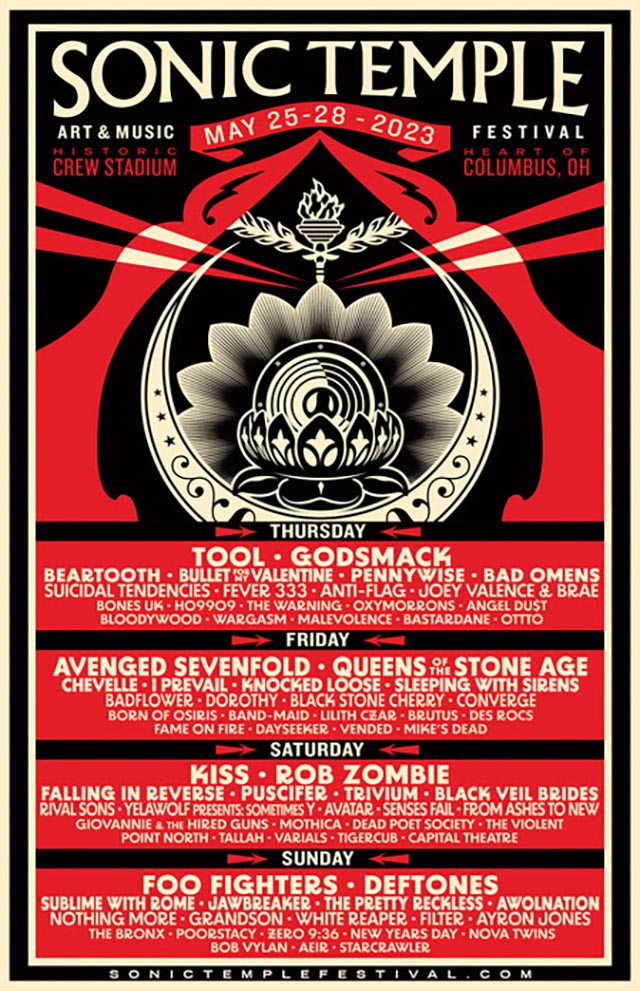