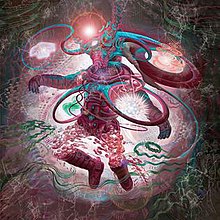 Another year, another Grammy Awards Ceremony that most metalheads probably ignored in favor of something that wasn’t hosted by LL Cool J. Inevitably, a huge surge in sales for winners and nominees occured this week (except for a certain winner for best hard rock/metal performance, ironically). So you would think that, in a world full of Justin Biebers and Katy Perrys (see also: boobs), metal wouldn’t stand a chance on the charts this week, right? Wrong. Its actually been a pretty good week for metal, with one act appearing on the charts twice, and in the top 10 no less. Not too shabby, eh?

What would Jesus buy? Well, if he liked a somewhat generic rock band named after a color, he’d pick up this Christian rock band’s fourth album.

Even Grammy sales boosts couldn’t stop Coheed and Cambria from making their way into the top 10 this week. This debuted only slightly lower than Ascension, but that’s irrelevent when you consider a) how good of a debut this is post-Grammys and b) Ascension is on the charts as well.

Album number seven from this post-hardcore act breaks into the top 60 and is also the first not to feature long time guitarist Neil Boshart.

The Bronx are back with what is actually album number six for them, with the previous two albums bearing the names of the band’s alter egos, Mariachi El Bronx.

Riverside, Shrine of a New Generation of Slaves (InsideOut) 1,100 sold

Polish progressive rockers get a good start with album number five. Apparently, this album debuted at number 2 over in Poland, whereas Tim McGraw is number 2 over here. Way to go, America.

This Christian hardcore act just put out their debut album.

Funeral For A Friend, Conduit (The End) 600 sold

More post-hardcore on the charts with Welsh act Furneral For A Friend putting out album number six.

Technically, this album from these German thrashers came out back in November last year, but it only just reached our shores. Because of the delay in release, the American version of the album gets five bonus tracks

This EP from the Illinois duo comes six months after the release of their seventh studio album. It’s a good debut for an EP.

Technical deathcore act Rings of Saturn puts out album number two with more songs influenced space and aliens that could probably turn Giorgio A. Tsoukalos into a full-blown metalhead.

Proving that acoustic guitars (or grandpa’s guitars as Dethklok might say) are quite metal, Ancient VVisdom debut on the charts with album number two.

The best part about this album is that Kid Rock is not longer anywhere to be found.

A second week drop, but Hatebreed is also preparing another awesome tour.

Do any of the notes from the underground tell you how to keep your album from dropping?

Black Veil Brides, Wretched and Divine: The Story of the Wild Ones (Lava/Universal Republic) #106, 4,225 sold

The Wild Ones sound like a motorcycle gang ranging from ages 10-12.

There’s a new lyric video out for these guys if you weren’t aware.

And another hefty boost to Shinedown.

Another drop in sales, but still going steady.

The strange case of not getting a sales boost after winning a Grammy.

Hanging in there after crossing the 120,000 mark this week.

If there was ever a fighting video game staring this band, their finishing moves would either be their namesake or just chucking gold records at oppenents.

This album is clinging onto the charts.

This album just sold over 20,000 copies total. Not quite an empire yet, but not bad.

This album got a 21% boost this week.

And yet the album art looks nothing like Earth.

A small boost in sales indicates a good week for Rise Records.

If you play the album backwards, it sounds like Brad Garrett strangling Ray Romano.

The Plot In You, Could You Watch Your Children Burn (Rise) 420 sold

These guys just finished opening for Emmure and Whitechapel on The Brothers of Brutality tour.

Apparently, all the the track titles on this album are name after films. And not all of them good ones.

For your entertainment, here’s a picture of Holy Grail with Eddie.

Guess the band’s first visit to America helped them re-debut on the charts.

Apparently, this album has been out since July 2012. Better late than never?

For All I Am, Skinwalker (Equal Vision) 340 sold

With a boost in sales, it looks like these guys are getting a following.

Fun fact: One bonus track on the album is a  Lana Del Rey cover. Not that you should rush out to get it because of that.

Album sales still going strong for the not-Texas based band.

Tags: Ancient VVisdom, Avatar, Black Veil Brides, Capture The Crown, Coheed and Cambria, Crown the Empire, Deftones, Destruction, Five Finger Death Punch, For All I Am, Funeral For A Friend, Halestorm, Hatebreed, Hollywood Undead, Holy Grail, In This Moment, Led Zeppelin, Local H, Otherwise, RED, Rings Of Saturn, Riverside, Shinedown, Silverstein, Soundgarden, Stone Sour, Texas In July, The Amity Affliction, The Bronx, The Plot In You, The Shrine, Those Who Fear, Tomahawk, Upon A Burning Body, Voivod, Volbeat, Woe Is Me