In Criminally Slept-On, Schuler Benson takes a look at some of the most underrated tracks from his favorite prolific bands’ back catalogs.

Autopsy’s music is just fuckin’ gross. In the wake of his departure from seminal innovators Death, drummer Chris Reifert founded one of death metal’s earliest, gnarliest, and most influential pioneering acts. The band’s penchant for filth and gore is rivaled only by the sloppiness of their execution; it’s not that the music’s not well played or that it’s poorly written. It’s that when you listen to Autopsy, you can tell these dudes have labored significantly to make their songs more than just odes to festering infection… they’ve gone out of their way to make them sound gross, too. After their inception in 1987, the band went on to release four full-lengths and a handful of non-album tracks before disbanding in 1995, with several members going on to form Abscess. Like a number of their defunct peers, the band reunited in 2008 to play a few festival shows and found the spark was still there. Since then, Autopsy have been incredibly prolific, essentially doling out a new release of rot each year, with 2015 being no exception. In December, the band will shit out two releases through longtime label Peaceville Records. After the Cutting is a four-disc box set featuring selections from the band’s back catalog, as well as a substantial amount of live and rare gems. Also included with the box set are seven tracks of new material titled Skull Grinder. And for those of you not ready to dole out box set bread, Skull Grinder will also be released separately on vinyl.

Everybody knows “Charred Remains” and “In The Grip of Winter.” This week Criminally Slept-On digs up some of Autopsy’s stray chunks that may have settled in the sunken corners of the casket. Grab a shovel and let’s crack open a cold one.

Autopsy are nothing if not reliable. Their latest release, 2014’s Tourniquets, Hacksaws and Graves, while boasting a bit of sonic development, is largely in the same vein as every one of their earlier records. Sometimes, that’s more than just okay… it’s encouraged. “King of Flesh Ripped” is one of the album’s catchier tracks. It starts off with some barren riffing accompanied by the drummer/singer Reifert’s typical slurred, growled vocals before seguing into an ambling, mid-paced number filled with Sabbath-esque guitar harmonies and sludgy, syrupy bass. This song could’ve totally come off of the group’s debut full-length, 1989’s Severed Survival. Autopsy sticks to their guns.

With the band’s first comeback full-length, 2011’s Macabre Eternal, Autopsy started to really experiment with aspects of their music. Now I’ve already said there’s not a whole lot of change that’s gone into their formula over the years, and that’s true. Where they really started to push themselves the second time around was in song length; a lot of classic Autopsy cuts finish around the three-minute mark. But once renewed, the band started pushing just how much length they could tack onto these songs without getting boring or too repetitive. The formula didn’t always work with Macabre, but they really hit their stride on its followup, 2013’s The Headless Ritual. Album opener “Slaughter At Beast House” clocks in at a lengthy 6:33, but by and large, there aren’t any lulls that detract from how the song plays out. I say the same about the track I picked from Headless, “She Is A Funeral.” It beats “Slaughter At Beast House” by over a minute, features some hard-driving OSDM in the middle, and opens with some of the eeriest atmospheric guitar noodling Autopsy’s delivered since the interludes on Mental Funeral.

Part of what made Macabre Eternal so refreshing was its confidence. You’d think a band whose members are, by all rights, legends in a certain genre would be hesitant to step back into a storied career that had disintegrated over a decade earlier. But Autopsy really delivered with this comeback album. The reception for 2009’s Horrific Obsession single was warm enough; it was clear the guys didn’t wanna stray too far from where they’d left off, but while the single (and another subsequent EP) was great, it was questionable whether or not they’d be able to generate an album’s worth of new material worthy of the Autopsy name. Macabre Eternal delivered in buckets, displaying a loyalty to the genre they helped create while also upping the production and sound quality to levels that increased clarity without wiping off every last bit of grime and dirt. “Dirty Gore Whore” is the album’s second track, combining a fast (for Autopsy), driving pace with noodling, almost solo-esque riffs. It’s the perfect complement to the album’s start/stop, stomping opener, “Hand of Darkness.” 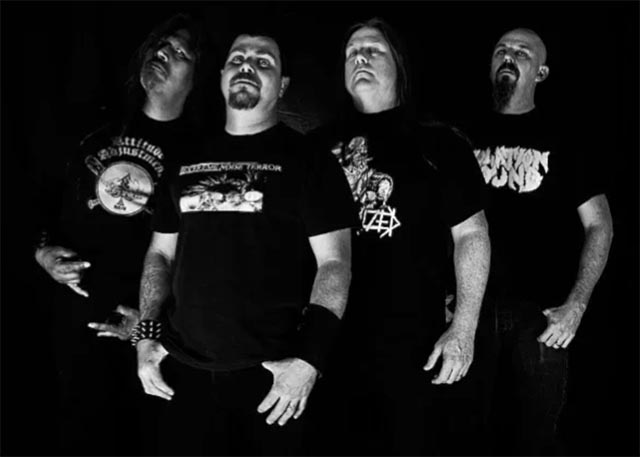