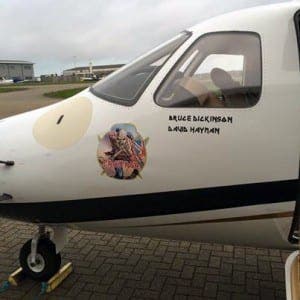 You know that guy who sings for the British legend Iron Maiden? Sure you do, because Bruce Dickinson is one of those outstanding human beings involved in metal. He has cheated death not once, but twice; also is a big honcho at a luxury aviation company and sells private jets to those who have enough money to purchase a small country. If you want to add more to the list of great things he does, what about wildlife rescuer?

An endangered species of turtle washed up on a Jersey beach in the Channel Islands with a serious infection, that led those who found it to launch a crowdfunding campaing  to get her home to the Canary Islands. A Spanish sanctuary offered to care for her once the transportation costs were covered, which at the moment was €8,000, when Dickinson stepped in and decided to take the turtle himself. Vet Peter Haworth explained:

“A jet has become available at a far reduced price and with the donations at the hospital and online we have reached the price we need for the jet. It shows how much one little turtle can bond people together. We had interest immediately from Dubai, Australia and America.”

If you were searching for a new metal hero to look up, and for some reason it wasn’t Dickinson, we recommend you worship him From Here to Eterenity.