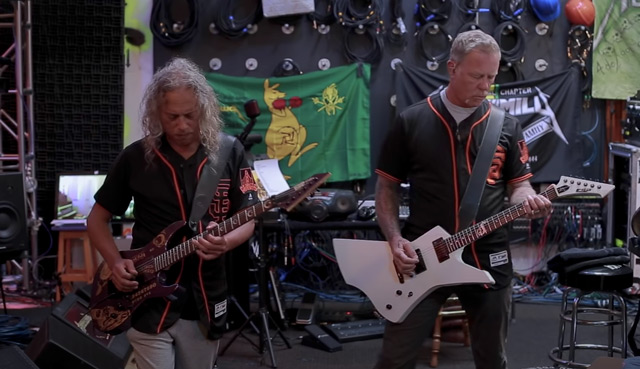 Metallica’s James Hetfield and Kirk Hammett didn’t let the COVID-19 pandemic get in their way to perform “The Star-Spangled Banner” last night (23rd) before the baseball game between the San Francisco Giants and the Colorado Rockies. While the two weren’t physically at the stadium, they made a virtual performance a few miles away at the Metallica Headquarters to perform the U.S national anthem before the Giants home game. This would have been the eighth consecutive year.

In addition to their pre-recorded video, the band shared a few clips on their Facebook page. One of the clips showed bassist Robert Trujillo throwing out the ceremonial first pitch for the game. The rest was a virtual discussion between guitarist Kirk Hammett and former Giants pitcher George Kontos on the nerves factor before performing, their favorite parts from S&M2, and how Hammett became a horror fanatic.