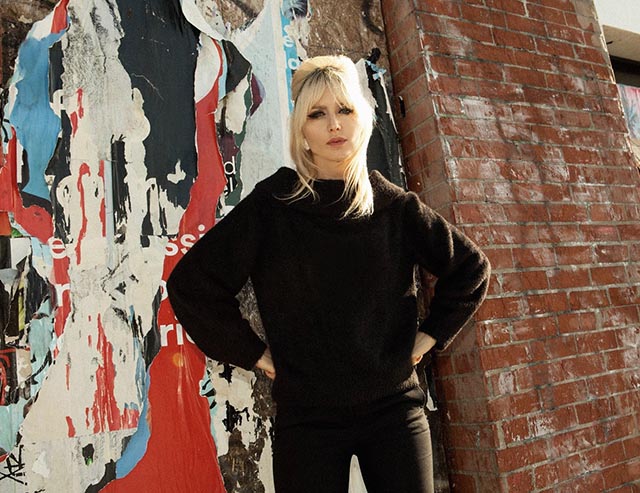 LA rocker Kate Clover has recently released her debut EP, Channel Zero, produced by Brandon Welchez (Crocodiles), via SongVest Records. Those who enjoy the classic rebellious beats we’ve heard from artists such as The Distillers will want to give this EP a spin. Today (10th), Clover has teamed up with Metal Insider to premiere her Hitchcock-themed video for the song about betrayal and revenge, “Tearjerker.” Produced by Rebecca Knox from Orange Is The New Black, the clip follows a story inspired by Hitchcock and Straight to Hell where this time around, women portrayed the predominantly male roles, as Clover explains in the below Q&A:

What inspired the song “Tearjerker” / what is it about?

It’s about being close to someone who hurts you. It’s About  betrayal and revenge. Love can be both beautiful and destructive.

How did the video shoot/crew come together?

The DP called Rebecca letting her know he would be in town and that they should make something. Within a week we wrote the treatment and by the following weekend we were out in Joshua tree filming. It came together very quickly!

Tell me about the concept of the video.

We wanted to make a desert noir style video inspired by Hitchcock and Straight to Hell. Our goal was to challenge typical casting stereotypes and tell a simple revenge story. It was interesting to cast females in predominantly male roles because it ultimately didn’t affect the outcome at all in terms of telling the story. What I learned from that was that If the actor had the essence of the character that was all that mattered and our friends nailed it. The bonus for me was I got to create my dream girl gang in the process. It was so much fun and happened so fast that it almost felt like a dream!

After being cooped up in Los Angeles all year the desert was a welcome escape. It felt magical.

Watch the clip below and order the EP here: