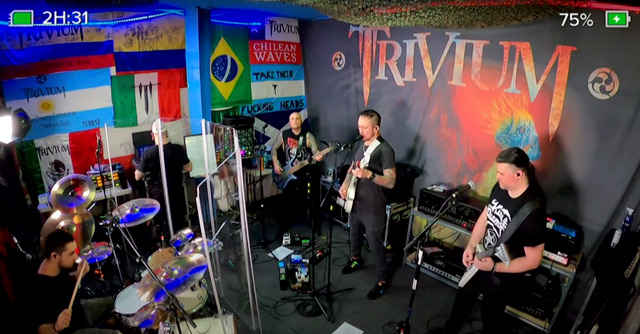 Trivium held their free Livestream Event, The Deepest Cuts, on Saturday (29th), which featured a setlist of songs that they rarely play. The stream was available for free on Matt Heafy’s Twitch channel. During the event, the group added a song towards the end of the setlist to honor the late Power Trip frontman Riley Gale, who passed away in his sleep on August 24th. The band performed a cover of Power Trip’s “Executioner’s Tax (Swing of the Axe), which you can watch below around the 1 hour and twenty-seven-minute mark.

Watch the full stream below:

01) Bending The Arc Of Fear

11) Of Prometheus And The Crucifix

15) Torn Between Scylla And Charybdis

16) The Ones We Leave Behind

Power Trip thanked their fans during the weekend for support following the death of Riley Gale with the following statement:

“We would like to thank all the fans, friends, and people around the world who have shown us so much love and support over the last several days.

Thank you for honoring Riley and continuing to share your stories, memories, and photos. May his legacy live on forever.