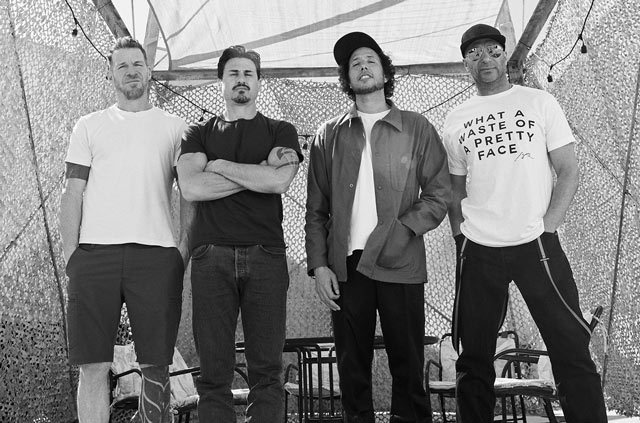 Rage Against The Machine bassist Tim Commerford has been dealing with cancer over the last year.

In a new interview with Spin published Monday (12), Commerford revealed that he was diagnosed with prostate cancer and underwent surgery to have his prostate removed earlier this year.

Said Commerford, “I’ve been dealing with some pretty serious shit. Right before I was about to go on tour with Rage, I had my prostate removed, and I have prostate cancer. I’ve been someone that’s taken a lot of pride in being in shape and taking care of myself. But it’s something where either you’re either lucky or not.”

The diagnosis was hard for the musician, but he says that he tried to remain positive. He told Spin,

“You can find yourself in a situation like I’m in where it’s like, fuck, my whole life changed. With everything that happens to me now, I wonder, am I feeling this way because I have cancer? Am I losing my hair because I have cancer? Whatever it is, it makes me wonder if it’s happening because I have cancer. And prostate cancer is a very, very, very tough one because it’s connected to your sexuality. It’s hard to disconnect from that and when you’re forced into that situation, it’s a brutal psychological journey. I’ve been trying to find support groups, and it’s hard to find people and hard to talk about it. The suffering part of it, the physical suffering after the surgery, I’ve never felt pain quite like that. I have metal plates in my head and cadaver parts in my body. I’ve done a lot of damage through sports and mountain biking and this sort of thing and I’ve always felt like I had a really high tolerance for pain, and that shit brought me to my knees. After the pain went away, I still haven’t really been able to get up, even though I’m working out and doing shit, but psychologically, the damage is severe. It’s very hard for me to not break down and get emotional.”

The surgery happened two months before Commerford was set to go on tour with RATM this past summer. At the time, he wasn’t sure if he was going to be able to head out with the band, but proceeded to join them anyway.

“Two months before the tour, I had surgery and my doctors said I wasn’t going to be ready. That was brutal. I would be on stage looking at my amp in tears. Then you just kind of turn around and suck it up. Because of Zack’s injury, we had planned these little video interstitials that came in between blocks of songs. We were meant to go on stage, play some songs, go off stage, and on to the interstitials for a few minutes. It was seamless. Then he got hurt and we couldn’t leave the stage. So during the interstitials, we’re just sitting there. That was surreal. I would sometimes sit down and try to not think about certain things. It was weird. I kept it to myself throughout the touring we did and it was brutal.”

Commerford is on the mend now, revealing that he got good news from his six-month test.

“I just got my six-month test, and it came back at zero. I was like, ‘Fuck yeah!’ That’s the best I can feel for the rest of my life. Every day I get closer to that test is like, ‘Fuck man, is this going to be the time when the number is going to go up and I’m going to the next thing, whatever that is?’ I already went through some pain and shit. And I’m continuing to go through like, some crazy shit.”

Music was one of the only things that helped him through the ordeal.

“That’s the beauty of songwriting and bass playing. When my mom was sick, that’s when I learned how to play bass. When I was on stage with Rage, there were times that I wasn’t thinking about cancer for moments. When I play in 7D7D with Mathias in the studio, I don’t care what we’re doing. I go into a trance, and I just completely forget about it. And it’s so beautiful. When I wake up in the morning, it’s like, ‘Oh, it’s a new day. Dope!’ Then it’s like, ‘Oh fuck, I have cancer’ and you can’t stop it. It puts a dark cloud on the day. When I go jam with Mathias, I just tune out and it feels so good. Music has always been there in the toughest of times.”

Commerford has been making a lot of music recently. Aside from touring with Rage Against The Machine, 7D7D, his new side project with Jonny Polonsky and Mathias Wakrat, has been working in the studio. According to Commerford, the band has nearly 20 songs completed with the ambition of writing 100. The trio premiered their second single, “Misinformed,” on Monday. It comes just two weeks after the release of the band’s debut single, “Capitalism.”

Commerford’s full interview with Spin can be found here.