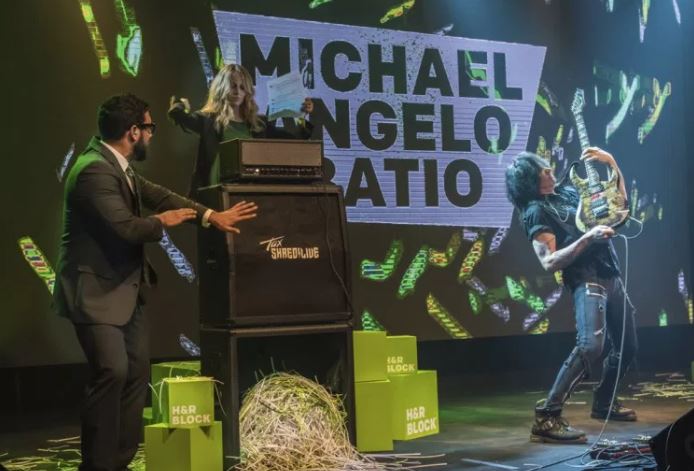 Marketing works in interesting ways, we’ll say that much. H&R Block just did what might be the most bizarre metal-themed ad since the Norton Antivirus “Dokken vs. Chicken” ad. See, Tax Day is coming up, and H&R Block is trying to get people to go there to get their taxes done. However, they’re also pointing out that you don’t need to keep most documents around for longer than three years. This, of course means that you should probably shred your old tax documents so they don’t get into the hands of people that will do unscrupulous things with them. To that, this past Sarturday (24), 400 H&R Block offices nationwide hosted free shredding events.

So how to draw further attention to something that’s, well, kind of boring when you break it down? Tie in shredding in the best way possible, which to H&R Block, meant hiring Nitro axeman Michael Angelo Batio and former Beyonce guitarist Bib McGill to play guitar live on Facebook for an hour. The company’s Facebook page hosted Tax Shred Live, which featured the two trading off licks while a pair of bored-looking actors shredded  documents in the background and/or danced around like they usually rock out to drum tracks with hired guns soloing over them. Did it work? Arguable, but hey, we’re writing about it, and now we all know that we don’t need to keep most documents after three years. Also, file your taxes.