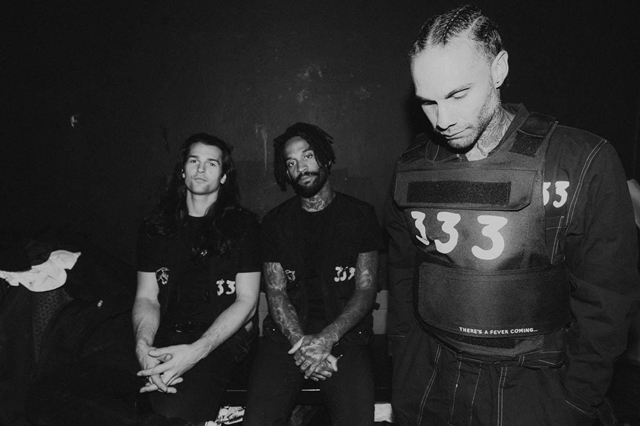 Fever 333 have announced ‘Long Live The Innocent’ a livestream performance, which will take place tonight (3rd) at 6PM EST. Proceeds and donations from the event will go to the Minnesota Freedom Fund and Black Lives Matter.

“This is a concentrated effort to encourage people to go beyond awareness and take action. With localized efforts in the name of justice for a specifically targeted group of people in this country, this will serve as an artistic activation as well as a platform to activate necessary measures for social and racial reformation. The advantages we predict we will see if crossing demographics musically in preset to proliferate a message that MUST find its way over the barriers of genre. Music and art have served as the catalyst for socially inclined movements for as long as we can remember, but for some reason, at a time where we are now granted the ability to see how deeply flawed our system is, we have slowed the charge for change. FEVER 333 has dedicated its entire platform to that change from its inception with its music, activism, even its own charity fund that sees a percentage of proceeds funneled from all profits the project receives. This is not a marketing method, this is a tool for change. Please consider widening this message for the people with FEVER 333 by joining us in this effort.”

While the metal community reacted to the death of George Floyd, Fever 333 added their own thoughts late last week with the following:

“On May 25 2020 an unarmed and non threatening black citizen named George Floyd was murdered by Minneapolis Police. George Floyd was suffocated on video which has shown not only his compliance with the orders of the murdering officer(s), but his vocal indication to them that the knee in his neck was restricting his breathing and that he was being asphyxiated. These officers chose not to listen and George Floyd suffocated on that street in front of horrified bystanders and then in front of the world. ⁣⁣

⁣⁣The murderers’ names are Derek Chauvin, Tou Thao, J Alexander Kueng, and Thomas Lane. They must be held accountable for what they have done. Make no mistake, this was murder. Despite how you feel about authority, current structures or our music, this tragedy can be seen as nothing other than that- murder.⁣⁣

⁣⁣Statistics continue to irrefutably reveal the disproportionate utilization of excessive force against people of color in this country. This video of George Floyd is yet another piece of undeniable evidence that should not be viewed as anything other than a disgustingly unnecessary and wrongful murder of another black man by the hands of those sworn to protect them and a system that emboldens the perpetrators to break the laws they made. ⁣⁣

⁣⁣There is no way anyone watching this should be okay with this the same way you should have never been okay with the countless cases before it. The time is now. We must demand more from our government, our community, and ourselves. Justice must be reshaped in America. These officers must be held accountable for their despicable actions. ⁣⁣

We must refuse this. ⁣⁣