Testament have recently revealed their new album, Titans of Creation, will be released on April 3rd via Nuclear Blast. To celebrate their upcoming record, the band has announced a North American Tour. Joining them on the road will be The Black Dahlia Murder, Municipal Waste and Meshiaak. The trek kicks off on April 20th in Phoenix, AZ and is scheduled to run through May 28th in Anaheim, CA. Tickets go on sale this Friday (7th) at 10am local time.

“I’m super excited about Testament’s tour with The Black Dahlia Murder and Municipal Waste . As much as we’ve enjoyed touring with bands who emerged before us, from our own time period and slightly later eras, it will be a fresh experience to share the bill with these two, both of whom formed in the new Millennium, each with a unique perspective and a sound unlike anyone else. It’ll be a fun night of music. Don’t miss it!”

“The new album, ‘Titans Of Creation,’ comes out on April 3rd. We are going to be on the road in the USA and Canada in April and May. We hope to see all your thrashers out there. Come out and check out the new record and show! Metal forever!”

“Hey everybody! I am here to tell you that the new Testament album which drops on April 3rd called ‘Titans Of Creation’ has to be one of our best records of all time. Every Testament fan out there has to pick this one up cause I believe that everybody is going to love this one like crazy. Right on! We’ll see you out on the road on all the dates we have lined. See you soon!” 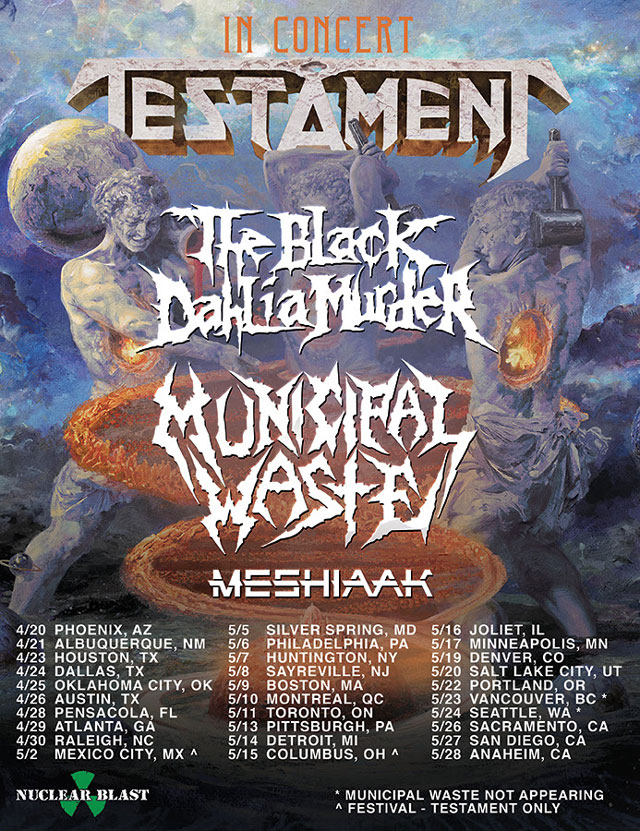