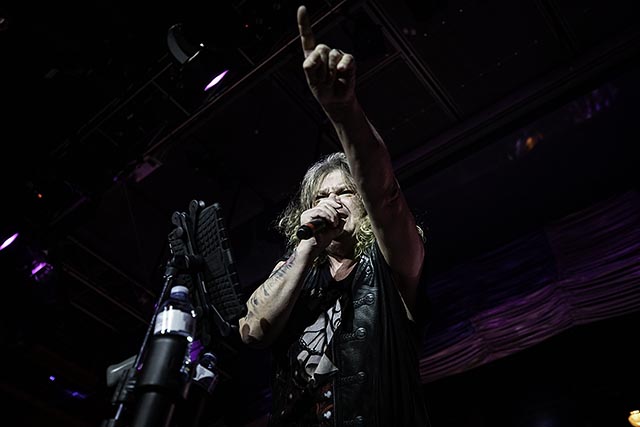 We are saddened to report that Grim Reaper vocalist Steve Grimmett passed away at 62. His death was unexpected, and his family and the music community continue to grieve this tremendous loss. Grimmett’s passing was confirmed by his brother Mark Grimmett, who shared the following statement on social media:

“I don’t really know where to start so I guess I will just come right out with it. It is with great sadness and a very heavy heart that I have to tell you all as many of you know him my very talented brother Steve Grimmett very sadly passed away today, my heart goes out to Millie his wife my Mum and Dad, Russell , Sami and Ethan . I will miss you more than words will ever say, love you bro xx.”

Grimmett was a fighter who lived to create music and did whatever it took to return to the stage following his leg amputation in 2017 after a foot and bone infection that occurred after a show in Ecuador. Grim Reaper formed in the late seventies, bringing classic records such as 1983’s See You In Hell and 1985’s Fear No Evil. However, the group split in the late eighties and resurfaced in 2006 under the name Steve Grimmett’s Grim Reaper, which released two albums under the new moniker, 2016’s Walking In The Shadows and 2019’s At The Gates. Steve’s legacy will remain, as he’s been an inspiration musically and as a survivor, battling all odds, eager for survival, and not letting a near-death experience stop him from making music. As horrific as the amputation was, Grimmett was an inspiration to show how to regain the courage not to give up. Our thoughts go to Grimmett’s family and friends during this difficult time.

Awful news to hear about the passing of Steve Grimmett from Grim Reaper. What a voice and a super kind person. My sincerest condolences to his wife Millie, his family, and friends.