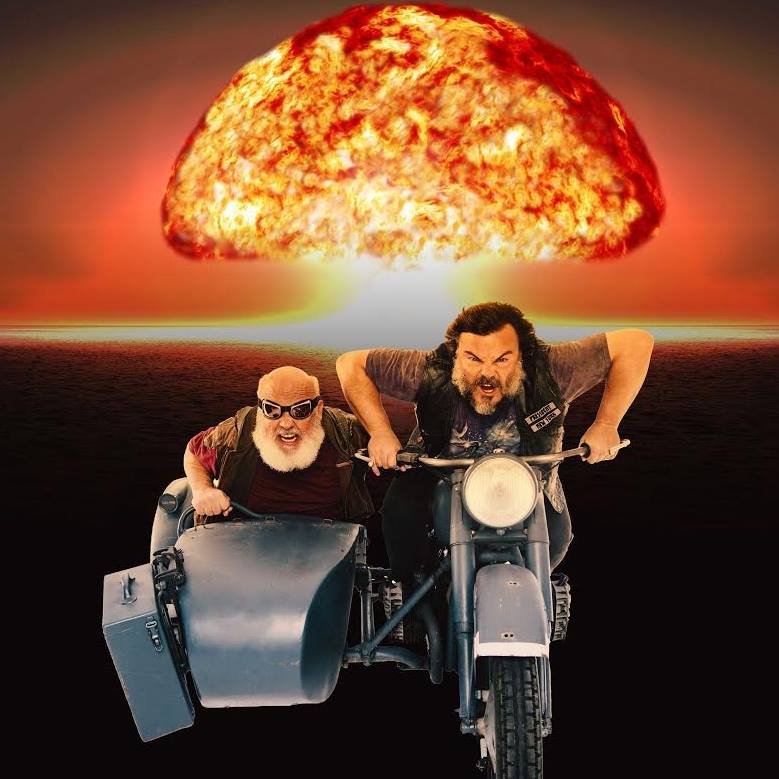 The self-proclaimed “greatest band in the world,” Tenacious D kicked off their new album cycle with two shows at Brooklyn’s beautiful King’s Theater earlier this month. Since their debut album in 2001, every six years or so The D has released something new. Their 2006 feature film, The Pick of Destiny (which included a full-length soundtrack), flopped at the box office, and despite mostly negative reviews became a cult hit, cherished by legions of rock and metal fans. The duo returned in 2012 with the album Rize of the Fenix, which became the best selling comedy album of the year, selling 113K units and garnering the duo their first Grammy nomination. Rize’s title track chronicles the band’s sense of failure after The POD’s release, and ultimate decision to “fuckin’ riiiise again!”

Conceptually, Tenacious D’s newest offering, Post-Apocalypto feels more like a sequel to The POD than Rize. The six-part YouTube series picks up right where The D left off, with Jack Black and Kyle Gass smoking pot on the couch together, once again fighting the quintessential musician’s battle: paying the rent. One might argue that at the end of The Pick of Destiny, Dave Grohl’s Satan actually agreed to pay their rent, but there is no time for such fancy things as continuity. The two hatch up an Evel Knievel-style scheme to jump over a shark tank in a mo-ped and (presumably) win a bunch of money, but are stopped in their tracks by a nuclear explosion, which wipes out most of humanity. The D spends the rest of the series on an epic journey that involves graphic sex with a clan of “cave women,” fighting not one, but two giant penis-monsters, and infiltrating a KKK-guarded White House to steal an ancient magical orb from President Donald Trump Jr, who ultimately renounces his hateful behavior in “Colors,” one of the most tender, albeit intentionally heavy-handed songs the duo has ever written.

Trump Jr.is ultimately killed by The Terminator, who was built in the future by Black’s son and sent back in time to (obviously) save The D. Post Apocalypto shines brighter than anything in The D’s catalogue because Black and Gass had complete creative control over every inch of it. The show plays more like a teleplay set to music, with the visual element consisting of still drawings (done by Jack Black) zoomed in and out with all the technical prowess of a stoned iMovie user. Conceivably, some fans may be turned off by the low-budget nature of Post-Apocalypto, but the 3,000 New Yorkers that were treated to this abbreviated version of the series seemed to love it. The D played through the entire new album from behind a transparent screen, on which scenes from Post-Apocalypto were projected between songs. Every new song seemed to garner a similar reaction: people seemed not to know the music well enough to sing along, but met each absurd line with uproarious laughter and applause. One highlight of the Post-Apocalypto set was the x-rated ballad “Making Love,” sung by the cave women, intent on repopulating the Earth.

“Go with it, don’t be afraid / we are your friends and more / it’s important that we fuck right now / so let your penis explore.”

These lines in particular garnered belly laughs from every corner of the room. While there is an abundance of overt sex in most things The D has produced, “Making Love,” may take the cake for the most explicit Tenacious D song ever, making classic tracks like “Fuck Her Gently,” seem tame by comparison.

Tenacious D is probably better known for their comedy than their music, but there is much to appreciate here, particularly Jack Black’s voice. Metal fans are used to aging vocalists like Ozzy Osbourne, Dave Mustaine, and Vince Neil struggling through their live shows. Black’s voice, however, seems to have actually improved with age, like a fine scotch. The opening number, “Hope” showcased his unbelievable dynamic range, from its gentle opening to its near-operatic climax..

Gass is also now contributing more vocals than ever before – while his live voice is not as polished as Black’s, he can certainly hold his own. The gut-bustingly hilarious duet between Black and Gass, “Fuck Yo-Yo Ma,” was a clear comedic highlight of the evening. One likely reason Post-Apocalypto has not yet reached a broader audience is its bare-bones presentation. Black admitted during an interview on Steve Jones’ KLOS radio show that they had pitched the show to just about every network and were turned down, so they decided to go the DIY route and just put it up on YouTube for free. The view count for the series is telling. Chapter 1 (Hope) has just over one million views, while the number drops off steeply to just under 300,000 for Chapter 2, and just under 70,000 for Chapter 6..

Much was made of The Pick of Destiny’s commercial failure, with some critics harping on these numbers as an indication of negative fan response. I would argue that what The D’s hardcore fans lack in numbers, they make up for in intensity. The musical and emotional highlight of the evening, without a doubt, was “Kickapoo,” the opening number from The Pick of Destiny. I have never in my life heard an audience sing along more passionately than during this and several other songs from the movie. The Pick pf Destiny brings me to a larger point: the influence of Jack Black on the modern rock landscape.

I can attest that for myself and a good chunk of young rock fans I’ve met, the first real exposure we had to rock music was the 2004 movie School of Rock, featuring Jack Black’s first major role where he essentially played a fictionalized version of himself. The movie introduced Led Zeppelin, Motörhead, AC/DC, and The Ramones to millions of kids, many of whom bought the soundtrack, and some of whom (including me) actually went and joined the real life School of Rock (run by Paul Green at the time).

When The Pick of Destiny was released two years later, many of the kids who knew Black from School of Rock simply weren’t old enough to go see it. I’ll always remember secretly ordering the DVD on my parents’ Netflix account and faking sick so I could stay home from school as soon as it arrived. Since 2006, millennial rock fans have studied The Pick of Destiny, and hence grown up with Black and Gass as musical icons, and their film as sacred text – which is why Post-Apocalypto feels so magical. Our heroes have returned, not to lament their past failures, but to bring us back into the universe of The D, spark up the bong of destiny, and spin us another fantastical yarn.

The emotional weight of Tenacious D among millennials is often underestimated, but it rang fairly clear to all of us in that theater. The whole joke of The D is that they think they’re the greatest band in the world, but in reality are just two overweight stoners playing jokey acoustic songs about food, sex, and the Devil. The truth is that Tenacious D, along with their fantastic backing band (John Konesky, John Spiker, and Scott Seiver) are capable of performances rivaling “serious” arena-rock bands in intensity. At this point it isn’t really a joke that Tenacious D are the greatest band in the world, it’s just sort of… true.