While I’ll admit that as a proud black metal elitist I don’t have many American extreme metal bands in my listening rotation, but after my long-delayed live introduction to Goatwhore on their 2014 tour opening for Behemoth and 1349, they turned me on to their dirty, blackened, southern speed metal sound. As Chip McCabe mentions in his latest interview with lead vocalist Ben Falgoust, the band brings a true passion and exuberance for the scene. These guys grind it out on the road year after year and have nearly as much energy as my two pre-schoolers after thirty minutes in Chuck E. Cheese. That 2014 show really piqued my interest in the band and I purchased Blood for the Master.

The following year I caught Goatwhore at Inferno in Oslo, Norway.  It was an incredible bill with Enslaved, Sargeist and Skeletonwitch playing the same evening. Apologies for the gratuitous name-dropping but I was engaged in a passionate conversation with Abbath by the side bar about the finer points of flipping one’s eyelids inside out when he stops mid-sentence, looks at me quite seriously and inquires, “Wow!  Who is THAT playing now? That’s really, really good!” As Goatwhore launched into their first song, we walked over to the front of the stage and quickly watched as all the floor space immediately filled in. Many Norwegians had never seen Goatwhore live and were obviously quite impressed. After that show I fervently ordered the entire back catalog and filled up my car’s CD changer for my daily 100 mile commute out to the Amish country. I will admit, Goatwhore provides an interesting soundtrack to my daily scenery of horses and buggies, endless cornfields and… well… goats.

Needless to say, I was excited to see Goathwhore’s return to Philadelphia at the Theatre of Living Arts in Philadelphia opening for Amon Amarth. Per usual, Goatwhore did not disappoint and clearly there’s a great deal of buzz about this band – even as they prepare to release their 7th record, Vengeful Ascension.  The venue was absolutely packed before Ben, Sammy and company even took the stage. I overheard so many talking about how they were excited to check out this New Orleans quartet for the first time. Even the slightly-too-expensive “VIP” sections were completely packed with many patrons paying double digits for definitely-too-expensive drinks. The floor was jammed – completely jammed – and it only became even more dense after the third song when the bars cleared out of the folks who were “just there to see Amon Amarth” as they realized that they were potentially missing an incredible opener.

Goatwhore played a “greatest hits” set along with the title track to their new record releasing in June. “Schadenfraude,” “Baring Teeth for Revolt” and “Alchemy of the Black Sun Cult” (my personal favorite that opens with a quick homage to Thomas Gabriel Fischer) whipped the Philly crowd into a frenzy. Philadelphia, home, of course, to the Broad Street Bullies, likes their metal brutal and at a breakneck pace. Sammy Duet’s riff after prodigious riff coupled with Ben’s contagious fieriness and meshed with the unfluctuating rhythm section of T.A. Coleman and Zack Simmons, is a felicitous soundtrack to the City of Brotherly Love’s working class roots.

One of the aspects of this band that appeals to so many is that they cover some macabre and aphotic subjects in their lyrics but they do so with a slight smile on their face. The music is dark and biting but they’re incredibly down to earth and really cherish their fans. These guys clearly won this edgelord (yeah, I’m reappropriating the term) over and I’m anxiously awaiting the band’s return to the East Coast for some more proletarian savagery. 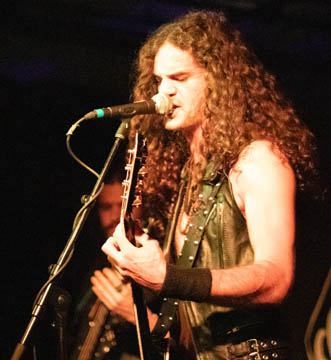