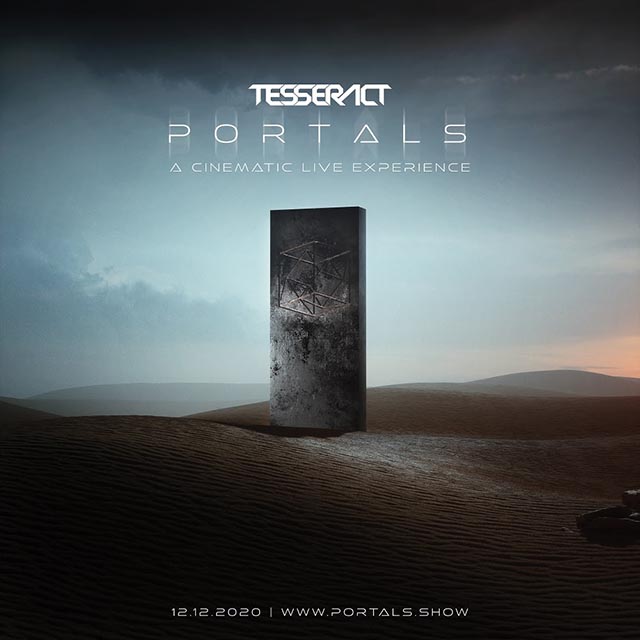 2020, the year of the Livestreams! In May, during the early days of the pandemic lockdown, the English progressive metal act, TesseracT, hosted their first Livestream. It only featured each member separately as they performed from their own homes. This time around, the band reunited together on stage and went all out to deliver a high-quality and exuberant experience for their fans. The band teased Portals as a “cinematic live experience” and “a gateway into their world,” and did just that with the outstanding climatic production.

The production value for this event was spectacular. The lighting design for the stage was beautiful and blended so well with the music. It added an extra flair of visual representation for music that is already captivating on its own. Whether it was a blistering, heavy riff or a dark, sultry melody, the visuals were on point and focused on the alluring setting. Filmed in 4K, the performance had a vivid color scheme and danced with the tonality of the heart-invoking lyrics expressed by frontman Daniel Tompkins.

The musicianship of this band is phenomenal. Watching them play and share their craft is an experience all on its own. I would argue that some songs sounded better during this performance than on the studio records. The instruments and vocals were perfectly mixed, and everything was so crisp and impactful. Tompkins sounded great and hit every note effortlessly, even when shifting between coarse screams and soothing melodies. Holding out notes in songs such as “Concealing Fate, Part 2: Deception” in a live setting after singing for 30+ minutes straight is a feat not many vocalists can do. Alec Kahney and James Monteith’s guitars sounded massive and have that tasty, striking guitar tone most guitarists salivate over. Kahney did a remarkable job with the mixing and mastering, which raised Portals to another level.

Shout out to drummer Mike Maylan of Monuments who filled in for Jay Postones, who chose to stay in Texas to avoid transmission risks related to the Coronavirus Virus Pandemic. Maylan is one beast of a drummer and is such a pleasure to watch. You can hear Postones’ talent on the albums, but watching Maylan replicate it live in action is a whole new level. It has you appreciate the level of skill and talent he puts forth into his art. Watching the patterns he does with his feet while incorporating his hands’ intricacies has garnered a new level of respect. I can only dream of being that technically proficient with my instrument.

Overall, everything from the stage to the sound to the visuals were killer and worked well together for a beautiful two-hour venture. TesseracT should be very proud of themselves for delivering such an immense quality of work for their fans during these unfortunate times. Portals has elevated my respect for TesseracT and made me want to revisit their entire catalog while eagerly waiting for their next record.