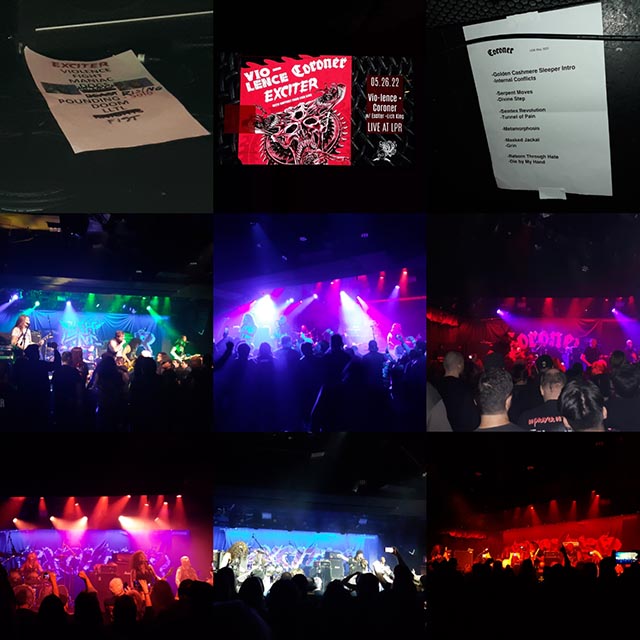 Maryland Deathfest, the largest, heaviest metal festival in the U.S, celebrated a most triumphant return in Baltimore with a lineup that is as impressive as previous years (though 2022 is supposedly the farewell installment). A big surprise came when two of the many featured groups, Vio-lence and Coroner, would team up for five co-headline shows. I was stoked knowing that the conclusive date of that mini-tour leading up to Maryland Deathfest would wrap up in New York at (Le) Poisson Rouge with support from Exciter and Lich King.

Upon arriving in Union Square at around 4:00 P.M, I power walked to St. Mark’s Place. After indulging in a beast of an Eastsider burger at Paul’s Da Burger Joint and a little window shopping, it was time to head to the venue with ample time to enjoy the weather.

The Massachusetts thrash conquerors known as Lich King were the first highlight of the evening (they make heavy metal FUN!) I saw Lich King once billed on Rage of Armageddon 3 in 2015. They put on an entertaining performance and had the first handful of attendees all fired up. The acoustics were good (New York usually knows what’s up when engineering live audio). There is nothing more amusing than watching Lich King making people mosh during their whole set.

Exciter was on next, almost in disbelief that I was seeing them with the inclusion of Coroner. I embraced every moment. Exciter reminded me how you can have lots of techniques and still have fun. Exciter performed ten songs and put on a stellar performance with lots of energy. I enjoyed Exciter’s set with Dan Beehler getting over the top with his double-duty antics of drumming and singing. Manhattan got to witness something extra special with Exciter having Phil Demmel from the Bay Area thrash legends Vio-lence join them on stage for a speech praising Exciter and a performance of Under Attack.

It was almost time for the return of Coroner, and I felt the gravity of how the expansive crowd was enthusiastic to see them. Coroner played a fusion of death metal, prog metal, and thrash. The songs had gritty bass and quite gutsy vocals from Ron Royce. A few of them took you on an ethereal journey which was brilliant. Coroner also performed only ten songs with what honestly felt like they were the main headlining band that night. They made up for a thirty-year absence by giving their all. Coroner mixed ultra technicality with a lot of energy and were not lifeless for a single moment.

It would soon be time for the evening to end with Vio-lence. Vio-lence presented a dominating, grooving performance with tons of energy and vocal acrobatics from Sean Killian and high-octane riffs from Phil Demmel during the set. Vio-lence showcased a full-on throwback set-list mainly focusing on Eternal Nightmare and Oppressing the Masses while also promoting their recently-released extended play Let the World Burn at the same time. Phobophobia, Calling in the Coroner, and Eternal Nightmare sounded great. With that said, I enjoyed seeing Vio-lence again and had a marvelous time seeing three other equally superb bands. 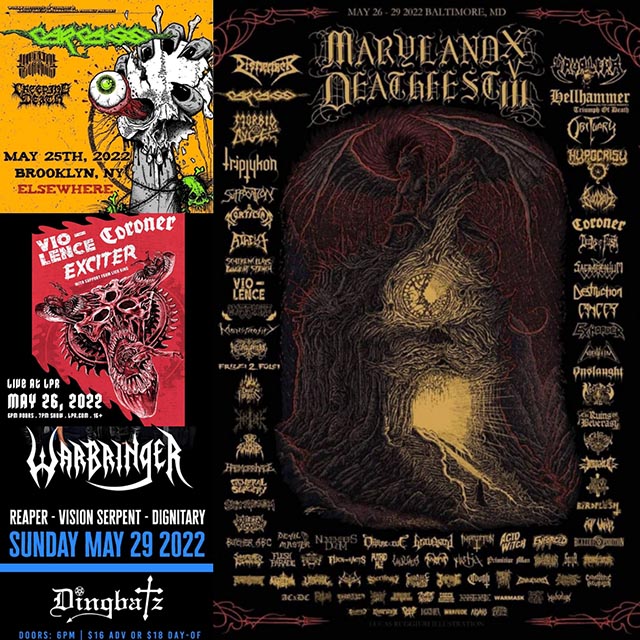