When my friend Alex Kayne mentioned on Facebook that Lez Zeppelin was performing in Brooklyn to honor Led Zeppelin’s timeless double album, Physical Graffiti, there was no way I would want to miss it.

Lez Zeppelin rule. I felt that I needed to see such a defining classic rock release again and with a better view. I first saw them perform all of Physical Graffiti at Manhattan’s Gramercy Theatre to celebrate its forty-fifth anniversary, four weeks before the world went into a soft exile in 2020.

I ventured to Sutphin Blvd/Archer Ave in Queens via a Penn Station bound LIRR while feeling a little homesick after some brief family time in Ronkonkoma the day before that would soon subside, gradually realizing that wondrous times drew near.

At around 7:30 P.M., I arrived at the Brooklyn Bowl. There’s something otherworldly about walking into a venue and hearing Solar Angels by Judas Priest on full blast in the distance to get the adrenaline rising, chosen by the East Coast legendary hard rock / heavy metal DJ Alex Kayne to set the mood for the headliner. Alex did it up for probably two hours while he created a vintage atmosphere in an old-school feeling bowling alley while the attendees went about a line or two of bowling. Alex got everyone ready for another brilliant night with Lez Zeppelin, spinning a great variety of heavy music from Judas Priest, Rainbow, Rush, Sixx: A.M, and more.

They started with Physical Graffiti’s opener, the classic Custard Pie. Brooklyn got treated to more classics like Trampled Under Foot and deep tracks, including other die-hard Zephead favorites like The Rover, The Wanton Song, and even Sick Again (that album’s conclusive cut) and capped the evening off with Black Dog and Rock and Roll. I wanted to see Physical Graffiti surrounded by other like-minded Led Zeppelin fans without mandatory theatre level seating. Where you are can affect how you enjoy a concert experience. What a difference it made. Unavoidable seating, please leave the hall.

Lez Zeppelin represents a very loose and unpredictable Zeppelin tribute which is how everyone should experience Led Zeppelin’s music. The set was not boring for a moment as those ladies had everyone dancing. Lez Zeppelin is the kind of tribute that makes you want to dance or fuck or kick some ass!

After a sensational evening, I instantly purchased a satisfying post-show steak quesadilla at the nearby Mexico Lindo food truck. I headed home to come in clutch at work the morning after a few days of family time and another all-killer, no filler evening with Lez Zeppelin. 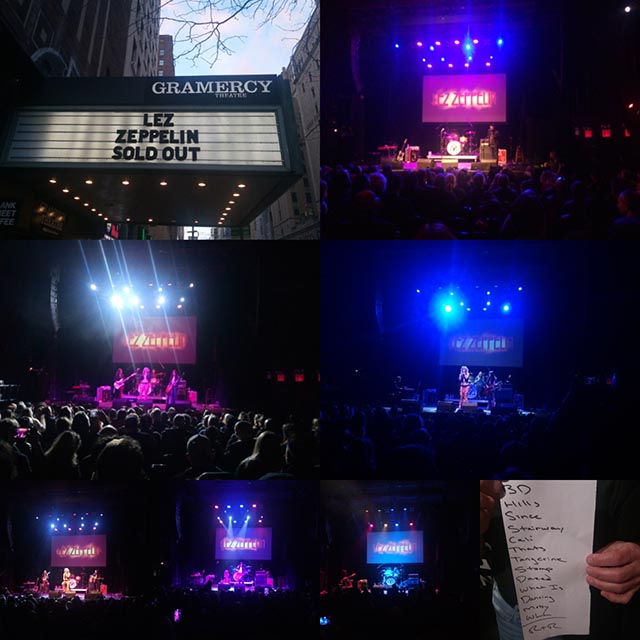