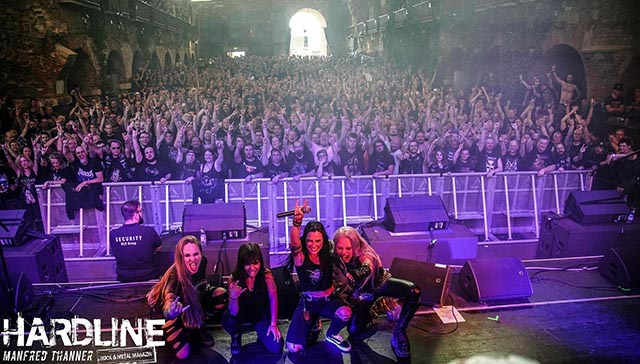 It’s a tough year for metal festivals worldwide, and European festivals are no exception. Numerous festivals had to be postponed yet another year to 2022, including the world-famous Wacken Open Air in Germany, their downsized spinoff “Bullhead City,” which should have taken place in September 2021, and the gigantic Hellfest in Clisson, France. The latter is now scheduled to take place over a whopping seven days in June 2022 and will feature a billing that includes virtually every rock and metal band on the planet.

However, 2021 thankfully, also saw a few specks of light in the dark tunnel that is Covid-19. In some countries across Europe, a select handful of festivals actually could take place.

One such lucky country is Austria, located right in the middle of Europe, surrounded by giant neighbors Germany and Italy, and a few other smaller countries. While Austria’s biggest mainstream rock festival, Nova Rock, which traditionally takes place in June, had to be cancelled due to the ongoing restrictions for events at the time, smaller festivals such as Area 53 in Leoben and Metal On The Hill in Graz could take place.

The latter is the annual festival organized by Austrian powerhouse label Napalm Records and takes place every (non-Covid) year at the Kasematten in Graz. It’s a spectacular venue, built into the remains of part of a basement of a medieval castle that once stood on a hill at the center of Graz. Hence the name of the location “Schlossberg,” which translates to “Castle Hill.”

In this picturesque venue, around two thousand metal enthusiasts gathered even during this challenging year and celebrated a bona fide heavy metal party just the way it should be.

I was lucky to be among them, and this is my recount of the event. 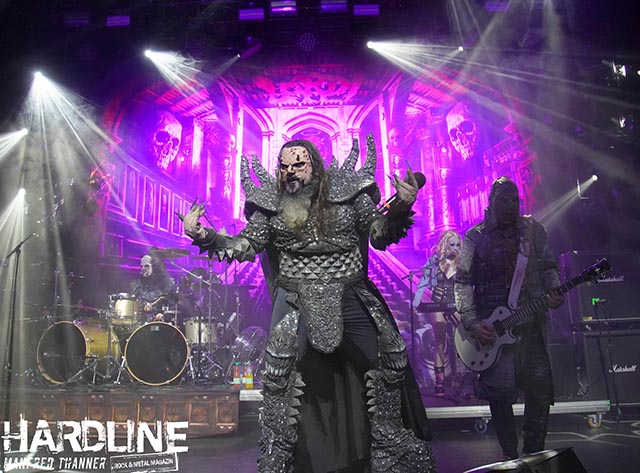 Health and safety measures were cranked up in comparison to previous iterations of the festival. Upon arrival at the venue entrance, visitors had to provide their vaccination certifications against Covid-19 or proof of testing negative within 48-72 hours before the festival day or had the disease already within the past six months.

After finally passing the check-in, we arrived at the festival just in time for the show of Italian melodic metallers Temperance, whose singer Michele Guaitoli (well, one of three singers) is also my successor as the current male vocalist in Visions of Atlantis! The hungry audience was definitely into their modern melodic metal style. Their biggest strengths were the catchy songwriting by guitarist Marco Pastorino and the aforementioned Guaitoli and their three lead vocalists, Marco, Michele, and Alessia Scolletti. The three co-lead vocals definitely ramp up the “epic” factor of Temperance’s tracks, such as the poppy “Start Another Round” and their hit single “The Last Hope in a World of Hopes” that currently boasts a whopping 4.3 million views on YouTube alone.

The following two bands could easily be described as the gimmick-metal double pack of the festival and prove that this year’s Metal on the Hill festival is firmly in Italian hands. First, Nanowar Of Steel brought their humoristic parody metal to the stage of the Kasematten, animating the audience to dance and sing along to hit singles such as “Valhallelujah.” Next up were the dwarves of Wind Rose who were digging their holes – and presumably also sweating a few gallons per band member under their opulent stage outfits with temperatures around 32°C (that’s about 90° Fahrenheit) on both days of the festival.

Things get a bit more serious with the performance of Faroese pagan metallers Tyr, fronted by Heri Joensen, whose signature raspy voice works well on the festival audience. Adding a ton of character to songs like “Blood of Heroes,” “By the Light of the Northern Star,” and epic closer “Hold the Heathen Hammer High.”

But immediately, we’re back on the less-than-serious side of things, with the gladiators of Warkings entering the stage next. This band could best be described like this: So a Roman centurion, a Spartan hoplite, a Templar, and a Viking walk into a bar… or rather, onto a stage, as it were. The straightforward power metal performed by these masked warriors indeed seemed to be just the right ingredient for the crowd at Metal on the Hill that day. They enthusiastically clapped (and mostly shouted) along to bangers such as “Hephaistos” or the Warkings’ interpretation of the classic Italian partisan song “Bella Ciao,” titled simply “Fight!” in the Warkings version. Overall, it was quite an epic performance – in fact so epic that halfway through the third song, the power on stage just completely went out. The Warkings, undeterred, however, managed to entertain the crowd still while the stage crew worked frantically to get sound and lights back on, and after a few minutes, the show could go on without further interruptions. So indeed, the Warkings did blow the speakers; Manowar would be proud.

As we approached the end of the first festival day, things took a darker turn, and Samael was up next. The Swiss extreme metal outfit was a welcome addition to this first day of Metal on the Hill, adding a touch of heaviness to billing that was otherwise more focused on Metal’s lighter and more humoristic side.

But the warriors of true happy Metal need not fear, for the Beast in Black was ready to save the day for the melodic metal aficionados yet again.

In what was probably their first bona fide festival headlining slot, the still comparatively young band around former Battle Beast guitarist Anton Kabanen was able to steal the show on this night. It proved that they are destined for greater things ahead.

With only two studio albums to their back catalog yet, the band could (and had to) delve deep into the material of those two albums (“Berserker” from 2017 and “From Hell With Love” from 2019), and the Disco metal was strong with these two. Opening with “Cry Out for a Hero” from their sophomore effort, followed by bangers such as “Unlimited Sin,” their own take on Europe’s “The Final Countdown” in “Eternal Fire” or “Born Again” from the debut album, the band manages to get the audience on their side with ease.

The particular powerhouse vocalist Yannis Papadopoulos from Greece repeatedly stole the show with his vocal acrobatics. Most notably in the band’s first and biggest hit song, “Blind and Frozen,” and of course band mastermind Anton Kabanen who supplies epic guitar solos and his trademark gravelly screamed as backing – and of course, sometimes lead – vocals.

The band recently announced their third album, “Dark Connection,” for a release later in 2021; this was a strong showing and a brilliant calling card for future headlining spots for Beast in Black.

But the festival was far from over, and we would continue our adventure on the second day of Metal on the Hill 2021. 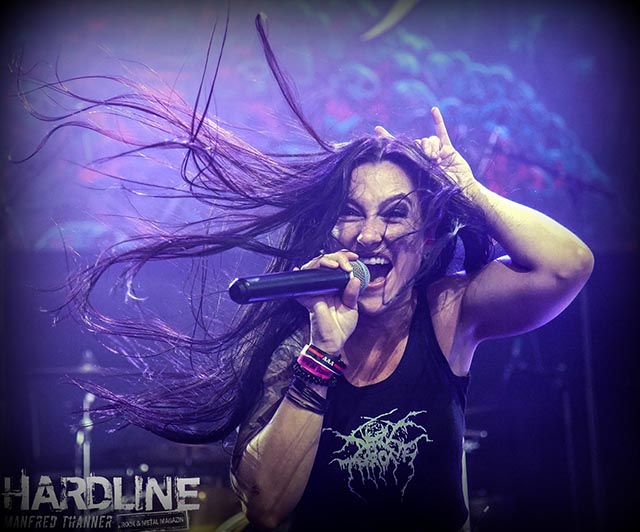 As a lover of the more melodic side of Metal, the festival’s second day would prove to be a bit of a bigger challenge than the first, even though the billing sported arguably the more prominent and more well-known bands compared to the first day.

After local Austrian opening acts Pain Is and Silenzer, with the former performing chugging groove metal and the latter being comfortably entrenched on the metalcore side of things, German self-professed happy metallers Freedom Call was the first act that was right in my ballpark. With their always-cheery attitudes, high stage energy, and uber-catchy songs, it’s difficult not to stand in front of the stage with a massive grin across your face. Highlights of the setlist include cheese bombs such as “Tears of Babylon,” “M.E.T.A.L.,” or the band’s immortal hymn “Warriors.” At the end of their show, the band seemed to encounter a similar problem of the power going out like Warkings did on the first day, but fortunately for Freedom Call, the only thing that was affected at this point was their outro playing.

After all this cheerfulness, it was finally time for the heaviest bands of the festival, starting with Brazilian all-female thrash metal outfit Nervosa. This was my first time seeing the band after their lineup change in early 2020. While Diva Satanica performed admirably on vocals, I was caught a bit off guard by drummer Eleni Nota. She didn’t seem to be having her best day, as a lot of her bass drum playing seemed heavily out of time a bit too frequently during the band’s set. But well, everyone has an off-day sometimes, and you can’t win them all.

Following the hard-hitting thrash antics of Nervosa, the festival turned darker with arguably one of Austria’s biggest and most successful metal exports in Harakiri For The Sky, who engulfed the Kasematten in sombre clouds of post-black Metal. There was also the bombastic performance by Italian sympho-deathers Fleshgod Apocalypse – their first live performance in more than a year, and incidentally signer/guitarist Francesco Paoli’s last performance before his recent unfortunate rock climbing accident. We wish him a full and speedy recovery and naturally hope for a return to the stage for Fleshgod Apocalypse very soon!

As we were slowly approaching the end of Metal on the Hill 2021, we had another dose of true Nordic black Metal – with Marduk entering the stage. They delivered crushing renditions of classics such as “The Hangman of Prague” and “Beyond The Grace of God,” as well as more recent cuts like “Viktoria.” The audience present was very appreciative of their performance, even though I personally could not get too much into the band; for me, the more melancholic approach of Harakiri For The Sky worked considerably better on this day.

Finally, we arrived at the headliners of day two of Metal on the Hill 2021, with Lordi. Catapulted into mainstream fame thanks to winning the Eurovision song contest in 2006 with their smash hit “Hard Rock Hallelujah,” the band has since been known for their outstanding and creative costumes… and their somewhat underwhelming music. Having seen Lordi live a handful of times already, I can never really get past their mediocre songwriting. For a while, the musicians perform fine, and the costumes are naturally absolute eyecatchers; the music itself just doesn’t quite match the appearance and image. All too often will unimpressive hooks and underwhelming choruses leave you wanting more, and I can’t quite shake the feeling that a lot of Lordi’s material just doesn’t live up to its full potential, which would undoubtedly be there.

This more personal assessment notwithstanding, the already considerably inebriated audience at Metal on the Hill seemed to enjoy the performance of the Swedish monsters on this Saturday nonetheless. The crowd absolutely ate it up and virtually blew the roof off the venue at the closing triplet of the aforementioned “Hard Rock Hallelujah,” “Devil is a Loser,” and the inevitable “Would you love a Monsterman,” arguably Lordi’s first big hit before they even hit their mainstream stride.

And thus, this concludes Metal on the Hill 2021, one of the few festival highlights in this unusual pandemic summer and another success for the promoter. Despite some last-minute lineup changes (Beast in Black were headlining instead of Epica, for example), the billing was top-notch, especially considering the difficulties with traveling for many bands due to the pandemic restrictions. The venue itself is breathtaking, and due to the festival sporting only a relatively small crowd of about two thousand, it never feels too overwhelming.

For the 2022 edition, Napalm Records have already announced Cradle of Filth as the first headliners. Supporting acts revealed include German folk-rockers Feuerschwanz, Lacuna Coil from Italy, Russian black metal missionaries Batushka and my former band Visions of Atlantis, performing with a live orchestra. Tickets for the festival, which will take place on 12th and 13th August 2022, are already on sale. 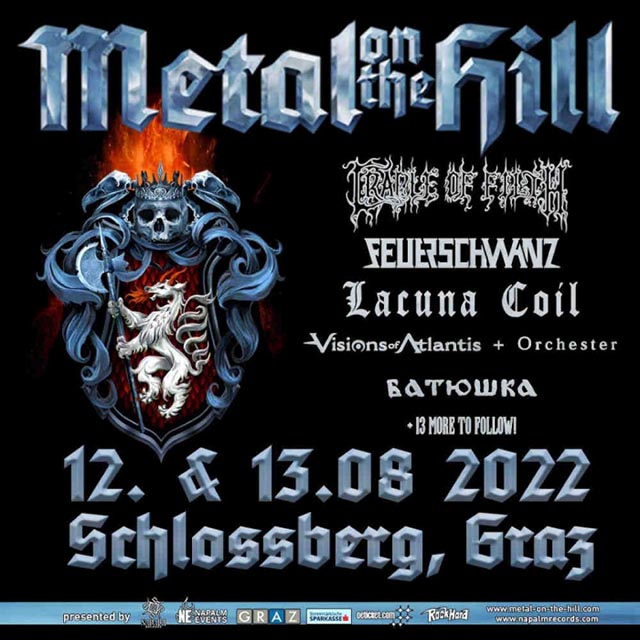 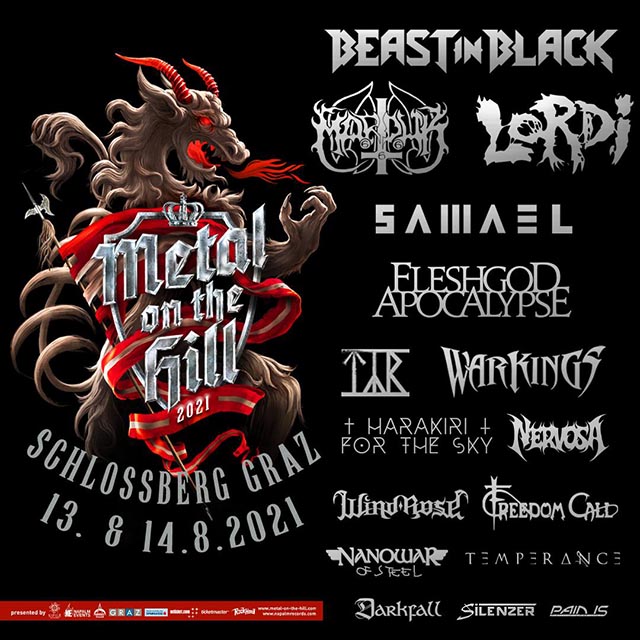