One might argue that Slipknot is one of the best bands to see live, but with excessive touring and festival appearances since they released .5: The Gray Chapter in 2014 do they still live up to the hype? What keeps their fans wanting more? Teaming up with another powerhouse from the 90’s, Marilyn Manson, couldn’t hurt, and that’s kept them on the road this year.

The tour’s beginnings were plagued by unfortunate events. Originally, the show date for The Forum was scheduled for June 14, but shortly before the tour started, it was announced that SLipknot frontman Corey Taylor, needed to undergo emergency neck surgery and the original dates for a few shows were postponed for 2 months. With the new date being a month shy of the Ozzfest Meets Knotfest, you would think that people would hold off on this show. That didn’t prevent Slipknot fans from packing up The Forum quickly for an almost-full house, though.

Observing the surrounding crowd was divided. It was somewhat easy to spot who was there for what band as the lineup was pretty diverse. There were people in regular attire, some wore costumes, and some just were black and stayed quiet next to a wall, reminiscent of the Goth Kids from South Park.

We first ran into Jose and Anthony outside the Forum VIP Club. They were ticket holders since the original date and were very eager to see Slipknot for the first time. Growing up influenced by classic hair metal bands “I’ve been to only a few concerts and this is my first major concert I am going to. So I’m stoked!” exclaimed Anthony. He first started getting into Slipknot when he was in junior high school just like his peer Jose, who as a musician himself was highly influenced by industrial metal and goth metal. He claimed that he bonded with Anthony over Slipknot.

On the contrary, we later stumbled upon a group of friends: George, Ditty, Lettie, Adrian, and Daniella who were all there strictly for Marilyn Manson. George, who was extremely influenced by the lyrical content, first started listening to the band back in 2002, watched a lot of Manson’s performances via YouTube and finally getting a chance to see him live in on his The Pale Emperor album tour in 2015. George tells us “He changed a lot! He did change a lot since before. He is more grown up.”

We spotted a father and son unit, Nate and Tanner, wearing Slipknot inspired jumpsuits. The couple were itching to bring their masks into the venue which unfortunately didn’t allow any masks inside. Seeing Slipknot four times together before, the two explained what keeps them coming back for more. “Energy, environment, and the words to the music.” Nate said. “Everything just combined just gives you a free feeling with community,” Tanner chimed in.

Promptly at 8pm, Rihanna’s song “Bitch Better Have My Money” came over the PA and 666 dollar bills with Manson’s picture started falling to the floor. The curtain dropped and out came Marilyn Manson engaging the crowd with “Angel With the Scabbed Wings.” Recently Manson has been touring through smaller clubs and venues. People have been suggesting that he is not the same or has been having some bad shows. Those people are way off. He put on an incredible performance from start to finish, jumping out into the crowd a few times in the set and belting out lyrics into his fans’ faces. It was surprising that he only did one song from The Pale Emperor “Cupid Carries a Gun,” with most of the set consisting of songs from older albums, which sounded amazing along with his voice traveling through the Forum.

The fans were ecstatic, responding with mosh pits and singing along with their favorite songs. “The Dope Show,” “Antichrist Superstar,” “The Beautiful People” and the classic “Sweet Dreams (Are Made of This)” Eurythmics cover. Although his shows are a bit tamer than what most people remembered, he still had theatrics involving backdrop changes, stage props, a tall podium and walking on stilts. With a new album, Say 10, in the works for 2017, Marilyn Manson has a lot more in store for us.

A bit after 9:30, the late David Bowie’s “Fashion” started playing on the PA, and within seconds, Slipknot appeared on stage with “The Negative One” from .5: The Gray Chapter album. Corey, still with a neck brace but with his charisma intact, quickly got the crowed engaged with his band’s performance. With so much going on onstage, the energy put out from the band quickly spread across the audience. Mosh pits broke out from the first note and did not end until the last. The set was a variety of songs from the Slipknot discography melding together new and old including classics “The Devil in I,” “Psychosocial” and “Dead Memories.” Taylor addressed the crowed multiple times saying “LA always treats the band as if they were at home!” The encore consisted of “Surfacing,” “Duality” and closed out with “Spit It Out” where the huge pit involved everyone sitting then jumping up together.

There is something for everyone at a Slipknot show. It is curious to see what they have planned for the audience next month at Ozzfest Meets Knotfest. We hope to see Corey back in top shape! If you have yet to catch them live make sure you don’t sleep on this tour package it runs through August 27. 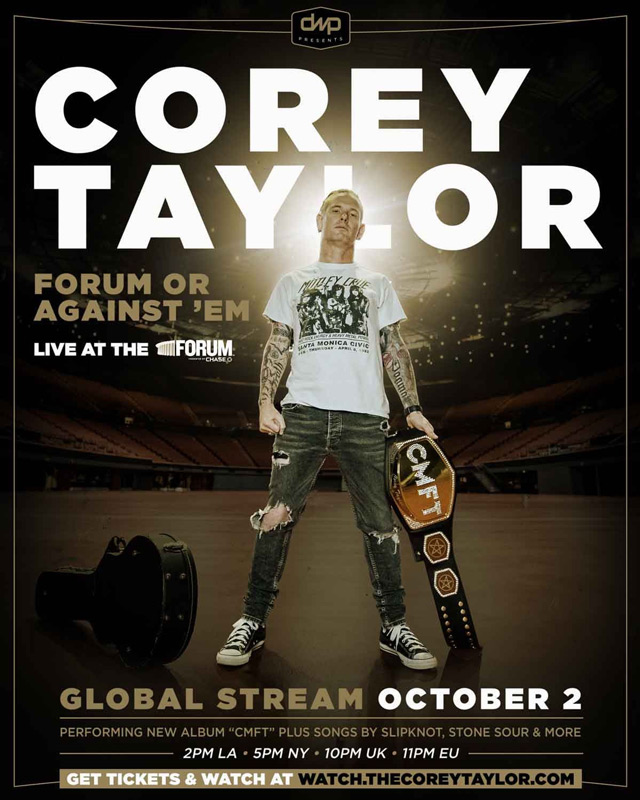