This past May 18th-20th, MAPFRE Stadium played host once again to over 140,000 people over the three days as Rock On The Range sold out its 12th Annual Weekend, and we were on hand to witness the spectacle. Marking the 6th consecutive sellout of America’s largest and most acclaimed Rock Festival, Rock On The Range had its biggest year yet with unforgettable performances from Tool, Avenged Sevenfold, Alice In Chains and many more. Featuring over 50 bands, on three stages, some bands running simultaneously, choices had to be made. 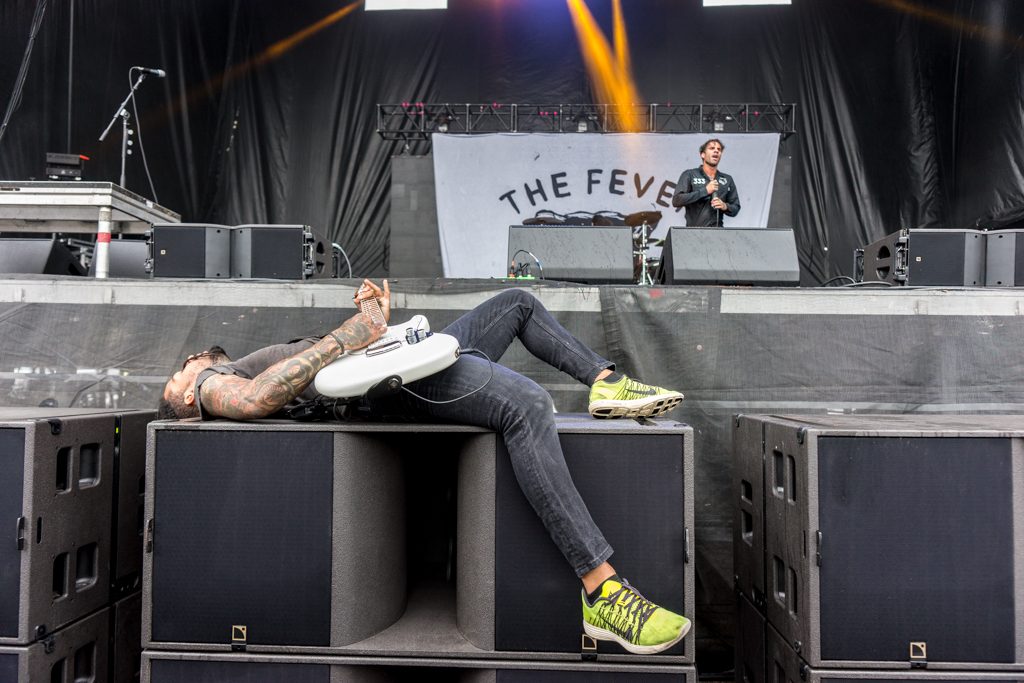 The parking lot was packed full with tailgaters, traffic heavier than usual and entrance lines longer than one would expect on the first day around noon. We arrived early, to catch one of the craziest bands to hit the scene The Fever 333. Lead by vocalist Jason Butler (ex-letlive), The Fever 333 is all about creating a voice amidst the chaos of the world today. The opening number saw Jason escorted onstage with a black bag over his head raising a fist to the air, while a KKK statement played through the speakers. Once the music kicked in, nothing was safe, the three piece from Inglewood literally tried to tear the house down and didn’t stop until their set was finished.

Opening main stage was hardcore punk band The Bronx, followed by alternative group 10 years. Shortly following on a side stage, thrash metal group Power Trip shredded through a 30-minute set. And, in what was probably the talk of the weekend, Greta Van Fleet took the main stage to perform six songs from their two EP’s. Truly looking like they stepped out of the 70’s, bell bottoms and all, everyone watched and made their own decisions on whether they are the “Led Zeppelin for Generation Z.”

Rapper Machine Gun Kelly, who called this a hometown show (even though he’s from Cleveland), put on an amazing set, adding a touch of rap to Friday, before Breaking Benjamin, and front man Ben Burnley, hit the stage and started belting out hits from their entire catalogue including “Red Cold River” from 2018’s Ember album.

Tampa rockers Underoath performed last on the side stage, setting the tone for Maynard James Keenan’s first of two appearances this weekend. A Perfect Circle took to main stage playing 12 songs, mostly slower more melodic ones, leaving the crowd torn on how they felt overall.

Closing out the first night was Alice In Chains, who tore into “Check My Brain” and delivered a 15 song setlist, that included two Soundgarden covers “Hunted Down” & “Boot Camp” as a tribute to the late Chris Cornell.

Highlight of the day:
The Fever 333 throwing mic stands, moshing with photographers in the photo pit, and even running up the Monster Energy 18-wheeler and singing from the roof. 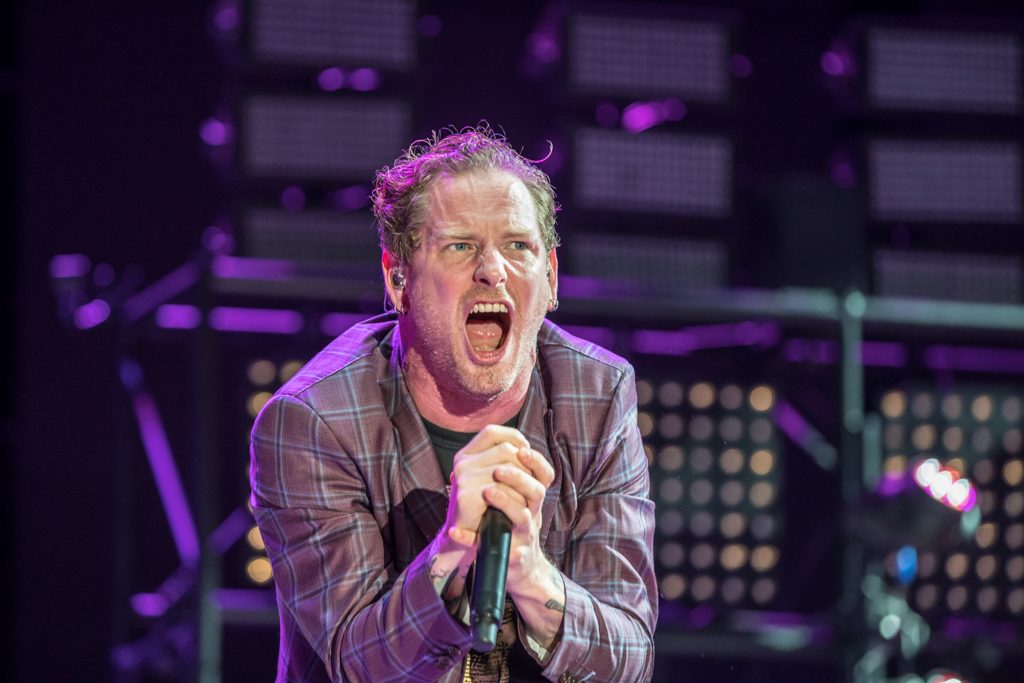 With rumors of evacuation swirling throughout the crowd, the day started off fairly good. Beautiful weather, nice breeze, and New Years Day opening the main stage. Frontwoman Ash Costello welcomed the crowd, inviting everyone to surf up and have a good time. Detroit rockers Wilson, whose stage looked like a mad science lab gone wrong, and front man Chad Nicefield with his neon green dyed hair didn’t waste any time with their 30-minute set, laying it all out almost immediately.

Asking Alexandria, Miss May I, and rapper Jelly Roll all completed their sets as the clouds started rolling in. We were invited to check out a Zippo Acoustic Session and come to find out that it was Stone Sour, who played us into the storm, as lightning struck near the stadium. Black Veil Brides were halfway through their set, when the red flag was waived, and the entire stadium was evacuated.

With a 5-hour rain delay behind us, and a cancelled set by Bullet For My Valentine (due to weather), Canadian rockers Three Days Grace took to the main stage while both From Ashes To New and Emmure took to the side stages simultaneously. Overlapping took place for the rest of the night, seeing Trivium, Andrew W.K. Stone Sour, and Tech N9ne all playing within an hour of each other.

With the midnight hour fast approaching Avenged Sevenfold took to the stage to play us into the night. Laying immediately into the over 8-minute song “The Stage”, M. Shadows and the guys played a 10-song set that spanned their catalogue and included some not so often heard songs such as “A Little Piece Of Heaven.”

Highlight of the Day:
Stone Sour’s current stage set includes streamers shot from a cannon, pyro in the form of sparklers, and wacky waiving inflatable arm tube men. Lead singer Corey Taylor has a party onstage, and the whole crowd is invited. 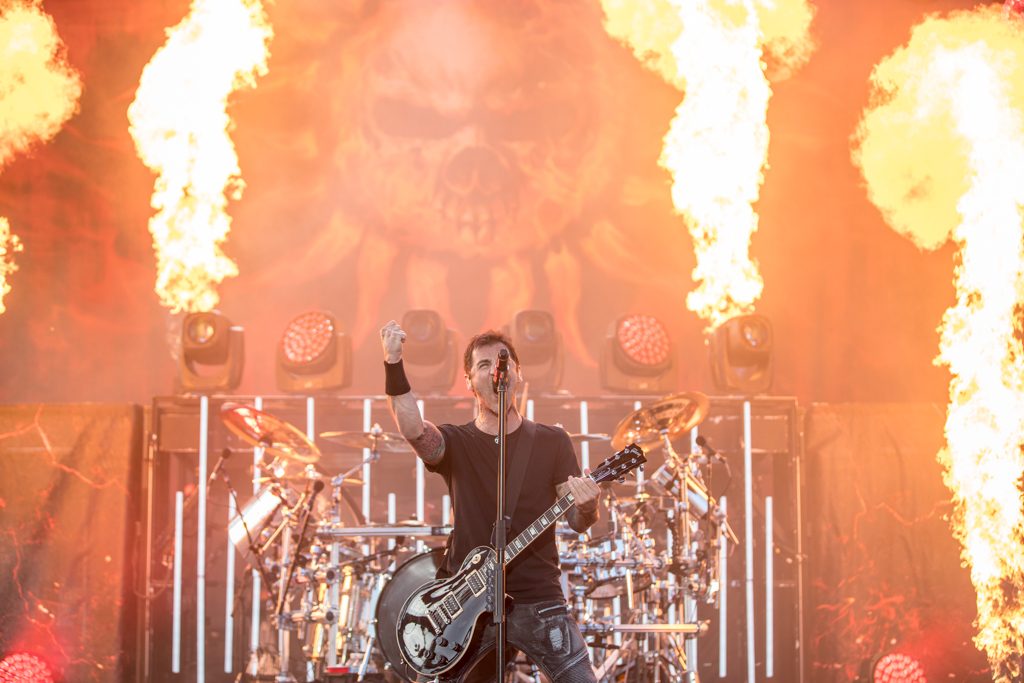 With a mix of all genres today, we checked out as much as we could. Them Evils, opened the main stage, while Stitched Up Heart and Pray For Sleep warmed up the side stages. Nick Reese, lead singer of Joyous Wolf, known for his wild antics while onstage (he was removed from Las Rageous earlier this year for climbing the stage rigging) danced their set away with back flips, slides, and mic throwing to name a few.

Tyler Bryant & The Shakedown, Shaman’s Harvest and Red Sun Rising all played sets that drew fairly sized crowds and had them singing along with every word. Michigan rockers We Came As Romans hit the side stage hard, inciting circle pits, crowd surfing and overall pandemonium. I Prevail’s unclean vocalist Eric Vanlerberghe played a flute recorder as they walked onstage, before tossing it into the crowd and laying into heavy hitting RISE off their 2016 album Lifelines. Shortly following, Anti Flag saw a Donald Trump costume crowd surfer surf to the stage while they sang F*ck Police Brutality and died laughing.

The Used, lead by Bert McCracken looked to have the most fun all weekend, just belting out fan favorites, and generally having a great time on stage. While Yelawolf, brought a bit of the country to Columbus, with banjo driven southern inspired hip hop on a side stage. Stone Temple Pilots lead by new singer Jeff Gutt, was another highly anticipated group to watch, as fans were waiting to see if he could live up to their expectations. During and after the set crowd members were extremely impressed by the vocal ability and cleanliness of his performance.

Babymetal, down a key member as Yuimetal was missing, headlined the side stage before Sully Erna and Godsmack lit the place up with fire, literally. Small pyro was introduced during their newest single “When Legends Rise” before hard hitting 1000hp had flames shooting over 50 feet in the air touching the rafters. Godsmack played a variety of songs including many fan favorites, before turning the stage over for Maynard’s second performance of the weekend as Tool closed out the weekend.

Standing in an army tactical uniform at the back of the stage on a riser, Maynard stayed out of sight as usual, and the stage stayed dimly lit to begin. As the setlist played on, more and more came to life, more screens lit up, more lights turned on, until it was a full out lighting spectacle. Using both the music and the visual aspects available, Tool put on an overall amazing show, and was a great closer for this years Rock On The Range.

Highlight of the Day
Battle of the Bands winners Pray For Sleep opened the side stage, and walked out to graduation song, “Pomp and Circumstance.” We came to find out that two of their members skipped out on walking across the stage for their High School diploma so they could be seen by thousands.